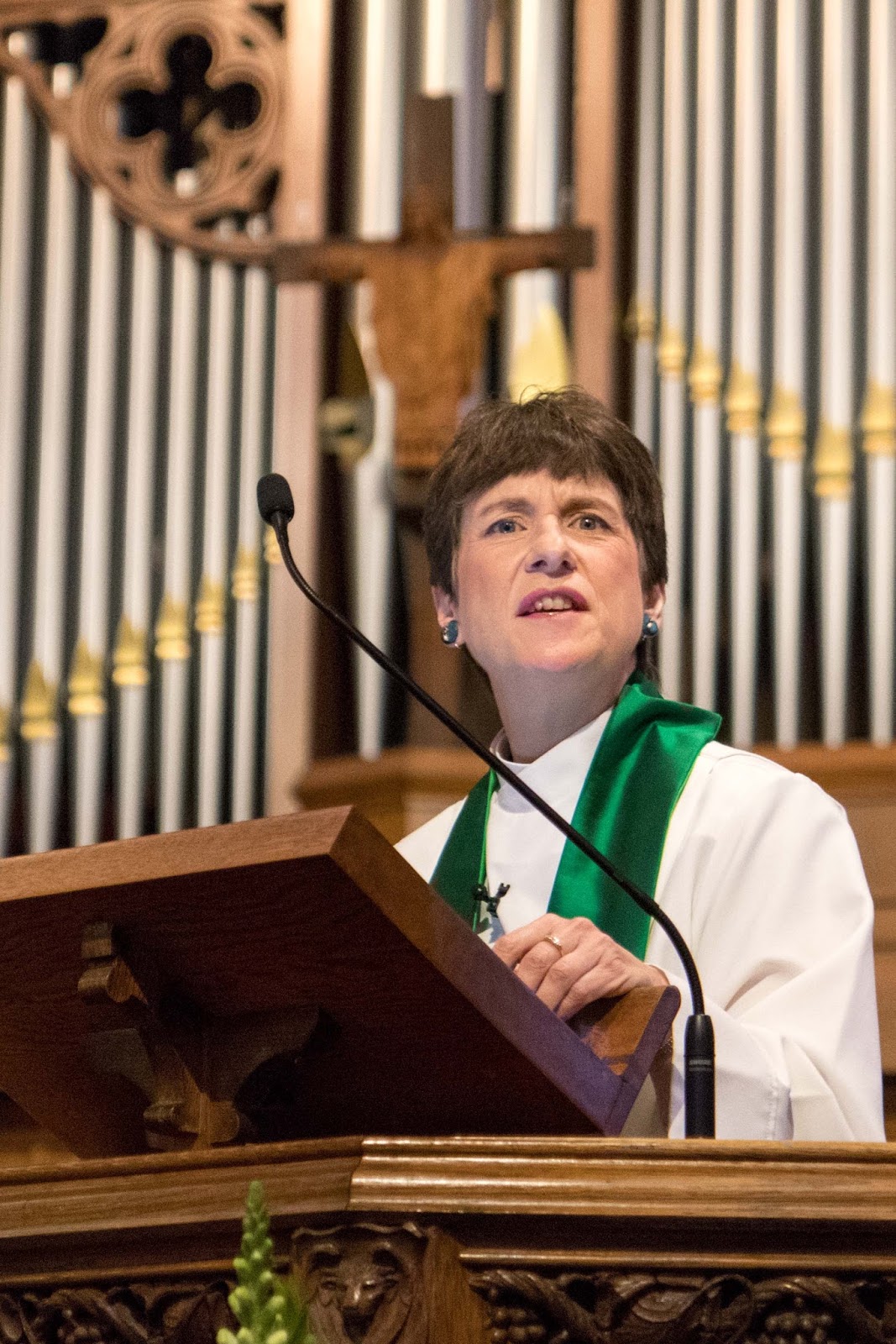 It’s Independence Day weekend. This is a holiday when we celebrate freedom, when we celebrate the unique character of the United States, formed and shaped by the same men who also shaped the governance of our own Episcopal Church. It’s a secular holiday, but the 4th of July is also named as a major feast in our Book of Common Prayer (it’s on page 17 if you want to look it up), and the values embedded in this country’s foundation are Gospel values of freedom, truth, and the right to speak and to be heard. This nation finds its identity in those who gave up everything they loved and owned to follow God’s call to a distant land, much as Abraham once followed God’s call.

Now, human beings have not been at their best at times of migration and colonization. The Israelites wiped out whole city states as they took over the promised land. On this continent and others, European colonists, whether English, Dutch, or Spanish, have massacred, enslaved, imprisoned, starved and infected indigenous people.

This story of Abraham and Isaac is troubling on a number of levels. Who would prepare to kill their son, their only son, whom they love, simply to prove their trust in God? We would certainly regard someone who did that as mentally unbalanced. It’s not a story we want to take literally. But taken as a parable, it has something to teach us. The story is rooted in the ancient Middle East, inhabited at one time by peoples who routinely sacrificed their children in an attempt to appease their ruthless gods. This horrific tale actually tells us that, as part of the separation of Israel from her neighbors, the people of God turned away from child sacrifice, even as they demonstrated their trust in the God who had led them to the promised land. It’sa reminder that our story of faith has always been told in a diverse world, with the other close at hand and with cultural differences to address.

A detail that really troubles me is the absence of Sarah, Isaac’s mother from the story. Apparently Abraham decides to do this awful thing without consulting his wife. As a woman, she is given no voice, no vote. I’d like to think that she wouldn’t have gone along with Abraham’s homicidal plan. So, perhaps inadvertently, the story also reminds us of how wrong it is to silence large portions of humanity.

Last week I attended a course in Latino Cultural Competency for Episcopal leaders. It was an intense course where we combined book and classroom study with experiential learning. Since we were in South Texas we also got a cultural immersion experience involving great barbeque and Tex-Mex food.

I learned some history about this continent. I learned about the Spanish conquistadors and missionaries of the 16th century; about the skullduggery in the US government in the 19th century to trump up excuses for war so that the US could take back huge swathes of land from Mexico. I learned about the suppression of indigenous voices and the relabeling of people who had lived in the south and southwest since time immemorial as aliens, worthless peasants, interlopers on the white man’s land.

One of my classmates was astonished to learn that the corner of Kansas where she ministers was once in Mexico. There’s a saying in southern Texas: we didn’t come across the border, the border moved across us. The original inhabitants of the land lost the freedom to choose who would govern them or how they would organize their devotional life. We learned that the Franciscan missionaries forced the indigenous people to become Catholics, at the point of a sword. Their traditional celebrations and observances were banned. Their priests were murdered. The voice of the people was silenced.

That was centuries ago, but I also heard stories last week of churches in our own time, where they pretend they are Catholic to lure in Latinos, where they hide the Guadalupe image when the Anglo congregation worships, where they refuse to reach out to second and third generation Latino Americans, even though they outnumber first generation immigrants, those born in other lands, by 2 to 1.

As people of privilege, as members of a church that loves its traditions but which is falling short at bringing the Gospel to the next generation, we may need to sacrifice something precious if we are to be faithful to God’s call. As we look at the young people in our communities, we don’t see them flocking to church. The things that we cherish as part of our tradition are not so important to them: they don’t see the attraction of sitting for an hour in a big stone building and listening to someone in funny clothes lecture them But they do long for connection, for important work to do, for opportunities to help make the world better and more free. The church is called to form disciples, to equip the saints, to offer transformation through the love and compassion of God, and to do those things no matter what it costs.

In Matthew’s Gospel Jesus continues the theme of welcome which we heard about two weeks ago. We talked about being a welcoming cathedral at that time, if you recall. Today we hear a startling expansion of the message: whoever welcomes you welcomes Jesus, in fact welcomes God. This teaching of Jesus is so important that it shows up in all the Gospels, in one form or another. Imagine how that might work if we took it seriously. We are instructed to see God in the face of every stranger, and we should expect to be treated like Jesus himself by the other Christians we encounter. Wow. This is a huge challenge. Think of all the ways Christians have shut out the other over the years: the dark-skinned confined to the slave gallery, the wheelchair-bound stuck at the bottom of the church steps, the person with an overstuffed wire cart stopped at the door, the woman banned from the altar, the non-English speaker or non-reader baffled by our Prayer Book. What if each of these people were Jesus?

Today, as we celebrate the Independence Day holiday, it’s natural to turn our thoughts to welcome on a broader scale, a national stage. People come to this country seeking freedom: the freedom to practice their faith, the freedom to work and improve their living conditions, the freedom to speak and to vote. We aren’t always great at welcoming those who have come more recently than we have. We hear a lot of nonsense about the dangers immigrants pose: for example, the statistics for crime by immigrants are absurdly inflated. The border patrol agents my class met with last week in Laredo told us that of the hundreds of people coming across the border illegally, 5% are known criminals, and in many cases their criminal record consists simply of the other times they have tried to enter the US.

Politicians spout alarmist reports about foreigners taking American jobs, while American business owners move their factories abroad to maximize profits for a few. We see European Americans becoming a minority, and we hear languages other than English spoken more and more in our communities. It is scary to feel our power and privilege diminish, precisely because of how we have treated the other in the past, and so we try to silence them. We make it harder to get a visa or a green card. Local governments try to pass laws preserving the advantage English has in public discourse. And even when we aren’t doing it deliberately, we silence our neighbors from other cultures by neglecting to accommodate their social norms, assuming they will know how to elbow their way into a leadership role or vocally promote their own interests in the way that European Americans do routinely. Yes, our way of welcome leaves much to be desired.

But this country, in its very DNA, is a place of welcome, a place of refuge from hatred and oppression. While we sorely need to repent of the way the first Europeans treated the indigenous peoples of this continent, while we equally need to repent of the enslavement and involuntary relocation of Africans and other people of color, the legal and moral foundation of this country is clear: all are created equal, all should have equal opportunity to thrive, all are to be free to honor their diverse cultures, languages, and faiths. The celebration of this country’s unique commitment to freedom is not only secular but is a Gospel value, for we were created to be free, and our God is a God who leads us from death to life, from silence to singing, from captivity to freedom.

One morning last week our class spent time with a woman called Frances. Frances left Honduras as a young woman and set out to walk to the United States, in search of a better life. She walked some of the way without shoes. She walked alone and with groups of strangers. She was kidnapped, threatened with death, and held to ransom, but engineered an escape. She slept on people’s porches, wrapped in a garbage bag to protect her from the rain. She came to this country 13 years ago and has worked hard to get to a point where she can apply for legal residence.

As Frances told her story, tears trickled down her cheeks. She referred again and again to faith, to how trust in God was the only thing that kept her going, telling us that God answered her prayers over and over, and that she continues to put all her trust in God because God is all she’s got. She was grateful to us for hearing her story, for giving her a voice to share her witness of faith. Frances gained her voice because her Episcopal priest heard her and invited her to talk with us, a group of church leaders from all over the Episcopal church. And now her voice is being heard through our voices: in Southern California and Massachusetts, in Oregon and Kansas, in the Presiding Bishop’s staff and in seminaries.

The story of Frances echoes the story of Abraham, who put his whole trust in God. Her story is the story of this land, the story of people who gave up everything in order to come here and find freedom. Frances gave up her safety, her family and her home. She is not truly free yet, although she carries paperwork in her purse that says her residency application is in process. Freedom is within reach, and she has given up an awful lot to strive for it.

Let us pray. Lord God Almighty, in whose Name the founders of this country won liberty for themselves and for us, and lit the torch of freedom for nations then unborn: Grant that we and all the people of this land may have grace to maintain our liberties in righteousness and peace; through Jesus Christ our Lord. Amen.