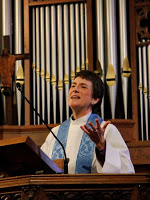 Christmas preparations have a way of bringing to mind old family traditions and conversations. When I think of the Christmases of my childhood I envision the special, handpainted china that we used at Christmas dinner, and recalling the festive table, I immediately hear my mother’s voice, saying things like, “Children are to be seen and not heard,” “Don’t talk with your mouth full,” and “Elbows off the table unless you are an aunt.” That one only worked until I actually became an aunt at age 8. The mantras of our childhood never completely fade away, and I think that’s why this Gospel’s description of John the Baptist makes me a little uncomfortable. You see, the traditional statue of John depicts him with arm outstretched, pointing away from himself like an ancient traffic cop. I think of that image, and I hear my mother’s voice saying, “It’s rude to point.” But maybe it’s time for me to erase that tape. Maybe we should all be pointing. Pointing to Jesus.

Today’s odd little story from the fourth Gospel tells us of a conversation between John, a man sent from God, and the religious authorities who were anxiously awaiting the Messiah, the one chosen by God to save Israel. John had become famous for his ministry of preaching and baptism on the banks of the Jordan, so the authorities sent messengers to ask him, Who are you? And the text says “he confessed, I am not the Messiah.” What a strange way to put it. Another way to translate this sentence might be to say, “He told them plainly, I am not the Messiah.” In fact, this whole passage is told very plainly, in short, simple sentences and in terse questions and answers. John twice says, “ I am not.” And then simply “No.” He could hardly tell them more plainly that they are barking up the wrong rabbi. But the Gospel writer goes further. John is giving testimony, we are told, witnessing to the truth, pointing away from himself to the one who is coming after him. He even uses the words that Jesus will later use to identify himself with God: the mystical phrase “I AM”; only of course John says “I AM – NOT.”

So, who is John for us? He is the one sent to show us how to point to Jesus. In this Gospel, John is the first person to recognize Jesus. In the verses just after today’s passage, John runs into Jesus and says to his own followers, Look, here is the Lamb of God; and for the first time, at least in this telling, people start to notice Jesus and to listen to what he has to say. This is before Jesus has done any teaching or any miracles. Nobody realizes who he is until John points to him. So, John is sent from God to point to Jesus and witness to his identity, because otherwise people won’t know who Jesus is.

Last week I participated in a conference call with other diocesan leaders, to share information about the Lilac fire in North County and to learn what we could do to help. The good news was that no members of the diocese had been hurt or lost their homes. There were several well-functioning official shelters for evacuees. But there were two items that pierced my heart: undocumented people were afraid to go to the shelters in case they were arrested; and homeless folks driven from the canyons by the fire were not being made welcome at the shelters. Our diocesan staff, thankfully, were working to find an alternative shelter where such people would feel truly safe and truly welcome.

Why do we do this? Why do we take the trouble to care for those who are on the margins, who aren’t acceptable to the mainstream for one reason or another, who are overlooked and unheard? You already know the answer. We do it because we promise in baptism to seek and serve Christ in all people. We do it because our Judeo-Christian culture is unambiguous in insisting that the mark of a civilized society is the care of the last, the least, and the lost. We do it because, like John the Baptist, we see Jesus in the crowd and we are called to point to him wherever he shows up, to say with John, “Look, here is the Lamb of God. Here is the one we have waited for.” So, with apologies to my Mama, it’s not rude to point if you are pointing to Jesus, because, how else will people recognize him in each other?

And, while we are exercising our pointer fingers, while we are being absolutely clear about who Jesus is, we are also to point at the broken places in our world where the light of Christ needs to shine, where truth is obscured, where the essential worth of every human being is not treasured. Wednesday’s vigil for victims of gun violence gave us an opportunity to shine a light on the horrific national epidemic that claims at least three Americans, every hour of every day.

Like John, we are all called to witness to the truth and light of God’s inclusive love. The testimony of John is the testimony of the church, the voice calling out in the wilderness, “Make straight the way of the Lord.” Christ is coming, Advent tells us so, but it’s up to us to point to him, to witness to his truth, and to make sure that the world knows him when he comes.