Skip to content
Home > News > The Sunday Sermon: Places in the Heart 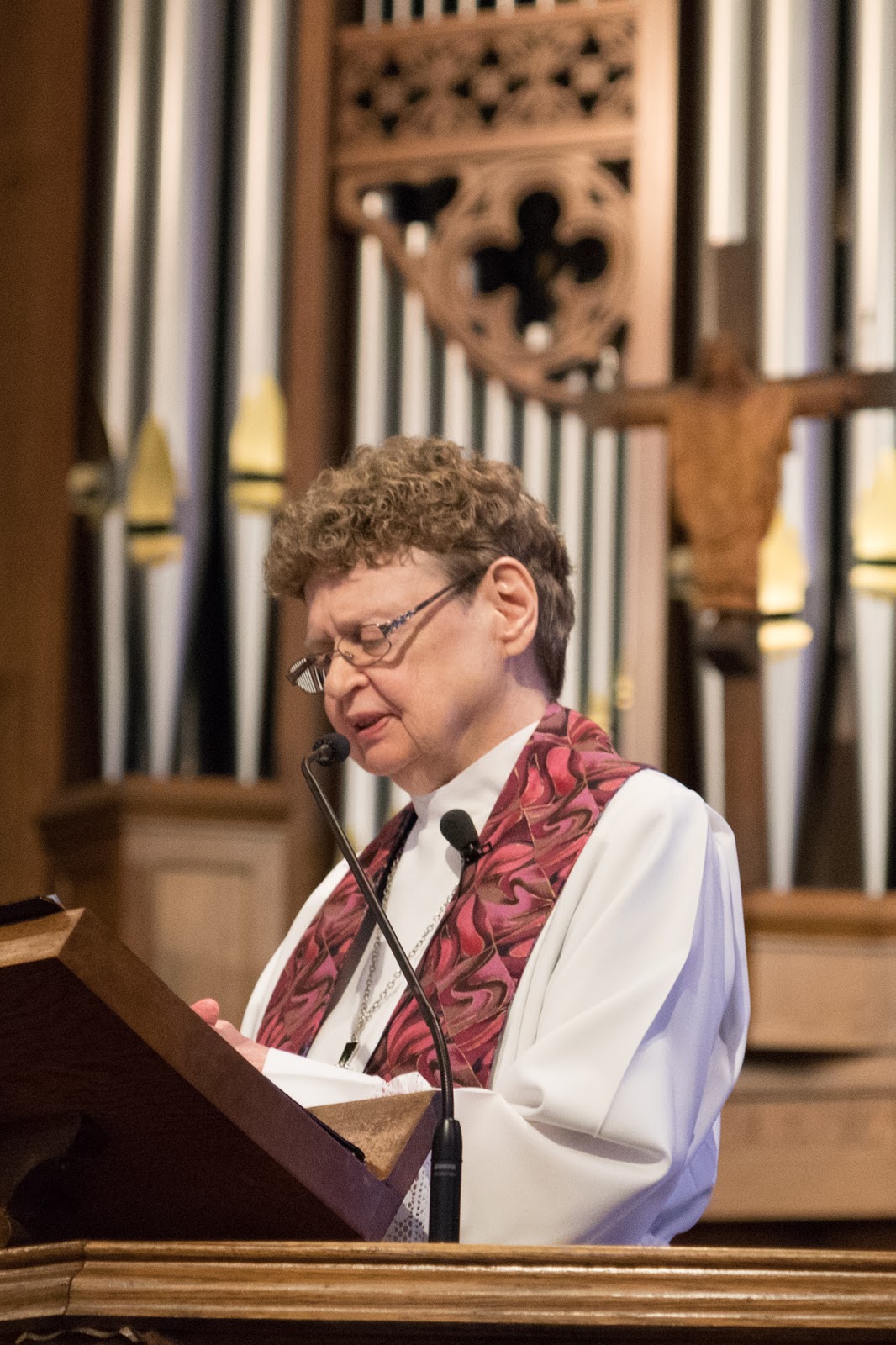 Today is the 1st Sunday of Lent, 2017 – a season that draws us on, from the Incarnation of our Lord, from the starry sky of his divine manifestation, into the lengthening daylight of a more introspective season. For today, we ponder in our hearts how the Holy Spirit, who visited Mary, who gave Jesus life in the first place, and who blessed him at his bap-tism; how the Holy Spirit has now driven Jesus up into the wilderness – so that he may be tested during these 40 days and 40 nights, for the hard journey that lies ahead. What a change in perspective this is for us all – as from the glorious vision on the Mt. of Trans-figuration, that dazzled our eyes just last Sunday, we come now into this desolate place.

For then, the disciples saw the shining face of Jesus revealed, at high altitude, where God even spoke to them from the bright cloud – now God’s Beloved Son shows forth the face of his human determination and conviction. Pared down. Flint hard. Uncompromising. Here in the wilderness, all sound is absorbed, we notice, and the silence is deafening… Yet, after 40 days and 40 nights, the silence is broken by the combat of Jesus with Satan. This is no mere word game, nor test of debate skills, no scriptural quiz show to reveal the weakest link. It isn’t a question of who knows scripture better… For, when Satan attempts to deploy scripture as a weapon, it fails. The combatants may seem equally skilled, yet, it is Jesus, who prevails. And angels come to minister to him, as Satan slinks away…

Think of what Satan offered… Bread?! Yes, hungry people must be fed. Yet, all good things come from God’s Providence, to feed so much more than just our bodies…

Physical safety? Jesus will not test God on this point… Political power? It will be cen-tral to the justice of the coming realm of God. Yet not power at any price, nor power for it’s own sake. Certainly not power from bowing down before the personification of evil, and worshipping its malevolent form! Having fasted 40 days and 40 nights, Jesus clings to bedrock truth, and to God’s commandments. For this combat is about spiritual allegi-ance and purity of heart. “Worship the Lord your God, and God only shall you serve.”

And while it’s true, that Jesus affirms the value of Satan’s bait: food, security and power,

He will not compromise his own integrity. Jesus stands firm, holds fast to God’s truth. He prevails with faith, not with force. And he steadfastly refuses to take credit – or to cast himself in the role of hero. Soli Deo Gloria. “To God alone, be the glory.” The real bat-tle, Jesus shows us, is waged and won in the believer’s heart, where our foes are internal… where we are tempted to fall prey to self-confidence, self-interest and self-promotion. We are tempted to confuse ends with means, to rationalize everything, every day, every step of the way, in the form of a self-centered triumphalism; all the while thinking that righteousness personified leads to personal pride and praise. Not by this season’s light…

For Jesus, born and blessed by the Holy Spirit, knew that listening to Satan is always catastrophic. Listening to God alone is what we all are called to do. Jesus’ own life was now set on a course that could end in no other way than in a direct and final confronta-tion with this tempter, who promises what can’t be delivered. The stakes are very high, indeed… Who would have the last word over the future of this world? The Spirit of God, or Satan? There could be no compromise with this tempter, who spoke to Jesus in the desert. These two would constantly encounter one another in the months to come, until that final moment in another desolate place, called the Garden of Gethsemane… The temptations presented to Jesus there, will echo, throughout his hard journey to the cross.

Along the way, Jesus had to constantly warn people against speaking about his mighty deeds, lest those very deeds be turned against him. And, there would be other taunts, about turning stones into bread: As for the 5,000, not counting women, children and the elderly, who were fed in the wilderness from five loaves and two fish, they would want him always to feed them. To give them their daily bread. People would pursue Jesus as a miracle worker rather than as God’s beloved Son. They would see how powerfully the word of God worked through him. So that he would have to say, “Your sins are for-given,” before saying “Take up your bed and walk.” For the two were conjoined in him, and release from suffering wasn’t the only end in view, for his mission and ministry.

And, in the end there would be another taunt… to throw himself down from a high place:

“Come down from the cross, if you are the Son of God.” Do the spectacular, then we’ll believe! There would be constant pressure for Jesus to wrest the mantle of power from the dominion of this world, in order to accomplish God’s purposes. The people yearned for one to come, who would throw off the yoke of Rome. Even his disciples kept looking for him to do that. “Let one of us sit at your right and the other at your left in your glory,” James and John said. Even on the triumphal entry into Jerusalem – the tempter was there again, in all the “Hosannas,” and acclamations of “blessed is he, who comes in the name of the Lord.” “If you will bow down and worship me – I will give you all this!” was the echoing whisper in Jesus’ ears.

Knowing all this, it shouldn’t surprise us, that Christ’s Church sets aside 40 days and 40 nights as a time for examination of the whole community of faith. In the early church, Ash Wednesday’s penitential prayer called for any who had committed “notorious sin” to repent and do penance befitting their deed, so that they might be returned to the fold. That prayer was offered on our behalf, just last week, and I suspect that most of us didn’t think the term: “notorious sin,” applied to us, for we assume that none of our sins are excessive or dramatic enough, to be counted as “notorious.” Yet, the Church crafted this prayer out of the early experience of persecution and oppression: Those who were not strong enough to resist, those who had betrayed their Lord, informed on their neighbors or paid bribes to be left alone, they had, in the eyes of the Church, “sinned notoriously.”

Then, as now, private sin had public and political consequences. Lent became a season to refocus on love of God and love of neighbor, so that a homecoming might be possible, and Community in Christ restored. Even today the Church wrestles with “notorious sin” and its consequences in all parts of the world, on all continents, as we learn in daily news reports, and as we face the fears of extremist ideologies… that lead to threats of terror in places where the Church has been persecuted in the past, and even now is being persecut-ed – places where the Church, too, has been and sometimes still is complicit in wielding illegitimate, oppressive power… where fear for survival drives neighbors to hate, to be-tray, even to take lives. In all of these places, the Church agonizes over notorious sin. And yet, the Church in this season, is called to offer a healing absolution in response to heart-felt confession, truth-telling and repentance – so that reconciliation and restoration to right relationship is possible – between neighbors and nations, all around the world.

And, lest we think that Lent is only for the sake of others: our own spiritual fasting, lis-tening, and reflection leads us into our own personal self-examination, repentance, con-fession and absolution. And yes, a Holy Lent leads us toward our own personal recon-ciliation with God and our neighbor, as well. For the false gods of self-righteousness, arrogance, isolation, lust for power, even vengeance – these idolatries are always with us – always ready to lead us astray. And yes, the tempter will return, again and again, for sin is “always crouched at the door” of our hearts, “looking for an opportune moment.” Yet, the Good News is – that we are not left alone in the wilderness of our struggles…

For God sends angels to us, too, who bring God’s Spirit, to touch & restore us. These visi-tations will come suddenly – when we least expect them, when we are most exhausted & vulnerable, they will bring the Love of God to us – when we are most in need, they will come, to lift us up. Therefore, in our worship & service of God, Jesus’ mission & ministry continues, as we bring our own witness into his Story of Salvation, his story of freedom from oppression, with justice, mercy and love. For yes, as Jesus has shown us today, we are not left to languish in a desolate place. And so, even with traces of ashes still on our brows, we move out – from the innermost places of our hearts, into all the earth. That is what the hard journey to the cross requires & the Holy Spirit strengthens us, on the way.