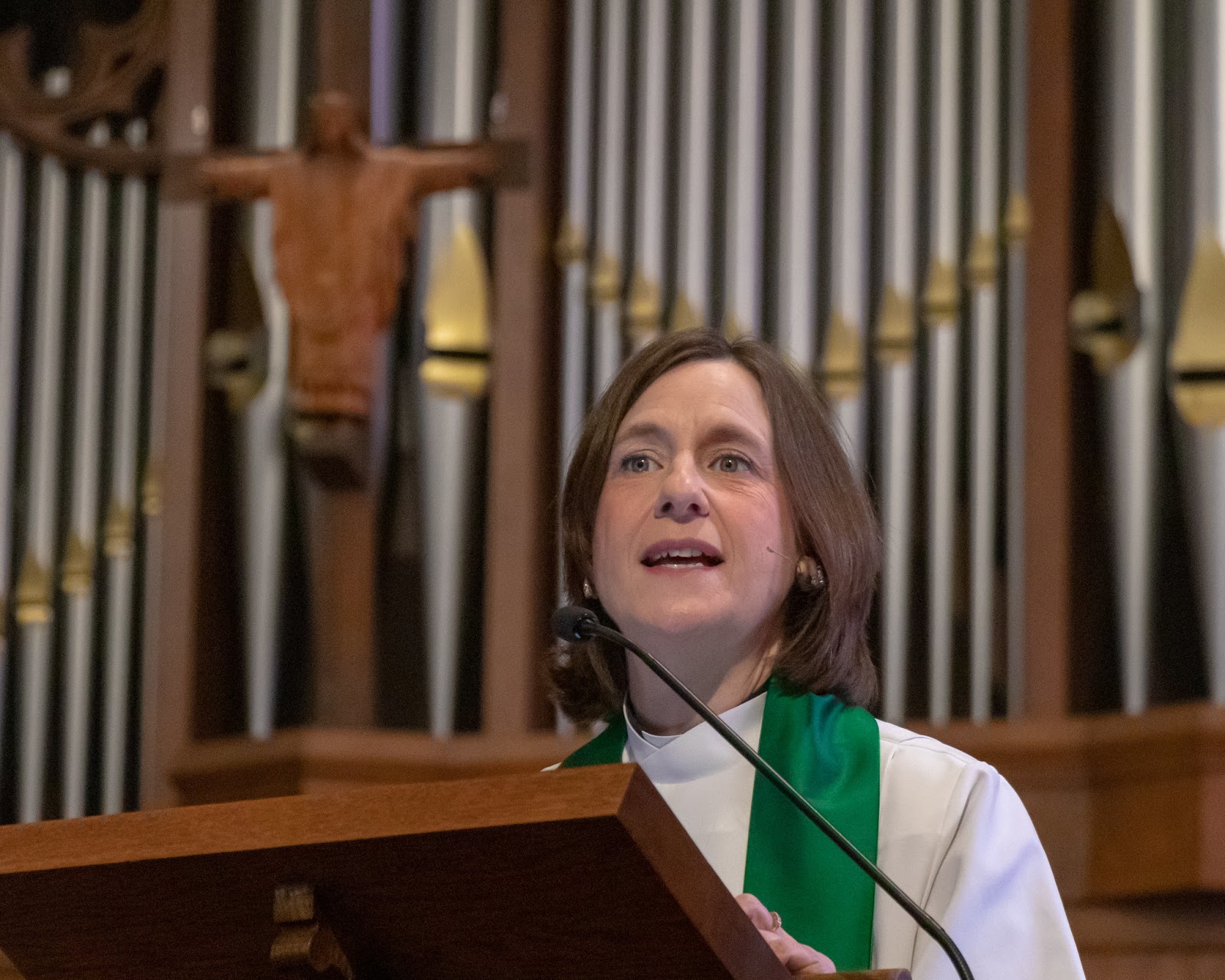 When you hear Scripture stories, do you ever get pictures in your head? The parable of the unjust judge and the feisty widow conjures up a vivid image for me, of a tiny woman, beside herself with righteous indignation, shaking her walking stick in the face of the pompous judge who is peeking out of a window, not daring to open his door.

The widow brings to my mind an image I grew up with, the character of Grandma created by the cartoonist Giles, almost spherical, always dressed in black, always with a shabby hat and an umbrella, and completely lacking in teeth, a comically ferocious figure whose determination struck fear in the hearts of the unjust and unkind everywhere she went.

In the Bible, widows are portrayed by two contradictory images. The stereotypical widow is weak, marginalized, voiceless, and without resources. We see her taking her only son to be buried or slipping a coin into the collection box at the temple. The Jewish Law names widows and orphans as the most vulnerable members of society. Those with resources are commanded to take care of widows, to leave the edges of the harvest for them to glean, even to marry their brother’s widows so that they will be provided for.

But then there are the scrappy widows, whose courage and initiative places them in the story of salvation.

When Tamar, the daughter-in-law of Jacob’s son Judah, was widowed without children and her brothers in law declined to do their duty by her, Tamar tricked her father in law, into impregnating her, and she produced twins who fathered the clans of the tribe of Judah.

When Naomi lost her Moabite husband, and decided to return home to Israel, her Moabite daughter in law Ruth, also a widow, went with her, and so impressed Boaz, a member of the tribe of Judah, that he married her. King David was their great-grandson and an ancestor of Jesus.

Luke’s persistent widow is definitely in this second category of scrappy widows. Our translation quotes the corrupt judge as saying, “because this widow keeps bothering me, I will grant her justice, so that she may not wear me out.” In fact, the original language uses the vocabulary of the boxing ring. “This woman is going to keep beating up on me: I’d better give her what she demands before SHE gives ME a black eye.”

So now you can add boxing gloves to your mental image of this determined woman. It’s a comical image, but there’s nothing funny about a system where the odds are stacked against those who have little power. A civilized society should have concern for the helpless built into it, and those entrusted with the administration of justice should have particular care for those at the bottom of the heap.

Our Old Testament reading comes from the “complementary” option of the lectionary. The Genesis passage complements the Gospel because of the fighting spirit of the main characters in both stories, boxing in one, wrestling in the other. You may remember that Jacob was a twin; he and his brother Esau wrestled each other in the womb, a sign of the sibling rivalry that would direct their lives. Jacob emerged from the womb grabbing onto his brother’s heel, desperate not to be left behind, and the name Jacob or Yaakov means heel-grabber.

Jacob’s story is full of tricks and deceit. He tricked his brother out of his birthright and their father’s blessing, with the result that he had to flee to his mother’s family before Esau could catch and kill him. He met his match in his Uncle Laban, who hired him to work for seven years before permitting him to marry his daughter, but then tricked him into marrying older sister Leah before he was allowed also to marry Rachel, his true love. Rachel herself tricked her father out of his household gods. And when we catch up with Jacob at the river bank, he is on his way home to face the music, and his brother, after 20 years away.

Now Jacob is alone and vulnerable. He’s in the dark and he is by a river. Vulnerability, darkness, water: it’s like he is back in the womb. And, just like when he was in the womb, he has a wrestling match. His opponent is mysterious – a “being” is a better translation than “man”, and they are evenly matched until the opponent, eager to escape before dawn, lands a lucky strike and disables Jacob. We never know for sure who the “being” is, but as the sun rises on a new day he blesses Jacob by giving him a new name, Israel, that means “God-wrestler”, so Jacob draws his own conclusion. “I have seen God face to face,” he says in wonder. So Jacob is reborn as Israel, and he goes on his way, wounded but alive, to face his brother and his fate, ready for a new beginning, a new life in the land that will now be named for him.

Heros and heroines who are willing to fight for survival and justice. Underdogs – stubborn widows and flawed younger brothers – who persist against the odds and achieve renewal and opportunity. These are the unlikely characters who carry forward the story of salvation, and whose efforts today continue to move us forward towards God’s dream of peace and justice.

This week our nation lost a hero who fought indefatigably for justice, who beat the odds and rose above poverty and prejudice to become one of the most influential men of our time. Elijah Cummings was the son of sharecroppers who moved to Baltimore to give their seven children a better life. Elijah started his struggle for justice early in life, braving threats and violence to help desegregate a neighborhood swimming pool when he was just eleven years old. Just as Jacob walked with a limp after his encounter, Mr Cummings carried on his face a scar carved by a bottle that someone threw at him at that swimming pool. But he persisted.

His career took him from student government at Howard University, to a distinguished law practice, to the Maryland House of Delegates, to the Congressional House of Representatives, where he served for 23 years, ultimately as the chair of the House Oversight Committee, where he played a leadership role in the current impeachment inquiry until just a few days before his death on Thursday. He wrestled the demons of injustice, racism, and corruption every day of his life. He held accountable the powerful who, like the judge in our Gospel story, withheld protection from the most vulnerable. He took to heart the words of St. Paul in his letter to Timothy, to “Proclaim, be persistent, convince, rebuke, encourage.” He gave a voice to the voiceless, he gave metaphorical black eyes to the enemies of diversity, he sought to restore dignity and respect to the highest offices in the land.

Remembering Elijah Cummings, the Mayor of Baltimore said, “He was, put simply, a man of God who never forgot his duty to fight for the rights and dignity of the marginalized and often forgotten.” (Washington Post, October 17, 2019)

There’s a hymn in the English Hymnal that I have loved since childhood. Sadly it didn’t make it into the Episcopal Hymnal 1982, but some of you might remember it: Jesus, good above all other, gentle child of gentle mother. As I reflected this week on the persistence of the widow, the determination of Jacob, and the steadfastness of Elijah Cummings, I found the last verse of that hymn spoke to me as a prayer that we might all adopt in these times:

Lord, in all our doings guide us,
Pride and hate shall ne’er divide us.
We’ll go on with thee beside us,
And with joy we’ll persevere.
Percy Dearmer The English Hymnal 1933