Skip to content
Home > News > The Sunday Sermon: Crossing the Sea to Life 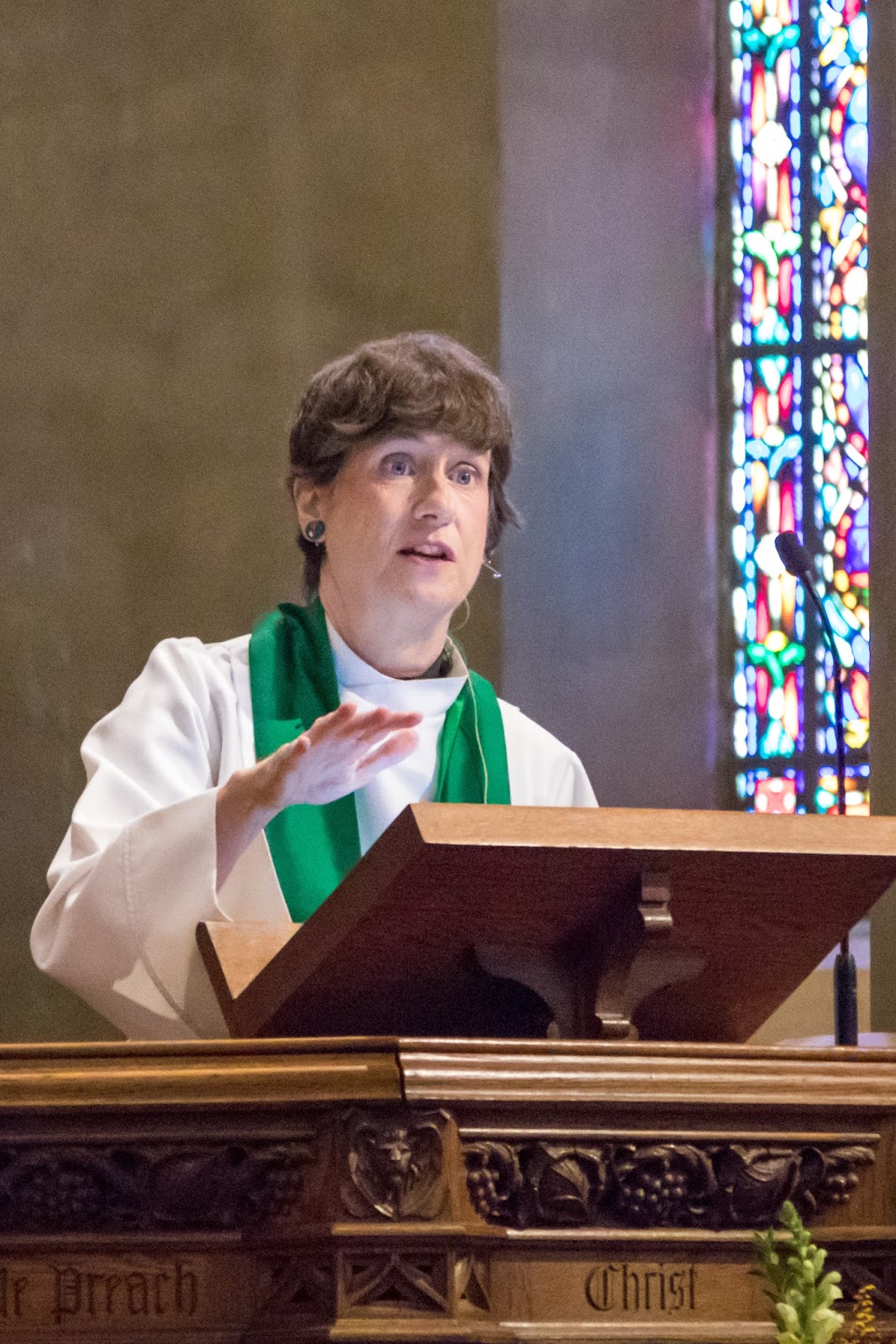 If I were the kind of preacher who used visual aids, I would start this sermon by displaying a picture taken at Bayshore Beach in Tampa, last weekend. It showed the view looking out to sea from the beach. But there was no sea to see. Hurricane Irma, just offshore, had sucked the water away from the coast and exposed the seabed, it looked like for miles.

In the pictures I saw, dozens of people were out there walking around where they would normally be swimming, while the meteorologists were having mild hysterics, urging everyone to retreat to higher ground, because at any time without warning the water would come rushing back to surge onto the beach as the storm shifted position.

Until I saw those pictures, I always thought the story of the Red Sea was a little far-fetched. I had no concept that the wind could actually push the ocean away from the shore like that. I have a new appreciation for the power of nature. And I never cease to be amazed by the bull-headedness of people who disregard the warnings of experts and put their lives at risk. It was as if they had some kind of deathwish, going out there where they had no business to go.

So, Egypt and Israel. Moses leads the people of God through the dry seabed on their pilgrimage from death to life, from slavery to freedom; and the forces of death, the armed forces of Pharaoh, try to pursue them in order to perpetuate that captivity, going where they have no business to go, disregarding the power of Israel’s God. And we witness the truth of the chilling prophecy that Moses offered God’s people as they panicked, trapped between the army and the sea: “The Egyptians whom you see today you shall never see again.” Pharaoh’s army goes looking for death and finds it. In a culture of death, death is the only possible outcome.

The people of God pass through the sea in a kind of baptism, a one-way passage from death to life, from fear to hope, from the chains of Egypt to the unpredictable freedom of the pilgrim’s way. And each one of us gets to tread that way too, each one of us is invited to step forward into the sea, not armor-plated like the Egyptians, not seeking death and destruction, but unarmed and vulnerable, trusting in God to lead us from those places of death to springs of living water.

Exodus gives us the parable of the community’s journey of faith from death to life. Romans and Matthew give us tips on how to behave in that community.

When I first read Paul’s statement that the weak eat only vegetables, I felt relief that our vegan bishop isn’t visiting today. It’s ironic that Paul is telling the people of God not to judge each other but he uses pretty judgmental language himself. Why does he say that vegetarians are weak? The answer lies in the cultural context of his day. In ancient Roman cities, the vast majority of meat was sold only after being sacrificed to the pagan gods, or idols as Paul calls them. And animals were sacrificed all the time: death was all around, with pagan altars on every street corner.

Paul understood the diversity of the church. Some Christians felt secure enough in their faith to be able to eat that meat understanding that the idols were not real gods. Anyone who wasn’t quite convinced was better off avoiding meat altogether, rather than being conflicted by a fear that they were under the influence of whatever false god the meat had been sacrificed to. Paul’s point is that it really doesn’t matter what dietary laws you observe or which holidays you observe: all are to be regarded with equal honor and consideration because all are one in Christ.

To translate to our own context, some of us have given up smoking, some have cars that don’t use fossil fuels, some give away more than a tenth of their income. Some churches celebrate Communion every Sunday while others don’t. Some churches use incense, while others don’t. None of these habits entitle anyone to self-righteousness or to look down on any other member of the community, because what binds us together – the salvific act of God in Christ – is much, much more important that any lifestyle choices. That’s a foundational principle, both as we cultivate community in this parish, and in our efforts towards Christian unity.

The Gospel story, like the Epistle, could use a little contextual explanation. The parable uses some hyperbolic language to make its point. “Seventy seven” or “seven times seven” is like colloquially saying “ a million”. It just means an infinite number. Similarly, the ten thousand talents owed by the slave is an unimaginably huge amount of wealth: it’s just making the point that this was a really big debt, one that nobody could pay back, whereas 100 denarii is a relatively trivial amount.

Scandalously, several of the details in the parable have contemporary parallels in our own culture. First, the parable is about a king and his slaves. How do we seek forgiveness for the terrible national sin of slavery? How do we seek justice for the multitudes who are still enslaved today through human trafficking, knowing that San Diego is a major center of that appalling industry? And how do we seek forgiveness for our silence and inaction over decades and centuries of slavery and racial oppression? I am proud of my colleagues who have taken action to remove provocative symbols of the American Confederacy from their churches, even when that leadership threatens their personal security or that of the church.

Second, as archaic as it might seem, debtor’s prison is a reality today for our low-income neighbors. People convicted of minor offences are charged fees for public defenders, jail administration, and other aspects of the court system. When they can’t pay what often amounts to thousands of dollars, they are jailed, which means they can’t earn the money to pay the debt, and a vicious cycle ensues. It didn’t make sense in Jesus’ time and it doesn’t make sense now. My brother dean in Seattle tells me that his cathedral offers loans for bail and court fees, and they are always paid back. What if we set up a bail fund – or a security deposit fund – here in San Diego? Could we demonstrate a better way to care for our neighbors caught unjustly in the justice system or sleeping in the streets? Could we offer our oppressed brothers and sisters a path to freedom and newness of life? Perhaps that would feel to them like God pushing back the Red Sea.

In the parable, the king initially demonstrates amazing generosity to his servant. The king doesn’t draw up a repayment schedule; he forgives the entire debt. He wipes the slate clean. That’s not usually how we approach forgiveness. If I forgive you, I expect something from you: an apology, a reparation, a promise to change your ways. But here’s the catch: if I withhold forgiveness until you act, I am being held captive by you, because I have no power to affect your behavior. The only way to be truly free is to offer unconditional forgiveness. And what’s more, when we experience mercy, the parable tells us quite bluntly that we should pay it forward, if we want to live into the abundance of God’s mercy.

Forgiveness brings hard questions. Do I have to forgive the abusive spouse or parent who has left me with lasting scars, physical or emotional? Do I have to forgive the bully or narcissist who inflicted pain on me or someone I love, who continues the bad behavior, and who shows no remorse? We must distinguish between forgiveness and permitting a destructive behavior to continue doing damage to the individual or the community. Forgiveness should be a liberation, not a continuing captivity. And forgiveness may lead to pursuing justice, so that the perpetrator is prevented from injuring others.

What’s an appropriate amount of forgiveness? We live in a transactional society with simplistic rules. You scratch my back, I scratch yours. Fairness is important. You should pay your debts. If you don’t pay your debts there should be consequences. We are astonished when someone extends forgiveness beyond what we think is reasonable. We want to parse it out: this much forgiveness for that much repentance. That’s the core of Peter’s question to Jesus. How much must I forgive? It suggests a deep need for a transactional approach, and I think most of us can relate; I know I can. Why do we need this measurement? What hunger does it satisfy, or what fear does it assuage? Is it because, if we can figure out how forgiveness is meted out, we imagine that we can do just enough of what is right to earn the necessary amount for salvation?

Is that how we want to live, constantly keeping score, meting out morsels of forgiveness to earn spiritual credit? Or do we want true freedom, born of the certainty that God’s love knows no limits and isn’t for sale?

Today we celebrate homecoming. It’s a day to rededicate ourselves to this community, to renew relationships, to remember who we are and whose we are. Today we have the opportunity to make new commitments, to give of ourselves in ministry. After this service we are offering a special meal, and I hope you will spend some extra time enjoying the food, nurturing friendships, and learning about the many ministries of the cathedral. Today is a good day to plunge into our community as the Israelites once plunged into the seabed, journeying to a life free of fear, knowing that we are in the hand of God, who is the God of life, of compassion and of infinite love.