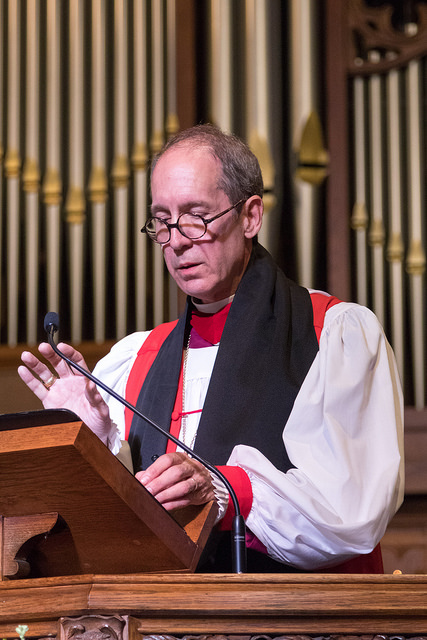 Come Holy Spirit: Touch our minds and think with them, touch our lips and speak with them and touch our hearts and set them on fire with love for you. AMEN.

This is always quite a day. A bit of a parade, Banners, bag pipes, choirs, anthems, and such. I have so often encouraged folks who are not a part of the Episcopal Church to come to this service because of the pageantry, the fun and the beauty. I mean: how many times to you get to experience a slain bread dragon as a part of a church procession and then eat it at the reception following?

On this side of the pond, our commemoration of the patron of England and our rejoicing in all things Anglican is a celebration of what we see as good and hallowed in our heritage. A brief survey of the centuries would surely touch on Augustine of Canterbury, Julian of Norwich, and George Herbert. We would note the importance of the Magna Carta and common law. And we would certainly give thanks for common prayer and the Anglican worship and music that imbue this very service.

As a relatively new nation, with a great deal of pride in our own history, we anglophiles readily associate with British history, culture and custom. After all, which one of us would not die to live at Downtown Abbey? We take the Facebook quiz wondering which character we are most like! And now, even as we grieve the last season—what will we do without Cora’s rapier repartee, we now are saved by the first season of The Crown and Victoria. And so we do well to remember this day our shared English heritage and how it has blessed and given to our church and our culture. We are proud of our Anglican identity and association; we are proud of our heritage as citizen of these United States. Whether we are English, Welsh, Scottish, or United States citizens, it is good to love one’s country.

And yet, even as we rejoice in national heritage and identity on this day, there are troubling signs around the planet of a strident resurgence of nationalism which divides rather than unities. There are forces that are drawing factions and creating a withdrawal from common interests. In an age when so many challenges are global, we need to be very careful with national pride and ambition. Today, we celebrate our Anglican heritage. But we need to be careful that this does not weave into some of the darker chapters of both US and British history where this pride bleeds into a not so subtle sense of superiority of race which was at the heart of British Colonial oppression and at the core of US slavery, imperialism and Jim Crow. Throughout our shared history, we have much to celebrate, but we also have much to mourn. We need to be careful.

A quintessential part of being Anglican and Episcopalian is to love our country so much that we call each other and our leaders to our highest ideals. Think of William Wilberforce fighting the slave trade, Bishop George Bell’s speech on the floor of the House of Lords criticizing the bombing of German cities in World War II, Presiding Bishop John Hines marching with Martin Luther King, Jr. in Selma. Think of our church standing up for LGBTQ rights at tremendous cost. Think of us standing up for neighbors who are fearful because of their immigration status. At the core of our heritage stands one who is not English, one who is not documented—a refugee and ultimately a convicted criminal—Jesus of Nazareth. We stand with him and all he teaches us—all he calls us to be.

We stand with him just as a saint of another age did. We remember St. George, not because he slayed a dragon, but because he stood up with Jesus and claimed his faith in face of brutal persecution. He was absolutely clear about his singular allegiance to Jesus as Lord. And so he was martyred in the Diocletian persecution. He was a man who could be described as a lover of country with loyalty to the emperor serving as soldier and tribune. But when Diocletian tried to purge the army of Christians through arrest and execution, George stood up for his faith and his Lord Jesus.

Where do we stand? Where are our allegiances? Parades and banners, political parties and pageantry are seductive. We can get caught up in passions of power and be overwhelmed with fear and suspicion of the other. Or we can say centered in Jesus and connected to the whole human family.

Today, we celebrate who we are as Anglicans. We love what we should love about this heritage. But let us rejoice and give thanks for the Asian, the Mexican, and the First Nations of this land. Let us rejoice in who we are but confess our own sins of pride and hubris. Let us stand with Jesus who calls us to love our neighbor.

Last summer, both major presidential candidates endorsed American exceptionalism, the belief that this nation has a special responsibility to the world. The new president in his inauguration echoed and amplified this notion with the phrase, “America First.” This is not a new idea but one that has warped both British and American core values of human dignity for generations. Rome First didn’t work, England First didn’t work, Britain First didn’t work, and America First will not work. As St. George demonstrated and witnessed with his life, for us it must be Jesus First! The Jesus Movement is a movement of love that does not divide but unites. It is selfless and giving. It is about hope not fear; love not hate.

On this day, we will sing two national anthems. We will remember the queen and a star spangled banner. Some of us may note that those rockets’ red glare were fired by the Royal Navy just weeks after burning the Capitol and White House. Don’t worry: all is forgiven!

It is good to love our country. After all, we pray for the queen, the president, and all in authority, even as we call them to goodness and generosity. God bless the queen; God bless the United States. And yet we then remember St. George and close with the immortal hymn, Jerusalem. William Blake’s anthem which has been appropriated as the veritable hymn of England is not satisfied with the way things are but rather calls us to a higher place, the image of New Jerusalem where creation will be made new.

And so, let us strive for that common place which brings together all the nations and peoples of this world into one. Let us seek a kindred understanding and heart that love our distinctive character as English, as African, as Native American, as Mexican as….whatever…and calls us to being neighbor, brother and sisters, the family of God. For St. George, for us and for all the saints, it is Jesus First.