Skip to content
Home > News > The Maundy Thursday Sermon: A Call to Service


Imagine, for a moment, that the Queen of England has decided to pay you a visit in your home. And imagine just for a second that the first thing she does when she arrives there is to pick up a broom and start sweeping your floor.

Whatever your reaction, I suppose it might have been something like the response of the disciples in the gospel reading this night when much to their surprise, Jesus took off his outer garments and got down on the floor to start washing their feet. Washing feet was the job of a slave, not a master. Jesus is quick to remind them to live in service and not as a master after Peter objects.

And the church has tried to take that seriously, hasn’t it? The call for Christian service has been loud throughout the ages. I’d like to borrow from the work of biblical scholar Sandra Schneiders to unpack that service a little bit. She identifies three different kinds of service I find insightful.

First, there is service as obligation. The roots of the word service come from this first use of the word stemming from the word slave or servant. A servant is obligated to serve the master. Of course that word has changed in meaning through the ages. Most of us today do not, I hope, have servants who are obligated to serve us. But I’m probably not the only one who can get a little impatient when the service in a restaurant isn’t up to snuff. Or who is with me in dreading the experience of service when having to call the cable company? We expect those who are providing service to give it when we are in the power position. In those cases, I all too often end up assuming the worst about the one doing the serving. “They must be incompetent,” I rationalize. Or purposely messing up to irritate me! Or lazy. Or– my personal favorite go-to judgement– “they are so inefficient.” The thing is, I can stay at home and serve myself my own water. I do not have to have cable entertainment. In this first kind of service as obligation, the server, though, is bound up in a larger system that he or she has little ability to change, while the one being served has a fair degree of ability to change how they are being served.

Next, Schneiders describes service as a sort of existential privilege instead of obligation. A teacher, for example, serves his students. A priest serves her congregation. A doctor serves her patients. The mainline Church has long leveraged this kind of service as a good thing in its mostly privileged congregations. In this model of service, the server has a high degree of ability to effect change on the situation, but the one being served doesn’t have much leverage.

Since the mid-20th century we’ve explored the impact on those being served by those in power and learned it isn’t always so beneficial to receive service from the privileged. It’s really easy for the privileged person to project needs onto those being helped in ways that may or may not be helpful to the one receiving the service. Take the old model of missionary work, for instance. The early Spanish missionaries showed the native Americans how they “needed” to be clothed for modesty and “served” them by giving them European clothing, as well as imposing other European values and norms including forcing them into Christianity. We look back now and realize that the interference by the Spanish was inappropriate, that the ministry of the church has to ask the served “what do you need?” instead of saying “here is what I think you need” even and especially when we think those being served might make decisions very different from what we want for them. So service of this kind can be beneficial, like most professor/student relationships, for example, but the relationships have to be approached with care so we don’t end up attaching unintended strings or our own need to be needed to our service when we serve from a position of privilege. 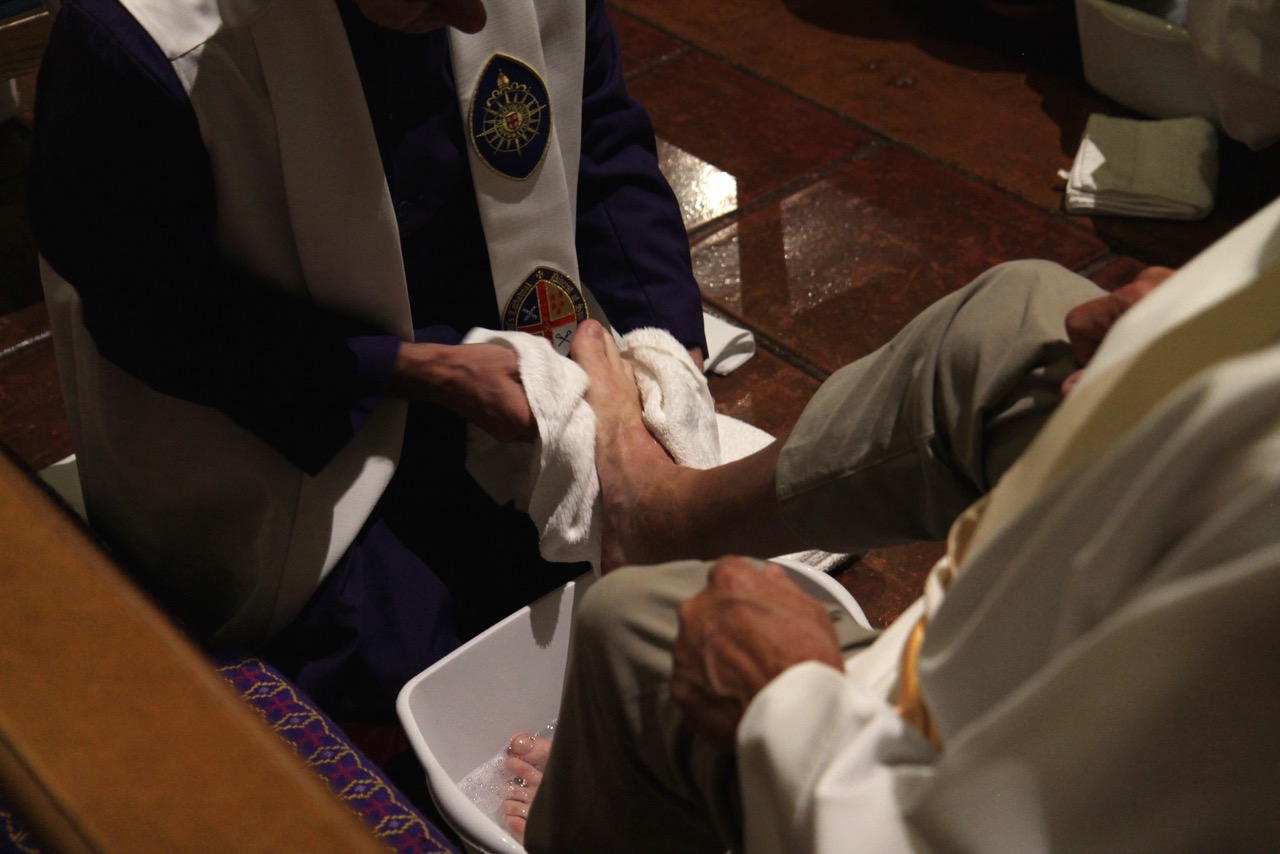 But Jesus transitions at the foot-washing to service in the fourth gospel neither as obligation nor as privilege, but as friendship. Friendship removes the dominating nature of the first obligatory model, where the servers have no power in the relationship. If you are friends with your servant it is hard to ignore their lack of power over their surroundings. Friendship also equalizes the privilege of the second model where the servers impose their will on the served- even if unconsciously– because friendship listens closely to the needs of the other instead of telling the other what is best for him or her. Friendship can begin in the most unlikely of places with anybody- across differences of money, class, station, vocation, ideology, race, sexual orientation, nationality, gender, religion, even politics.

And that is the whole point of the foot-washing narrative in the fourth gospel. Jesus moves from the disciples’ expectation of Jesus as master towards Jesus as friend. He sets the table for a mutual ministry of both server and served, breaking down all sorts of barriers. In just a few chapters Jesus will say, “I do not call you servants any longer, because the servant does not know what the master is doing; but I have called you friends, because I have made known to you everything that I have heard from my Father.”

But instead we have this God come as man, Jesus, who initiates real, mutual relationship, who wants to know and be known, in friendship, in intimacy, in love, in real give and take, in the dirty muck of dust and grime and grit of water that is made messy from washing the travelling dirt from each other’s feet. Dirt that comes from walking afar and made holy from being washed clean by friends who are willing to hear the stories of our travels in life. We have a God who also wants to know those stories because it is what makes us who we are. Whether God already knows the stories is irrelevant: it is the act of sharing, of washing, that creates the relationship of mutuality, and that is the God we have, the God in Christ who wants that intimacy, that connection– even if it means he has to risk himself, to die, to know us that well. We have a God who calls us to love each other in the same way. We have a God who calls us to be in real mutual relationship with each other, whether rich or poor, whether living in Balboa Park or in Coronado. Whether providing clothing at Showers of Blessing or taking a shower there to get clean. Even no matter which presidential candidate we support, friendship in mutuality is possible because of the love sustained by this amazing God made man in Christ.

We will all at times deny those friendships and community like Peter. We will all betray them sometime, like Judas. We forget what it means to live as friends, as community, as intimate children of God. We forget that the church community isn’t about what business decisions the community makes, or getting it done the “right” way, or any of that, but about this fellowship of mutual friendship and love in Christ, and how we live together. We all forget that love is the whole point. “I give you a new commandment, that you love one another.”

And because we forget, Jesus instituted for us on this night a holy meal, this meal where we come to the table to remember. To tell each other the story over and over again, and to be swept up into that relationship again, and to be carried into this miracle of the God who will never leave us- even when we leave him, even when we might shout “crucify,” even when the night turns dark, that we can remember the light that shines to show that love will not fail. We are offered a place at this table to come, and remember, and find love again, in friendship, and peace, by the love that will never end.

So come. Whether you identify with Judas, or Peter, or Mary Magdalene, or none of them. Come and wash the dirt from your journey among this your community of friendship and love. Then come and eat and remember. Remember from a place of the deep memory, in deep time: Christ made you for love. The days to come will challenge that. But for now we watch and wait, knowing that the love given for us will never die even when our own falters.