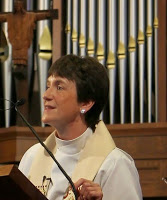 If you weren’t paying close attention, you might have missed it. It didn’t get coverage on the nightly news, and we didn’t even have a special service for it. But this week the Church celebrated a milestone in the Gospel story, the Ascension of Jesus. It’s the missing link in the story of how the church transitioned from a small group of scared people having surprise encounters with the risen Christ, to being a Spirit-filled band of fearless witnesses, ready to share the good news even if they lost their lives for it. Luke ends his Gospel with the Ascension and begins the sequel, Acts, with a reprise of the event. Jesus tried to prepare his disciples for the time when he would no longer be with them. The long speech and prayer in John’s Gospel from the night before he died is all about that preparation. We have a piece of it as our Gospel reading today. But it didn’t sink in for the disciples until he had actually gone.

It was Peter who demonstrated leadership, who was the first to realize that it was all up to them now. He called for an election to replace Judas, so that the inner circle would maintain that mystical number of 12, the 12 tribes of Israel now represented by the new Israel, the chosen people of the new covenant. And they chose Matthias. Once again there were twelve, chosen to lead the way, to show what it meant to be a disciple without Jesus there to teach them.

A disciple’s job is to witness to the power of Christ in our world. That was Matthias’s job. We don’t know if he actually did that, because we never hear another word in scripture about Matthias. But that’s the job. To witness. To live out in our lives what we profess by our faith. To love one another as Jesus has loved us. To love, even we aren’t loved back. To love, even when those to whom we are showing love don’t seem to deserve it or appreciate it. To love, because the world is full of fear, and perfect love casts out fear.

Before Jesus left the disciples, he prayed for God to bless and protect his friends, who were about to become founders of the church. He knew that they would face hostility and persecution for living out the radical love and hospitality that he had taught them. He prayed for the Holy Spirit to be bestowed upon them, the Spirit that breathes life into the dead, that stirs up the world and brings new kinds of creation into being. Jesus planned for change and continuing revelation and the future opening of doors. And he anticipated the fear and resistance that would come from those who tried to hold the doors shut.

But I can tell you from personal experience, when God wants a door opened, you can fight as hard as you like but that door will eventually creak open and the Holy Spirit will blow new life, new possibilities, new creation into the world. You can fight it, you can resist, but in the end the faithful response is to say, “Speak Lord, for your Servant is listening”; to say, “Here I am, send me”; to say, “grant us strength and courage to love and serve you with gladness and singleness of heart.” To say those things, and then to go out and do God’s work in the world that God loves.

For the past century and a half or more the Anglican Communion, our umbrella organization, has been engaged in a campaign to push back the boundaries of love, compassion, and inclusion.
In the mid 19th century the Oxford Movement took liturgical worship and gothic architecture into the slums, serving the poorest in the cities and giving them a glimpse of glory through the beauty of holiness.
Anglican churches in former colonies became independent and indigenous, providing a unique witness to the liturgical tradition within communities in remote parts and taking on local flavor as indigenous leadership developed. The church’s organic connection to the communities it serves allows Anglicans today to offer a unique ministry of reconciliation in divided communities like Northern Ireland, South Africa, and the Middle East.

In the Episcopal Church over the last century the upper levels of leadership and full access to the sacraments gradually opened to minorities, to women, and to LGBT individuals.

As the giant institutional doors barring access have been pushed open, inch by inch, there has been resistance at every move. The Episcopal church split right down the middle during the Civil War. People left the Episcopal church in droves at the end of of the 19th century over the use of candles, vestments, and incense. There was agonized conflict over the civil rights movement mid 20th century, and MLK’s letter from Birmingham Jail was directed in part at Episcopal clergy. More departed over the prayer book reforms of the 1970’s and the ordination of women. Many of us are still hurting from the bitter fights of the past decade. And yet, the church continues its march forward, pushing those doors open one by one.

In our Stephen Ministry training last week, we reflected on the fact that a question starting with why often sets up an immediate confrontation. Why did you say that? Why didn’t you come to my birthday party? And so on. I am not going to take the bait implied in the Why does it matter questions, which to me have a flavor of when did you stop beating your wife? We have other questions to consider as we discern how best to serve God in the world.

The implication of the Arizona campaign seems to be that progressive Christians aren’t Christians at all, because we allow the questioning of some points of traditonal Christian doctrine. This is the same slime that was thrown when some Episcopalians in Virginia decided that they were no longer Episcopalians, back in 2006. In one church in my region, the majority of the congregation left, along with the clergy, but an independently operated Christian preschool continued to use the facility. When a colleague arrived to serve as priest in charge and to rebuild the Episcopal congregation, the teachers told her that they were nervous about continuing the lease arrangement, because the departing rector had said that those who continued to call themselves Episcopalians were not Christian, did not believe in the resurrection, and did not worship Jesus. This was nonsense, of course, as my friend patiently explained, and the preschool staff subsequently developed an excellent relationship with the new incumbent.

As for the campaign in Arizona, it may provide some wonderful evangelism for progressive Christianity, as the congregations of the fundamentalist churches come to realize that there is a way of being Christian that allows you to be both a faithful disciple and a questioner, a doubter, a thinker outside the box. In fact, yesterday the Methodist pastor reported that people all over the world have contacted him to offer support and in some cases to say they will be at his church today in solidarity, including Jews, Muslims, Mormons, and members of the local LGBT community.

Some Christians paint the United States as a world that hates faithful people. This seems to give them license for unreasonable and harmful behavior. The idea that we must allow people to be bigoted and exclusionary out of respect for their religion is unacceptable We should rather hold these people accountable to the deepest values of the faith they preach. Is it loving to draft a kill the gays bill? Is it loving to blame people for being poor? Is it loving to deny committed couples the comfort of each other’s company in hospital or the spiritual discipline of marriage? The Jesus I know didn’t show his love like that.

The people who blame disasters on the acceptance of our LGBT neighbors or on the inclusion of women in leadership, the people who bring bills to the legislature to deny the full rights of citizenship to minority groups, the people who try to deny the sacraments to an innocent child because of perceived sin on the part of his parents: these people deserve our compassion because they are very afraid, and it is fear that drives their violent behavior, fear that the world they have constructed, a world that privileges them at the expense of others, is a house of cards and is in the process of being blown apart. We should be compassionate.

But we must also be wary, because people who act out of fear can be dangerous. We are to love as Christ loved us. Christ loved us by taking actions that changed the world. He loved us by setting expectations of our behavior. He loved us by healing and feeding and raising up. And that’s how we are to love each other. That means we are to stand up for the people who are shut out or threatened. That means speaking truth to power and placing ourselves between the vulnerable and those who would harm them. That means marching in the Pride parade, protesting unjust laws, using our own abundant resources to lift up those with nothing, insisting on all human beings being treated with dignity, adopting a lifestyle individually, locally, and nationally that isn’t built on the backs of the working poor or destroying the earth’s natural environment. That’s how Christ taught us to love.

Before he left them, Jesus prepared his disciples to be the church. He promised them the gift of the Holy Spirit, and next Sunday we will celebrate that gift in the feast of Pentecost. It’s up to us now to continue the witnessing work of the first Christians, but we don’t do it alone. We do it in the company of the whole cloud of witnesses who have carried the good news from those first days to our day, and we do it with the help of the Advocate, the Holy Spirit, who blows continually through our world opening doors and turning lives upside down, who continues to show us new ways to love, to serve, and to witness.

1 thought on “The Sunday Sermon: Witnesses to Life”