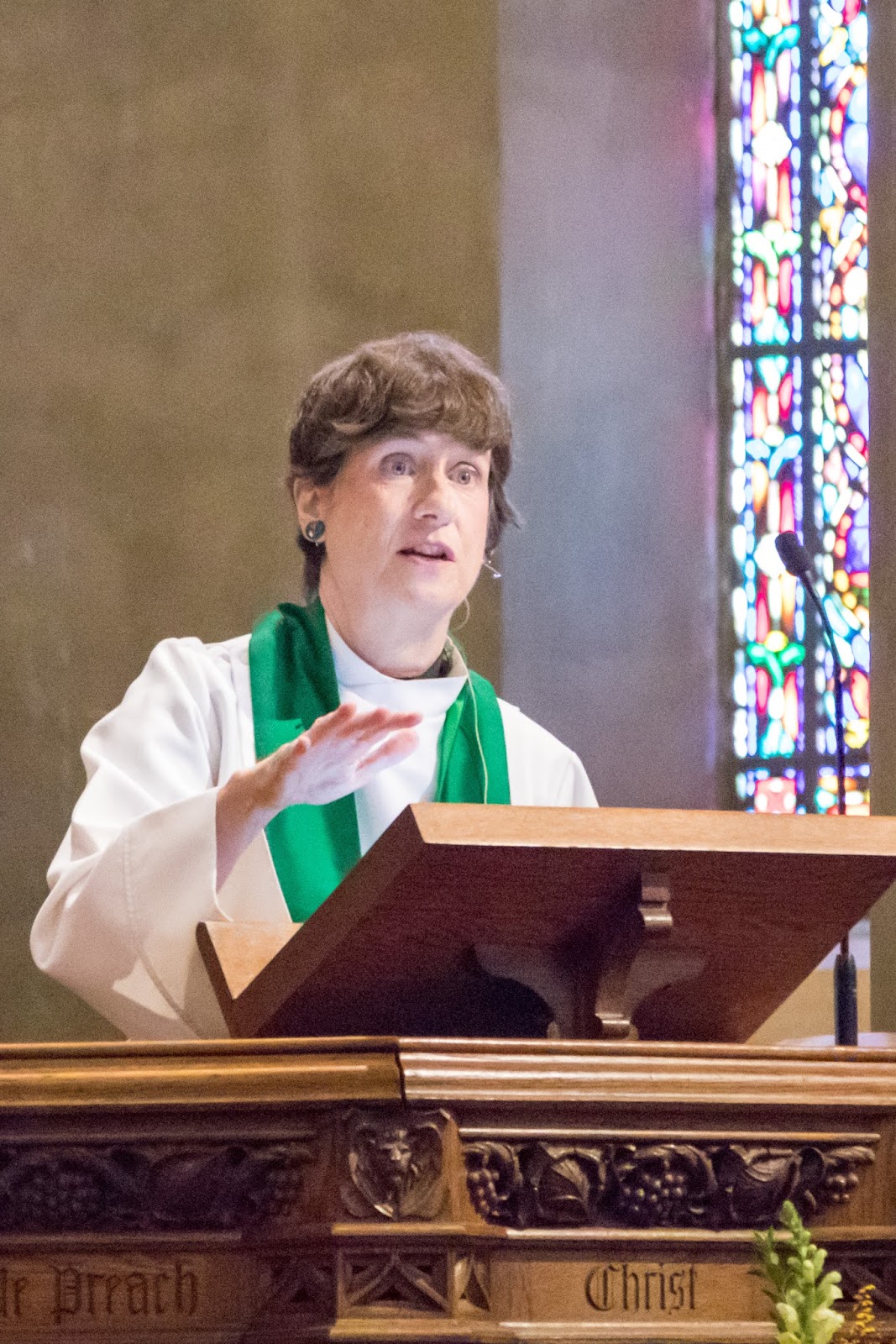 This Epiphany season we are hearing a lot about being called by God. Today, we have stepped out of the regular cycle of readings to celebrate Cathedral Day, which we do here by observing the feast of the Conversion of St. Paul, our patron, transferred from last Thursday. The Gospel reading appointed for the day is pretty grim: it´s not a passage we would want to use as an evangelism tool. Who would want to be part of a community that promises floggings, interrogations, and betrayals?

But it does reflect the end of Paul´s ministry, and that´s the point of these readings: we are led through his story, starting with his own account of his conversion as he stood before kings and governors, continuing with some of the backstory of his missionary travels, and culminating in Jesus´ promise that those who are faithful, who endure to the end, as Paul did, will receive their reward. So our theme of call actually continues today with the story of Paul´s own call.

There is a lot of violence in Paul´s story and you can see some of it in our windows that illustrate the key episodes, starting with his witnessing of Christians being stoned over here on the south side and ending with his execution by the sword over there on the north. The best-known soundbites of Paul´s career also confront us with violent images: the motto Spiritus Gladius, or the Sword of the Spirit, and the bold proclamation that is posted in part over my stall: We Preach Christ Crucified.

Ours is an uncomfortable faith. We live with the reality that our God came to earth as a member of an oppressed and occupied nation, who spent part of his childhood as a refugee, who lived as a homeless person and without any material security, was arrested, tortured and judicially murdered in the most horrific manner imaginable. We acknowledge this reality every time we celebrate the Eucharist and every time we recite the ancient Creeds. We preach Christ crucified, not Christ healer or savior or teacher, but the one anointed by God to suffer for us.

We live with the painful truth that humankind failed to recognize God incarnate; that those in power dealt with the threat of change by destroying the bringer of change rather than being willing to change themselves; and that even those who claim the faith of Jesus have historically and still today fail to see Christ in their neighbors and actively discriminate against the very populations to which Jesus belonged: the poor, the oppressed minorities, immigrants and refugees, the homeless, and those who advocate for radical change.

We are named for Paul, once called Saul, a proud member of a dominant class who reacted violently to the threat that the Jesus people posed to his rigid, rule-bound, narrow-minded tradition. We hear in his own words how he hunted down disciples without mercy. The language is extreme: he was furiously enraged, he was violently persecuting the church, he was extra-observant, extra-zealous for the law of Moses as the Pharisees had codified it.

We have to wonder why he was so dead set on destroying the new communities. What made him so angry? I am reminded of the evangelical preachers who rant about family values and Biblical morality, until they are almost invariably caught out and exposed as adulterers or pedophiles. I wonder if something deep within Paul was fighting the powerful call of the risen Christ to allow himself to love and be loved without measure, until that moment on the road to Damascus when he could no longer hold out, the dam burst, and he found himself helpless, temporarily blinded, and emotionally wrecked by the encounter with Jesus.

We are named for this man, and we can learn from his story. Paul had to make a radical change of direction in order to remain faithful to the God he served. He had to accept that there was a new way of faithfulness, even though it was very different to the way he had followed and defended his whole life.

Despite his self-proclaimed superiority – a Hebrew of Hebrews, a Pharisee of Pharisees, spotlessly kosher, highly educated – Paul´s encounter with the risen Christ led him to confess his shame in public and to declare that in Christ there is no Jew or Greek, no slave or free, no male or female. He was able to make this remarkable 180-degree turn and to recommit his intellect and energy towards promoting the Gospel of unconditional love and compassion. That´s grace. That´s conversion. And that´s what each of us is called to do in our own lives.

If we are serious about following Jesus, we live lives of constant discernment, always listening for where God is calling us next. That applies on institutional levels as well as individual ones.
On cathedral day each year we celebrate our life together and prepare for what lies ahead. As part of our discernment of the future of this cathedral, many of us participated in a congregational vitality survey last year. Many of us also participated in a similar survey at the diocesan level just a few weeks ago. In both cases, the survey results indicated health and vitality. Knowing we are healthy gives us confidence and courage to strike out into the future. But we also know that our institutional health is not sustainable as it stands. As a cathedral we are living beyond our means. Parishioners of earlier generations have blessed us with a modest endowment which yields income to subsidize our pledges, but it´s not enough to fully support the way we have been doing ministry.

We have a choice to make. We can keep going until we are stopped in our tracks by the draining of our endowment or a catastrophe from which we cannot recover. That would likely be as painful and disruptive as Paul´s Damascus Road experience was. Or we can start to change course now, while things seem good, to turn so that we are heading in a direction that will allow us to flourish in the 21st century, in a culture that is increasingly secular, increasingly anti-institutional, increasingly resistant to a membership model of belonging; and so that in due course we can start our second 150 years already on a sustainable path that will allow us to continue to bring the good news of God´s unconditional love to our neighbors, near and far.

On New Year´s Eve we held our traditional labyrinth service. We had a record attendance this year, which made the labyrinth kind of crowded, but it was still a spiritually nourishing experience for me to follow that winding path, twisting and turning in the most frustrating way, but understanding that as long as I placed one foot in front of the other, as long as I paid attention to the route laid out for me, I would eventually find my way to the center and back out again. That´s discernment. That´s what we are called to do as a cathedral named for the man who had the courage to turn his life around, to expand his concept of grace, to face the people he had wronged, and to pursue God´s vision, no matter how risky it felt. The violence of Paul´s story that surrounds us here can be a nudge to find another way, to turn from old, worn-out ways of being God´s people and seek new, life-giving paths.

With the resurrection, God blew open the whole salvation story to the entire world. Paul had to go outside of the walls his tradition had constructed and risk sharing the good news with strangers and people ignorant or hostile to his faith tradition. By God´s grace, Paul turned from a belief that God was the exclusive property of a small, clearly defined group, to a conviction that God is God of the whole world, of all people. That was a huge and difficult leap for him to make, so difficult that the church he founded ultimately adopted an institutional belief that only those within the defined church belonged in the kingdom.

In our own time we are called to turn around again, to push back the boundaries and expand our beliefs about who is acceptable to God, to defeat the notion that God is the God only of those of whom we approve. Following Paul´s example, we will need to let go of our assumptions about membership and insider status in the church and share God´s Spirit, reaching out to all people, especially those who are unchurched or dechurched because of the bad reputation Christianity now holds in public discourse.

We get to take the message of salvation even further than Paul, ever pushing farther out the boundaries of God´s love. And the words of our Psalm will send us forth: ¨May God give us his blessing and may all the ends of the earth stand in awe of him.¨

A quote to think about:
¨ In Paul … we find creative reshaping of a complex symbolic world by a single thinker responding to the multiform needs of a Diaspora community… Paul is paradigmatic for the way a religious experience can re-create a symbolic world.¨ LT Johnson ¨The Writings of the New Testament¨ p. 246 (1986, Fortress)