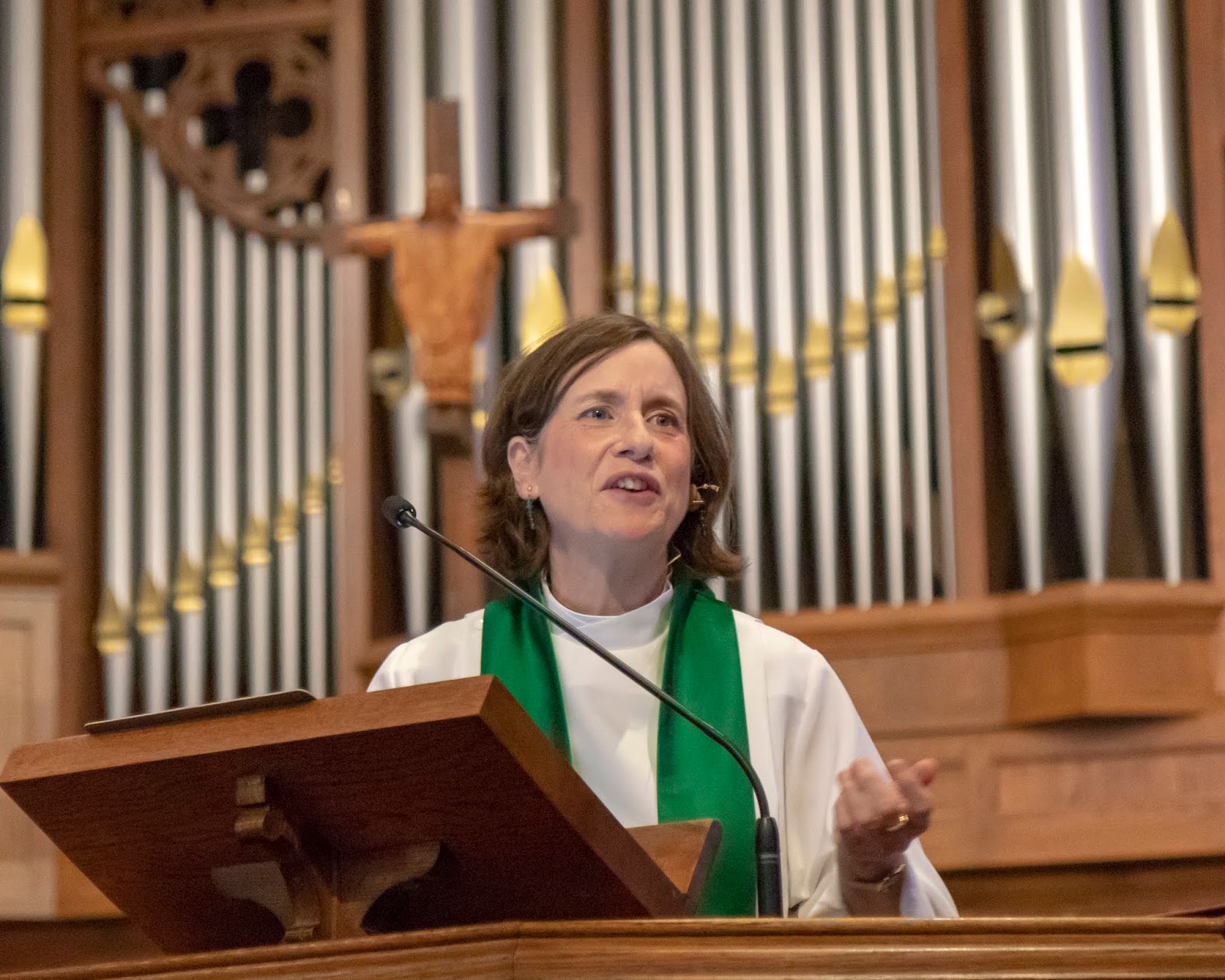 My Acorn TV obsession of the moment is a series called The Clinic. It’s an ensemble medical drama set in Ireland. Over and over again misunderstandings and conflict arise because people don’t spell out what they need or what they mean. They keep missing opportunities for important conversations about relationships, death, and family. Maybe you can think of missed opportunities in your own life. The apology that never happened. The explanation that could have cleared up a decades-long family split. The healing that couldn’t proceed because we had never shared our pain. The trust that was damaged because nobody thought to verify the truth of a rumor.

In our Gospel reading Jesus tells his disciples for the second time that he’s going to be betrayed and killed, and that he will rise again. But they say nothing because they are afraid to have the conversation.

The #MeToo movement and the current accusation against the Supreme Court nominee reminds many of us of the times we didn’t speak up about harassment, abuse, or assault. We are afraid to have the conversation, afraid because we might not like what we learn, afraid of the bottled-up grief and pain that might boil over. I didn’t properly grieve my parents or process their deaths for nearly 20 years, and when I finally started therapy, as a prerequisite for starting the ordination process, I was terrified of what I might find when I opened up that Pandora’s box.

The disciples are afraid to talk about Jesus’s death. I get that. We avoid talking about the things we fear, and we tend to fear death, both our own and that of those we love. So that conversation about end-of-life teatment never happens, and when the inevitable occurs and the loved one is incapacitated or has died, we don’t know what they would have wanted, and our grief is compounded by regret and guilt.

What might we do if we were not afraid? What kind of relationships might we build if we told each other the truth, if we uttered the scary words, if we had the challenging conversations? What kind of world might we create if our society were committed to truthful and open communication, however hard it might be?

Our diocese is in the middle of a bishop selection process. I am on the nominating committee and it has been a profound experience and I am glad that we are nearly done.
Now, you need to know that the Episcopal Church has taken to heart Jesus’s words “whoever wants to be first must be last of all and servant, or literally deacon, of all.” That’s why we ordain people deacon before they become priests – to remind us of our servant status. It is considered bad form for priests to openly aspire to becoming a bishop. There is no mechanism for priests to publicly discern if they might be called to be a bishop. The whole process of discernment is done in secret, at least until the slate is published, and whoever is ultimately elected must then learn how to be a bishop on the job with virtually no preparation. I’m not sure that this is the best way to develop leadership. But at last summer’s General Convention the bishops discussed a proposal to create a discernment and development path for potential bishops, and they shot it down. So we continue to be afraid of voicing a call to leadership. How might the governance of our church be different if we weren’t afraid?

We all know how broken our civil leadership process is. Election season is upon us. The signs are going up. The ads are starting: negative, nasty in tone, casting the opponent in the worst possible light, using out of context quotes or sheer falsehood to blacken the other guy’s reputation while puffing oneself up. Candidates have even withdrawn from consideration because of death threats or racist, sexist, or homophobic harassment.

I find it admirable when a candidate withdraws because media coverage or some complication create a distraction from the process and the overall vision. Putting the community above one’s own ambition is so rare today that when I hear of someone stepping back for personal reasons I find myself skeptically wondering what dirty laundry was about to be displayed. We seem to have a famine of honorable leaders in today’s America. What kind of nation might we be if truth and transparency were standard practice?

The way we select our leaders today is far from the way Jesus called his disciples. James, in his letter, warns against what our translation calls selfish ambition, but which could equally be translated factionalism or party spirit. A true call to leadership, to greatness, includes a commitment to care for the whole community, rather than a determination to carry out a personal agenda regardless of its effect on those governed. Jesus was called to teach the way of love and compassion according to God’s dream for creation, not to revolutionize the government or support a political faction; that was what Barabbas was about.

The Biblical model consistently portrays greatness as something that happens to unlikely people: David was the youngest brother, sent off to mind the sheep while his elders entertained an important visitor. Mary was a sheltered teenager from a humble family. Simeon was a frail elder who spent his days puttering around the Temple. But each of them was chosen to play a significant part in the story of salvation.

Jesus holds up a little child as an icon of greatness: how unlikely is that? Children are the most fragile, the most vulnerable among us. They don’t spend money or vote, so they are ignored by those who hold both commercial and political power – except when they can be used as leverage to influence the adults who care about them. So children who cross the border are taken from their adult caregivers and locked up as a deterrent to other would-be immigrants. The insurance industry uses children to sell life insurance to their parents. Politicians running for office pose for pictures with babies to show their humanity.

And children have been victims of too many abuses: the Irish children born in church-run orphanages and Magdalene laundries, neglected, abused, and, when they died, dumped in septic tanks. The children trafficked for sex and slave labor. The children we heard about last week on Vida Joven day. Children in foster care – a friend with first-hand experience of the foster care system told me that statistically, any child who has been in the system for four or more years is almost certain to have been abused. It goes on and on.

Jesus clearly states that the way we treat a child demonstrates our regard for the child’s Creator. Last Sunday I presided at the 10:30 service, and to my great delight two choir members had their tiny boys with them in the choir stalls, snuggled in slings and watching every move I made. It warmed my heart to see them there. And at the 1:00 service we routinely invite the children to come and surround the altar for the Eucharistic prayer. When we welcome children into our sacred spaces we are following Jesus. We are honoring our baptismal promises to respect the dignity of every human being and to seek and serve Christ in all persons.

Who is the greatest in the kingdom of heaven? While the disciples, clueless as usual, are fighting over who gets the corner office, Jesus is looking for the last and the least in the crowd. He isn’t interested in striving for first prize or dramatic gestures. He cares only that we love and serve each other, that we pay attention to the most vulnerable among us, that we do small things with great love, as Mother Teresa once said.

When I entered the discernment process for ordination I went through a period of great anxiety. Would I measure up? Would I be a successful priest? I was so used to striving for excellence, passing the exam, outdoing the competition, that I lost sight of the true nature of my call. But there came a moment in prayer when I realized that God wasn’t calling me to a glittering career.
God wasn’t concerned with success. God was simply calling me to be obedient to the call, to be a faithful priest, to do my best. The relief was enormous.

The Gospels portray the disciples as knuckleheads: bumblers who constantly misunderstood Jesus, who squabbled and complained and didn’t get the message. But in spite of all that, through them, God brought about something amazing. Those same bumblers went on, after the resurrection, to start something that has never stopped: a movement of love, generosity, and liberation that continues today in us. Our Presiding Bishop calls it the Jesus Movement, and today we will welcome two new members into that movement through Holy Baptism. What kind of greatness will we model for them? What value shall we place on truth, compassion, service, and dignity? What kind of world will we build for these children?