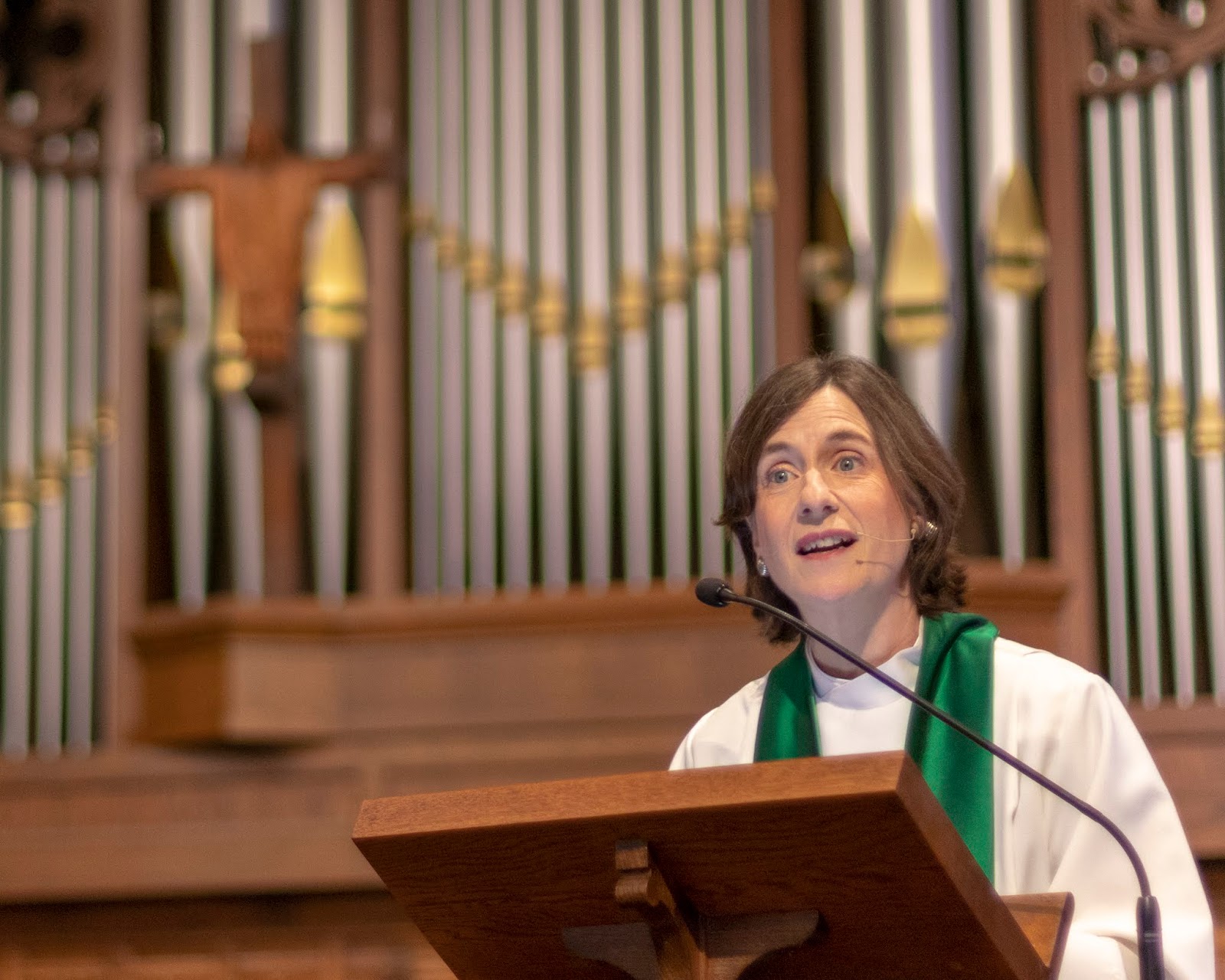 In the summer of 1995, as part of my ordination process, I was required to spend ten weeks working full time as a hospital chaplain. The program included several overnight shifts as the on-call chaplain at Yale New Haven Hospital. At the time my sons were nearly 5 and nearly 8. My husband had a demanding job, and we had to figure out childcare that would include some very early mornings. Eventually we decided to send them to England, to stay with their beloved grandparents for most of the summer.

On the appointed day we drove down to JFK Airport in New York City and took them to the gate (security wasn´t nearly as tight in those days). When it was time to board, a burly male flight attendant appeared and led the two little boys through the door to the ramp. As we watched them disappear I could feel my heart cracking, but I tried to wave cheerfully as they went off quite happily on their adventure. The next morning we called to make sure they had arrived safely, and my younger son commented on the funny face I had made. Letting my children go, even knowing they were going to people I loved and trusted, was the hardest thing I had ever done, and I still get emotional remembering. There is no worse feeling than seeing your child taken into the hands of strangers.

This sermon was going to be about suicide, about how we can´t see beyond the surface of people´s lives and only God knows what is in the heart, about friends I have lost to suicide and about what we might do to shine a light or sow a mustard seed of hope for those who are deep in darkness. But this week´s media coverage of migrant children separated from their parents and imprisoned has overtaken me, and the spectacle of people, entrusted with the care of the vulnerable, claiming Biblical authority for heartless and abusive actions compels me to speak out in condemnation and in defence of our God and our Scripture. I am outraged, and if you aren´t outraged too, we need to talk.

Here´s what the Bible does tell us: ¨When immigrants live in your land with you, you must not cheat them. Any immigrant who lives with you must be treated as if they were one of your citizens. You must love them as yourself.¨ (Leviticus 19) And in the Gospel Jesus says, ¨Just as you did it to one of the least of these, you did it to me.¨ (Matthew 25). And yet we hear our national leaders saying it´s Biblical to take young children from their parents and lock them up, as a deterrent to those who might think to bring their families to the States for a better life. Abuse as deterrent. While there are examples of such behavior in the Bible, they are not held up as role models.

In the Bible stories we´ve been hearing most recently, children are the heroes. Two weeks ago, we heard about the boy Samuel, called by God to reform the religious institution of his day. Today we heard about David, the little shepherd boy, overlooked because he was just a sweet, rosy-cheeked child, but nonetheless chosen and anointed for kingship. These two boys went on to be two of the greatest champions in our story of faith.

Size and maturity are not indicators of value in God´s eyes. The tiny mustard seed can grow into an abundant shrub. The last shall be first. The Lord does not look on appearance or stature but upon the heart. God calls children to important ministry: think of the boy with the five loaves and two fishes, or Nobel laureate Malala Yousafzai. They are not assets to be used or withheld for political gain. Our children are our future, and the way we treat them has longterm consequences for our world.

We have seen the consequences of children being separated from their families before. Those seeds will bear a bitter fruit. I know families who adopted children from orphanages in Eastern Europe, institutions where the children had been rarely held or spoken to. These families face enormous challenges, because the children have great difficulty learning to love and trust anyone. In some cases like this, children grow into violent sociopaths, unable to empathize or form attachments.

Decades ago the US government had a policy of rounding up migrant kids from Central America, putting them on airplanes, and dumping them in their countries of origin without making any provision for their care at the other end. The kids banded together and formed gangs, which grew into murderous organizations such as MS13, and which fomented hatred of the nation that had abandoned them so callously. That´s how terrorists are formed.

Recent research has demonstrated that the brain of a baby who isn´t nurtured and cuddled in the first weeks of life doesn´t develop properly, and the trauma of separation can have a lasting effect on mental health and academic potential. Children are meant to be in loving families.

Today is Fathers´ Day, a day for families to gather. Some of us cannot or choose not to be with our fathers today. Fathers´ Day is a poignant day for me because I lost my father when I was 12, and the father of my children died five years ago. Maybe it´s complicated for you too. Maybe you have a difficult relationship with your father. Maybe he is no longer living. Maybe you have lost touch with him.

On this Fathers´ Day I pray for all those who cannot be with their fathers because they have been separated by powers beyond their control: those whose fathers are in prison; military kids whose fathers are serving their country far away; LGBT kids who have run away from home or have been thrown out because of their identity. And of course those migrant children who are being abused for political purposes.

While there are times when the image of God as Father doesn´t work for me, on this day I hope that all those children are gifted with the conviction that they have a heavenly father who loves them unconditionally, even if their human fathers are absent or inadequate.

So much of our ministry is about sowing seeds. A parishioner recently suggested a ministry of writing encouraging phrases on Post-its and placing them on benches and lampposts around the neighborhood. A single word can land in someone’s heart like the mustard seed landing in good soil. It can change or even save a life. When we do Ashes to Go, when we march in the Pride parade or bless the marathon runners, we don´t know if our actions will make a difference. We sow the seed and leave the rest to God.

But as people who belong to the God of love, who revere the Scripture that tells us to care for the stranger and the vulnerable, to love our neighbor, and to stand up for justice, our ministry must also include speaking truth to power. When we see abuse perpetrated as national policy and our own sacred book mocked, we are to take seriously the words of today´s Collect, asking God for the grace to proclaim the truth with boldness and minister justice with compassion. We are to call our elected representatives and demand change in the name of God. We are to do the hard work of sowing the seeds of change.

And because we are people of faith, people who know who God is, we can be confident that God will take those seeds and grow them into a world where all people will flourish, loved and nurtured in the new creation of God´s triumphant kingdom.