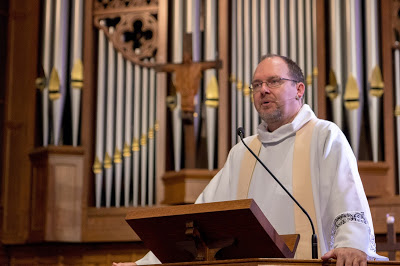 Christ
is risen. “He is risen indeed. Alleluia!”

We
proclaim this bold news each week during the season of Easter. You should know me well enough to know by now that I don’t believe in rote liturgy. I don’t believe in doing things just because we’ve always done them, although I love tradition when it draws
us closer to each other and the source of love and new life. And because of that, I believe that saying “He is risen indeed, Alleluia” must mean something if we are to say it together this season.

For
the disciples in the early church it meant belief in the physical resurrection of Jesus. They thought he would be back any day to pick them up and whisk them away. For those in the middle ages, it meant belief in Jesus so that we ourselves would live after
death. But while the gospels do show that God is doing something new in Jesus, they also connect it to the ongoing work of God over the ages. Resurrection is not just something that happened long ago or something reserved for a distant and uncertain point
in our future. Resurrection happens over and over again. And so when we shout “Alleluia!” during this season, for me it is infused with meaning, and hope, and love, and gratitude. Alleluia means we look for resurrection and new life even now.

The
disciples in the gospel this morning are still reeling from the death of Jesus, the one who they thought was going to redeem Israel, to save them from Caesar, to free them from the occupying presence. They were expecting someone to boot Rome out of their
country, but instead he died on a cross. They had no idea what to do.

And
in our story this morning Mary Magdalene and Mary the mother of Jesus and Joanna and other women have seen that the tomb is now empty and they’ve had this weird experience there, and they were scared and ran to tell the other disciples. The disciples know
only that the one whom they thought was going to confront Rome is dead. So they are holed up in a room. Their hopes are gone, because the one whom they thought was going to save them from an occupying foreign power is dead. They thought the Messiah would
use the power of empire to save them from empire and they had no framework to imagine otherwise.

And
isn’t it so hard to see new life when it is in front of you because now in our text Jesus appears, and they can’t process it. When life the way you’ve known it suddenly changes, it is scary. And they are frightened. They think he is a ghost. And he goes through
a litany of tests to prove he is real flesh and not a ghost; from letting them touch him to eating fish, because a ghost can’t do those things. He slowly and patiently works through their fear until their fear dissipates and they can begin to see what is
standing before them.

And
finally, they realize: new life is here! Alleluia!

Then
and only then can they see: resurrection happens. This savior has won not because he would cast out the empire with the brute force of a new empire, but with a whole new way of life.

In
the resurrection, God is doing what God has done all along and what God is even doing right now: restoring life from death. That is why we are reminded of all those stories at the vigil of Easter: God takes the enslaved people out of Egypt and gives them
new life in the promised land even when the people want to return to pharaoh; God takes the valley of the dry bones and brings new life; God restores the people from Babylon and gives them new life bringing them home into Israel; God takes hearts of stone
and turns them to flesh. Because God is love and God’s story is about life from death and that story is about abundant love in the face of despair and death. That story is about a love that breaks out of our world into a space that creates new possibilities,
breaks free of the limits of the brokenness of oppression and destruction and death and of hatred and of fear.

Resurrection
doesn’t just happen to individual disciples. As the stories of old relate, communities of faith go through death and new life too. Mark Trotter last week talked about the lack of new life in the church and how we sometimes get beat up for not acting like
we actually believe in the things we say we do. It’s easy to throw stones at other corners of the church for that.

What
would a church look like that is continually open to resurrection, that is open always to the voice of God appearing behind locked doors when we retreat in our fear of whatever is happening at the present moment?

So
often the church looks to the past for hopes of restoration of its new life. We have a communion of saints that makes the past important. But resurrection and the promise of new life also means that the past has limits. How shall we be present to the risen
Christ here and now, calling us continually into new life? How do we let go of what was to be present to what is becoming?

We
are in a time where these are truly important questions for every community of faith, and especially for St. Paul’s. For some time now, our attendance has been in decline. While we have been able to make some significant improvements to our facilities thanks
to some individual donors’ generosity, our general operating budget is running at a significant deficit. Our population within the cathedral is significantly out of step with the neighborhood around us. Within a three mile radius, 33% of the population is
Hispanic and half are under 50. At the same time Cathedral membership is almost largely Anglo and almost entirely over 50. That means we have lots of opportunities for growth but may mean that the way we do ministry may not speak to the people who are in our
neighborhood who aren’t here already.

As
Mark mentioned last week, young people aren’t connected to the community of faith in the same way prior generations have been. Increasingly a lot of the rest of the world isn’t either. The Church doesn’t enjoy a privileged claim in society that it once did.
In many ways, the Church today is pushed to the margins the way it was before the Roman empire claimed Christianity.

But
while we may be in decline, we either believe new life is offered, or we don’t. We either stay locked in the room refusing to believe what we see, or we ask some questions and become open to the new life offered in front of us.

That
means the community of faith has decisions to make. What are we here for? We may have once served as social clubs, putting on events for fun and enjoyment without much connection to our Christian story. I hope whatever the future church looks like we will
always have fun doing it, but fun is not enough to hold the community of faith together because we are Easter people, and to get to Easter you have to go through Good Friday, which isn’t much fun. Our 20s and 30s group is growing and organizes around small
group discussion of faith. They have fun. They don’t relate much to our worship. Is there an offering of new life here?

When
the church was a social club we had a large enough following that worship could be a consumer offering- entertainment for those in the pews. But in a world where most people don’t identify as Christian, those that do come to church are looking for something
in particular. How does worship inspire new life? Liturgy means “the work of the people” – so how does worship involve every person in the pews to offer up their gifts and remind each follower of Christ that they are part of something bigger as they offer
themselves to the body, the community?

St.
Paul’s has a jump on new life. We are already in a shift. While it is natural to focus on the numbers at the back of the church during worship, the trend nationally is for worship to become less and less important a part of the life of the community of faith,
especially when it is as formal as ours is.

I
believe we have work to do. But I do think there is new life here already.

So
have eyes to see, church! And reach out, and touch, and feel, the bones and flesh of the body of the Christ around you that offers new life. It is frightening to let go of old life. But I hope this season when we say “The Lord is risen. The Lord is risen
indeed, Alleluia!” I pray that we will mean it, with all our hearts, looking not for old life, but for new. Because new life is abundant, and if we have the courage to trust and enter the new life freely offered, we are given the opportunity to co-create
with God in offering new life and love to the entire world!

3 thoughts on “The Sunday Sermon: New Life is Here!”