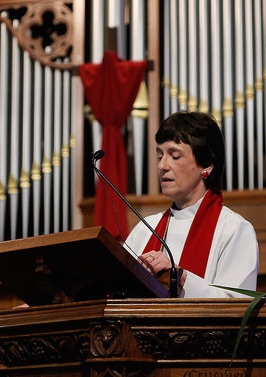 Preached immediately after the Palm Procession around the neighborhood

Well, that was grand! Nothing like a good, loud parade to wake up the neighborhood on a Sunday morning! I imagine more than one neighbor heard the Supersonic Samba dancers and wondered, what on earth is that? And well they might.

Our Palm Sunday celebration offers a wonderful combination of ancient Christian tradition, local color, and joyful celebration. But it is much more than that.

At the most obvious level, today we re-enact a critical moment in Scripture, the arrival of Jesus in Jerusalem for the Passover festival, on a day that turned out to be one of the last days of his life. We wave palms and sing hymns in procession, because that’s what the Gospels tell us the crowd did on that first Palm Sunday, although, if you were paying close attention to the Gospel, you’ll have noticed that Luke doesn’t mention palms in his account; he says people threw their cloaks on the ground to form a kind of red carpet for Jesus.

The palm procession marks the start of a week when we re-tell much of the narrative around the end of Jesus’s life on earth: the footwashing, the institution of the Eucharist, and the Passion itself. By so doing we place ourselves in the company of Jesus and the disciples, experiencing these ancient stories as present realities, reminding ourselves and each other that sacred time is different from ordinary time, because these sacred events continue to exert great power in our lives.

But it’s not just about reconstructing Scripture. We don’t process on Palm Sunday for ourselves alone. This liturgy gives us permission, indeed it compels us, to take our faith out onto the streets.

Whenever we take church outside this building we are witnessing to the fact that there is a group of people in this community who share a faith, who believe that some things are better done together than separately, who are not afraid to be seen in public in the company of a cross.

Our witness stands against much of the surrounding culture.

Think of how politicians play on our fears to divide us, to build walls and shut out those who are different from us.

Think of how the marketplace preys on our insecurities, insisting that only by owning this car or wearing that garment will we measure up to the world’s expectations.

Think of the pressure to conceal vulnerability, to be a winner, to be self-sufficient.

And now think of the people who followed Jesus into Jerusalem on that sunny morning: people who had been shut out because of their demons or handicaps or moral failures; people who didn’t have the resources to look respectable; people who knew their need for the compassionate love of God: victims, losers, the lonely and the lost. These are our neighbors. These are the people with whom we march, in defiance of the world’s illusions of success and strength.

When we witness in the world to the unlikely story of Jesus’ death and resurrection, we reject the world’s expectations and we offer hope to the many who feel like they will never measure up.

Those who walked to the wall yesterday for the bi-national Eucharist witnessed to the sacrilege of building barriers between communities, between peoples, between neighbors. We should be about creating connections, not erecting barricades. Yesterday’s actions protested the bigotry and heartlessness of those who call for such division.

And now we turn to the other business of the day, making the wrenching shift from palms to passion, from the exuberance of Hosanna to the horror of crucifixion. It’s a shocking transformation.

The journey that we will undertake this week offers another kind of witness to the world.

As we meditate on the suffering of Jesus in the Passion story we catch a glimpse of the suffering of God’s children all over the globe: the starving multitudes in South Sudan; the Palestinians cut off from services and medical resources on the West Bank; the Syrian refugees drowning in the Mediterranean; the abandoned children on the streets of Tijuana; the homeless veterans tormented by PTSD in their Balboa Park encampments. We see the suffering of the world and we are moved to do something about it.

When we participate in Thursday’s footwashing ceremonies, here, or at the diocesan center, or at City Hall, we fulfill our promise to serve others and to respect the dignity of every human being. On holy Saturday, when we listen in the dark to the great stories of our salvation history at the Easter Vigil, we will recall how God acts repeatedly throughout human history to bring us back from the wilderness of our own obstinacy and pride, and we will reaffirm the covenant that binds us together into one body, for better or worse.

Luke tells us that the crowds took off their cloaks and laid them on the ground for Jesus. In contrast to the soldiers, who wore their cloaks as a part of the uniform of violent oppression, those who followed Jesus were willing to expose themselves to the April chill of Jerusalem for the sake of honoring the one who came in the name of the Lord. What do you wrap around yourself that you need to discard today? What protective mechanisms might each of us sacrifice in the name of Jesus? As we move now from the excitement of the triumphal entry to the darkness of betrayal, arrest, and death, can we remove the protective cloaks from around our hearts and offer them to our Lord?

Today we shout “Hosanna”, and we also shout “Crucify him.” We come face to face with our own fickleness, our capacity for cruelty and injustice, that we see amply demonstrated in the world around us; but we also see the possibility of another way, a way of vulnerability and peace, a way that can change the world. Today God invites us to continue the march of the Jesus movement on the centers of power and corruption in our world, to stand united in love against those who would divide us with hateful rhetoric, to stay with Jesus all the way to the Cross in the confidence that he has already won the victory. Blessed is the one who comes in the name of the Lord. Hosanna in the highest.