Skip to content
Home > News > The Sunday Sermon: Looking for the Lost 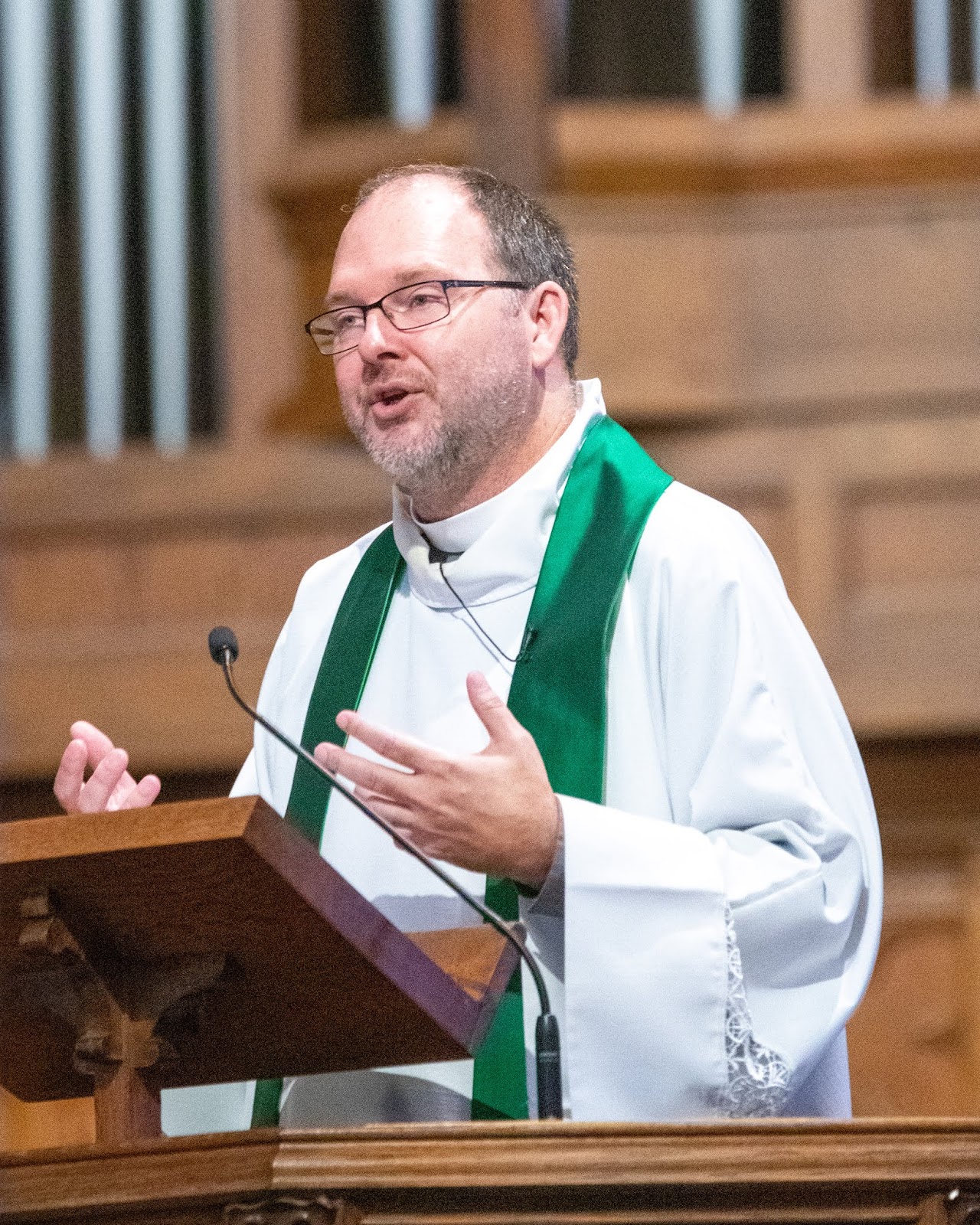 Now
I know that we all like to think we are enlightened and I hope we all want to identify with the lost. Nobody wants to be a Pharisee. But I think at some level, we are here, and I wonder what it is like to put ourselves in the place of the religious insiders
just to see where that leads us.

At
some point no matter what our motivation, we get inculturated in institutional religion and we forget the countercultural basis of this Jesus movement that we area part of.

We
are surrounded by hundreds of years of art depicting Jesus as a blond haired blue eyed insider. He was not.

We
sit every week— not just St. Paul’s but Western Christianity in general— in churches largely surrounded by people who are like us. Like the Pharisees, we are largely insulated in our religious practices from those who are different from us as we follow Jesus.

As
a result, it becomes hard to see who is NOT present. Who is not here with us today? How can you see people who are not present?

But
the answer to that is the key to the text. Who is lost? Who should be sought with the affection of the shepherd in our gospel going after the lost sheep, or with the focus of the woman looking for the valuable coin?

And
that’s what makes it even harder in this story, even more radical from the Pharisees perspective— or let’s say from our perspective— to hear about Jesus hanging out with these people that we haven’t previously imagined existing.

What
if, for example, we learned Jesus was hanging out with our political enemies. Or people we just don’t like. We love to make the lost into people with physical needs like the unsheltered, or the poor; or those historically turned out by the church like the
LGBTQ and women. I think we here are pretty good at seeing those people, and good at imagining Jesus loving them. Who is it we are not good at imagining Jesus hanging out with?

Jesus
didn’t hang with the lost to reinforce their lifestyle. Believe it or not, he doesn’t necessarily hang out with us to reinforce ours either- that’s not the way he loves. He didn’t say to tax collectors, “hey, I love what you’re doing with that defrauding
people thing.” It was his relationship with them that encouraged repentance. Repentance is a word that means “to change direction.” It has gotten laden with guilt, shame, and having low self-worth— but that isn’t what it means in the text. Repentance simply
means acknowledging you need to go in a different direction.

So,
who is not here that may need to go in a different direction?

That
can sound like hard news to us. It sometimes is preached as bad news— preached as, “you need to go out and find those people who make you afraid, or scared, or angry.”

I
don’t think that is what this text is about at all. And I can’t imagine anything more harmful to the gospel than trying to force people to interact with others who make them afraid, scared, or angry. Interactions with those that scare me or make me angry
can be transformative to me, but only if I enter them voluntarily. If I am forced, those interactions may be destructive to both parties. Part of my lack of control in those relationships with another I enter voluntarily, though, with those that frighten
me or make me angry, may challenge me to release my privilege, to let go of having all the answers and being powerful— and that can be what makes those relationships transformative. But that’s another sermon.

Our
position as a progressive tradition makes it even harder to see the outsiders. We pride ourselves as being enlightened. Our intentions are so lofty, we can’t stand to know we may have missed anything or anyone. It forms at least some part of our identity:
to question it somehow makes us question our worth. So many of us bear scars from a less welcoming form of Christianity that to question whether we might be leaving someone out makes our own participation in this thing teeter on the edge. It shouldn’t.

Because
there is good news here in this gospel. It is invitational, rather than prescriptive.

Just
because Jesus may be over there, with somebody we think is lost, does not mean Jesus is not also here. And that should be comforting. Jesus is there too. But the call of the gospel is that the repentance of the lost, of the one who is willing to change for
the gospel, is cause for a really, really big party. I mean, it’s a big party. There is laughter, and joy, and hope. It is big.

Over
and over this gospel talks about the celebration at the change, the repentance, the new direction of the one who was lost, but now is found.

And
everybody is invited to the party of the lost who are found. In the story, the shepherd and the woman are the metaphors for God. By the way, this is the only parable that uses a woman as a metaphor for God. God does the searching, the finding, not us, not
the religious insiders, in these parables. And everybody else, the religious insiders, the already found, are invited to that big party to celebrate. The righteous, the insiders, didn’t define what was lost or do the finding, but were simply invited to a
party. The question for the insiders is; “will I celebrate this finding?” Or “will I stay home and grumble because I’d really rather that the lost stay lost?”

We
don’t have to go to the party.

But
we may find that if we can find it in us to celebrate the other, to celebrate the lost who is found, the one who is different from us, the one who has found something that we may not have ourselves, that we are changed too in the process. We may find our
own repentance, our own new direction. And guess what? Then the party starts all over again. Because the lost aren’t just over there somewhere. The lost are right here too. The call to be open to find a new direction is not just for ‘those people,’ it is also
for us. That is how the Jesus movement stays countercultural, and resists becoming a new empire of like-minded Pharisees.

And
it is really wonderful news that one way we get to find a new direction is by going to a party for somebody else, isn’t it? We are changed again and again being open to the movement of the shepherd of the lost sheep in our own lives and the lives of those
who seem otherwise lost, but are found.

Paying
attention to the lost means, at least in part, being willing to base our relationships not on merit but on mercy. When we do that, we can see how the other is changing, allowing it to open in us a new direction again and again. And the party just gets bigger
and bigger!

We
had an unlikely visitor on one of our social media sites this week. He made several unflattering comments about an article we had posted on environmental stewardship. I even had to delete one because it resorted to attacks and name calling rather than the
respectful dialogue we expect on our social media. I engaged him in a private chat to explain why I had deleted his posts. And at first, I was sorry I engaged him. I thought it was a lost cause. The conversation was about climate change and I was sure that
this conversation was going to stay rooted in secular politics, which I see as not grounded in truth. For me, this person had been lost— someone I would not have been willing to see, just as the Pharisees could not see the tax collectors.

But
for reasons I don’t completely understand, I entered a dialogue with this person. We shared conversation and points of view. I do not think he will be going out and campaigning for an end to carbon emissions anytime soon. But we did find common ground and
a language for relating to our shared concerns for the environment through our faith rather than through the divisive language of partisan politics and secular culture. And that was a reason for a celebration. Both of us were found in different ways, and
I was glad to rejoice in that. Where will we look for the lost in each other? In ourselves?

So
we go today to celebrate, to a big party. 150 years of St. Paul’s doing this thing— reaching out, creating community, building homes for the elderly, assisting orphans in Tijuana, and showering the homeless. And we are having a party to celebrate today.
But it isn’t a party to say, “look how great we are” although we may be pretty great if I do say so myself. It is a party of rejoicing to say “look at what has been found.” And we wait to be found, again and again. God’s been finding us and finding others
through us again and again for 150 years. Where will God look for the lost through us next, and how will we be found again in the process?