Skip to content
Home > News > The Sunday Sermon: God dwells in all creation 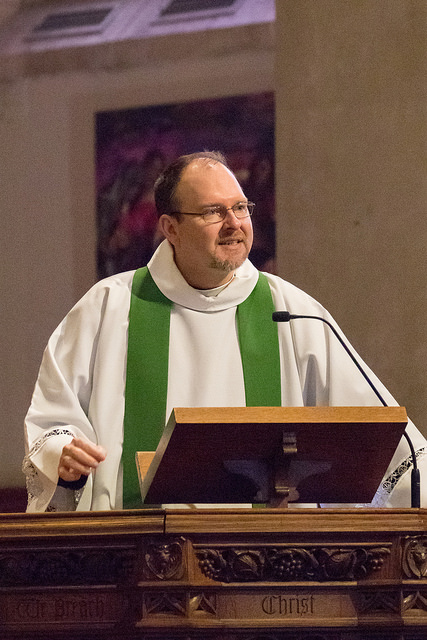 It’s a regular pattern. Disaster strikes– maybe it’s a flood. Maybe it’s a tornado, or a hurricane. Maybe it’s an earthquake. There are many casualties and lots of devastation. And before relief efforts can really get fully underway, voices will start assigning blame. “God has rendered judgement on America for….” and you can fill in the blank with a variety of suspected causes.

Frankly, I don’t think I believe in the same God as those folks. This kind of exclusive, judgemental, distant God sits somewhere else and doles out punishment based on some kind of rigid standard of being– a standard of being that tends to look suspiciously like the speaker of the pronouncement and less like God, at least to me.

While my God and that god don’t look the same now, it isn’t hard to find a common historical source of that God in the Christian tradition.

One of the primary models of understanding God in both Hebrew and Christian thought has been of God as king: Jewish thought, Christian medieval thought, and at the Reformation, thinkers explored their understanding of God using the dominant governance structures of their times, namely that of a king ruling over subjects (McFague, p. 63).

If the dominant model is king ruling justly over subjects, then it follows that when the decrees of the the king are broken they merit punishment. It isn’t hard to understand how, when following our trajectory of Christianity, a very misguided pastor today might set up a God is his image to imagine earthquakes and tornados reigning down as punishment of a king who is displeased with the breaking of a perceived commandment.

We aren’t immune in the Episcopal Church from seeing God as being on our side and still seeing God as a distant other– in fact a high liturgy can exacerbate that, creating a sense that God is to be found nowhere except for in a special tabernacle. I might joke myself that God is unknowable except for in good liturgy and in a high understanding of the sacrament. That can become an idol for us.

But we do not in this country, have pronouncements from monarchs– or at least I hope we don’t. If our understanding of power has shifted in this age and monarchs are not relevant to us, what does that mean for our understanding of God when so much of our historical understanding is based on a power structure of God as omnipotent monarch? I would like to submit to you this morning, on this Creation Care Sunday, that it is important not to be too complacent with the image of God as King, of God as Ruler.

Theologian Sallie McFague has spent her life playing with alternatives to that model. She is very clear that what she does is play- fanciful, metaphorical, imaginative, and not prescriptive or proclamatory. We are so accustomed to wanting to hear news about God that must come from the mouth of a kingly ruler, so that we must conform to in order to please the king– even if it is at a subconscious level– that it is hard to hear imaginative and creative, alternative pictures of God, but that is what she offers. Instead of God as patriarch, monarch, or Father, she offers God as Mother, Lover or Friend– not as trinitarian doctrine but as ways to break the idols we have fallen into, the idolatry of thinking we have a firm grasp on understanding God and keeping that God in our understanding rather than seeking to stretch ourselves to grow towards God.

So on this creation care Sunday, I’d like to suggest that if you are open to it that experimentation with how we view God can be a good thing. We have this story of wonderful and warm hospitality in the gospel, a story addressed to followers of Jesus about Jesus going to prepare a place to stay. This passage was in the lectionary for Friday at the noon mass, and for the folks there the opening passage about preparing a place, a house with many dwelling places evoked images of openness, inclusiveness, and receptivity. Jesus says he is the way to get there. But Thomas and Philip, perhaps hearing this as an exclusive proposition, as a kingly command, get concerned they don’t have a map to this place. In the final paragraph, Jesus relates that the way is not so much a physical map to get to a place, but something else entirely. Jesus describes a kind of interdependence with God the Father that doesn’t look at all like a king-subject relationship.

And that is what the work of McFague offers us, I think– a glimpse into the way, the truth, the life incarnate. What she presents is the idea of the world itself as God’s body. Take a moment, if you dare, and put aside whatever picture you have of God. If you have an image of God as lord, king, or patriarch, I invite you to try for a moment to set that aside. I promise lightning will not strike. If you have become jaded of those images, and God has become a myth for you, I invite you to try suspending that for a moment, to let some playfulness enter in.

This God is infused in everything, but God is not reduced to the world even though God’s body, the world, is ‘at risk.’ In the words of McFague, “The world as God’s body may be poorly cared for, ravaged, and as we are becoming well aware, essentially destroyed, in spite of God’s own loving attention to it, because of one creature, ourselves, who can choose or not choose to join with God in conscious care of the world… In [this metaphor] the notions of vulnerability, shared responsibility, and risk are inevitable. This is a markedly different basic understanding of the God-world relationship than in the monarch-realm metaphor, for it emphasizes God’s willingness to suffer for and with the world, even to the point of personal risk. The world as God’s body, then may be seen as a way to re-mythologize the inclusive, suffering love of the cross of Jesus of Nazareth.” (McFague, p. 72). Our lack of care for creation in this imagination is, perhaps, a crucifixion.

“I am in the Father and the Father is in me.” “The Father who dwells in me does his works.” “The one who believes in me will do the works that I do.”

McFague fascinates me because she takes a completely different approach to environmental justice. Most theologians take an ethical approach, that is: “What should we do to care for creation?”, or “What, in caring for creation, serves the good?” There is nothing wrong with that, but ethics is a tricky business, and most of us are at risk of running right into the same problem the televangelist runs into: do good stuff or God the king will be mad at you. (There are much more robust ways of doing ethics, of course.) Ethics is not necessarily but can also be a detached intellectual and cognitive process, removed from the emotional and spiritual drivers that I believe truly affect change.

But McFague’s approach for environmental care is not based on ethics, not based on political revolution, but based on this idea of who God is at God’s very being and what that means for discipleship and personal transformation: If God’s body is offered to us in the radical self-giving of the world, how does that inspire consumers to resist the temptation to consume more and more of God’s body, and to live more simply? That call comes not simply from an ethical mandate to conserve resources but from deep personal transformations to live changed lives that are mindful of the self-emptying love of God– a transformation that is contagious, and spreads, and loves the world- God’s body- as neighbor, because what else might one do when faced with such a radical, self-emptying love? This is a body, a world, that gives so generously of itself, depleting itself of its own resources to those who it sustains without regard for its own sustainability! It is no wonder that McFague invokes the sense of motherhood in her terms for God (putting aside for a moment the painful experience of those whose experience with their mothers is not of a nurturing self-giving figure). But invoking that self-giving being demands an emotional response- a spiritual response- of transformation.

A few years ago, I was visiting my brother in Hawaii. My brother is a marine biologist. We were out on his boat and came across a milk jug that was mysteriously floating through the bay. Without hesitation, my brother cut the engine, jumped into the bay, and called for a knife– I had no idea what was going on. He dove down and came up with a giant turtle. It was entwined in fishers line attached to the floating milk jug. The line had been there so long there were grooves on the turtle’s shell. My brother struggled in the water to hold this terrified giant turtle still while working to free the line with a knife, and in the process cut himself. But then the turtle went free. That was a holy moment for me, and God was there, both in the suffering of the turtle, in the willingness of my brother to risk himself for the turtle, and in the new life this turtle now had. There aren’t any shoulds for me in that story. I care for creation simply because that story is beautiful. It’s a love story. It demands my all, my love, and my own self-giving- my own mothering, if you will.

We will go across the street into the park in a moment to perform a liturgy of blessing for creation. There is a view that a blessing sets something apart as holy. I think that view is problematic and perpetuates the dualism of the monarch/subject problem. Barbara Brown Taylor in her book An Altar in the World describes the act of blessing as “seeing things from the divine perspective, participating in God’s own initiative, and sharing in God’s own audacity.” If we have the imagination to try on the idea of the world as God’s body, then as we go across the street and bless the park, we are calling forth the holy that is already present in that park. Because God dwells in all of creation: in the mountains and beaches; in the birds and the bugs; in me, and in you too.

Harwood, John T. “Theologizing the World: A Reflection on the Theology of Sallie McFague.” The Anglican Theological Review. http://www.anglicantheologicalreview.org/static/pdf/articles/harwood.pdf, accessed 5/13/17.