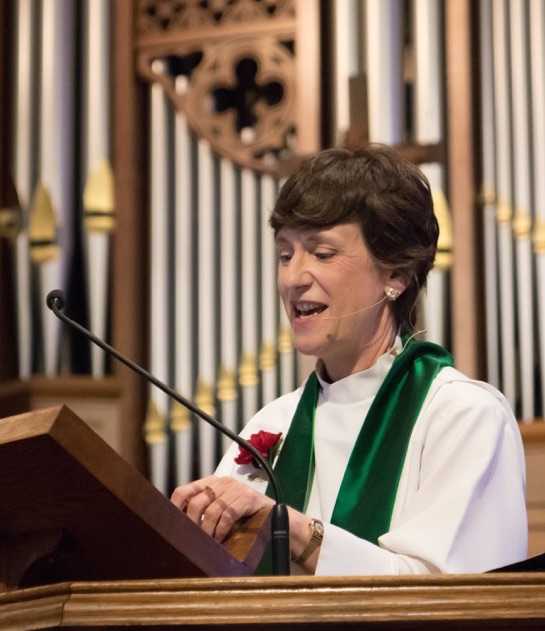 It was a chilly February evening in Alexandria, Virginia. The church was full and warm. I knelt before the bishop, and my priestly colleagues gathered around me. Warm hands pressing down on my head, my shoulders, my back. Bishop Theuner began the ordination prayer, and at the appropriate moment, all others lifted their hands while his remained. I felt the weight of all those hands lift off my shoulders, and immediately felt a lighter, gentler weight settle in their place, although there was nothing there. I remember thinking, “this is the yoke,” and feeling intensely grateful for the gentleness of the yoke of Christ.

There have been a few times in the intervening 20 years when that yoke hasn’t seemed quite so gentle. I think my esteemed clergy colleagues here will appreciate that. We could all tell tales … and for that reason, among many others, I am deeply grateful to our staff clergy and to our non-stipendiary clergy who participate in leadership at the cathedral, and who continue to wear that yoke willingly and joyfully. And I give thanks today for the long and faithful priesthood of our brother Alden Franklin, who “slipped the surly bonds of earth” late last Tuesday, on the eve of St Francis Day.

For a more challenging view of the yoke, I recommend the poem by the 17th century poet priest George Herbert. Its title is The Collar, and that’s a deliberate double-entendre recalling both what the Brits call the dog-collar (ie the clerical collar) and the old word for rage or tantrum, choler (pronounced like collar).

We are all about collars today, as we celebrate both clergy appreciation day and the blessing of the animals, in honor of that gentlest and most extreme of saints, Francis of Assisi.
The irony of our celebration is not lost on me: we remember the saint who worked to bring peace during the Crusades, in a week when we are heartbroken and outraged by an act of unthinkable violence during a concert in Las Vegas. Francis learned early in his life that violence is never the answer, that taking up arms is an act that leads to death, not life, that human beings who are seduced by a culture of arms become corrupt, diminish their humanity, and lose sight of the teachings of the Prince of Peace.

What kind of madness leads someone to stack armloads of weapons in a hotel room and open fire on a crowd of strangers who are simply enjoying an evening of music? The compulsion to fire bullets ever faster, ever farther, ever more destructively is a kind of addiction, and it afflicts thousands of our fellow Americans, with the result that this country is in the midst of a public health crisis, far more serious than our local Hepatitis A outbreak, and which is not being addressed by our national leaders.

When the teenage Francis put on his shiny new armor and trotted off to fight against the citizens of the neighboring town, he had to be able to look his enemy in the eye before he could injure him. Surely that was a more civilized way of life. But even so, after being captured and held to ransom for a year, Francis saw the light and embraced peace-making instead. Recuperating from the illness he had contracted in prison, he discovered the gentle joys of God’s creation, and in the tranquility of the Umbrian countryside he heard the voice of Jesus, whose yoke is easy, whose burden is light, saying, “Build my church”.

Francis refused the priesthood, although eventually he did consent to be ordained a deacon. He didn’t want to be tempted by power or to rise through the ranks of the church. He dedicated himself to leading a revolution from the bottom: his order of the Friars Minor or Little Brothers owned no property, ate what they could beg from day to day, resisted institutional order and material security. They followed the example of the creatures: the birds who neither sow nor reap, the forest animals which take only as much as they need, dependent on God’s daily provision of the bare necessities of life.

From Francis and his brothers we learn simplicity of life. We learn to take Scripture seriously – to follow Jesus wherever he leads, to set our hands to the plow of the Gospel and not look back. And we learn to broaden our compassion, to open our hearts to the small, the overlooked, the forgotten. We learn to love the animals around us. We adopt from animal shelters, we cherish the small mammals, birds, reptiles, and fish in our care. We feed them, keep them clean and safe, pay for medical treatment when they get sick, and finally, when the time comes, we repay their trust in us by giving them painlessly back to their Creator, even though doing so breaks our hearts.

The gentle yoke of Jesus guided Francis of Assisi from youthful foolishness to a single-minded devotion to the purest principles of the Gospel. He willingly accepted that yoke as he accepted his call to build the church by building a community of love, and he found great joy and contentment in answering that call. We too can accept the yoke that is easy, and cultivate community right here. We can answer the call of Jesus to come to him and lay down our burdens of ambition, anxiety, and judgment. For God knows we are weary of living in this culture of fear; we are tired of the violence, the meanness of spirit, the multiple addictions that beset us. We want, like Francis, to be peacemakers in this troubled world. Take his yoke upon you and you will find rest. Francis found his rest when he gave his life to the Prince of Peace. What is to prevent us from doing likewise?