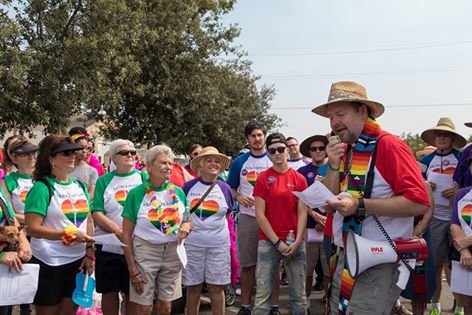 Pride is a time when people come out. Come out of hiding. Come out of dark places and into the light. When people celebrate things that for many years were visible only in secret places.

This reading today is part of Jesus’ famous Sermon on the Mount. He is talking to a people, the people of Israel, who have been beaten down. They have been taken over and occupied by Rome, and others before Rome, all the way back to the time of the Babylonian conquest. Time after time they had thought they would be able to come forth, and live in their identity as God’s people, and time and again they retreated to their ghettos, beaten back again by the powers of empire, gone into dark places; able only to celebrate who they were in secret.

Jesus makes an argument. He argues on the one hand against the zealots, who wanted to fight back against the empire with violence. He says that’s not how the kingdom of God works. That’s not the way to win.

He makes his argument against the Pharisees, too: that the kingdom of God– which lives under the law of neighborhood instead of empire’s domination– that God’s law of love isn’t in some far off place but the kingdom of God’s love starts right here, right now. Jesus fulfills the law and he tells his audience that love is already at hand, seeping from those ghettos and those hidden places and those refuges where the people of God had been hidden for so long. Love will shine and spill over into the rest of the world.

My friends, the kingdom of God’s love is at hand today as well, and it is fearless! God is here, and love abounds.

Just as it was true so long ago, the kingdom of God’s love originates in the hidden places and comes to fruition when the light comes out from the bushel and shines brightly.

The first LGBT march in San Diego was in 1974. Some of those folks marched with paper bags on their heads because they could not let their light shine. We have come a long way. Just look at the radiant light all around us today! It is hard to even call this a gay ghetto, but here we are.

And talk about salt! Salt is what gives food its flavor. It makes food more interesting. If you look around us today, I’d say we’ve got a lot of salt, a lot of flavor, here at the pride today, and I’d bet we will see a lot more flavor as the day goes on. The LGBTQ community is some of the salt that makes humanity interesting.

Sadly, somebody put up a sign near the cathedral the other day that questioned whether our community needed to have a bushel put on it, whether we as an LGBTQ people were embraced fully by the love of God.

But let me tell you something, the LGBTQ community doesn’t need somebody’s sign to tell us whether to let our light shine. Just as in those ghettos of old, God has always been here. We march today as the church not because the LGBTQ community needs the church. We march today because the church needs the LGBTQ community! The church needs the salt of LGBTQ people and all kinds of people to mirror God’s own creativity as we shine our light in the world. Because make no mistake, being gay is a gift from God, a treasure, a light to let shine. And the church needs straight allies to witness to power of love across difference, to vulnerability, and to openness in difference and for their own fearless love in shining their light on us in this long struggle for equality. We all of us together make up the many flavors of this human family.

And church, let’s taste that salt of the earth and let it make us thirsty: thirsty for the love of God that is already at work in the world, and let us use it to allow our own light to shine more brightly in a world that needs it desperately!