‘There he lay, a vast red-golden dragon, fast asleep; thrumming came from his jaws and nostrils, and wisps of smoke, but his fires were low in slumber. Beneath him, under all his limbs and his huge coiled tail, and about him on all sides stretching away across the unseen floors, lay countless piles of precious things, gold wrought and unwrought, gems and jewels, and silver red-stained in the ruddy light.’

So J. R. R. Tolkein describes Bilbo Baggins first encounter with Smaug, the centuries’ old dragon of his masterpiece The Hobbit. Smaug had conquered the mountain kingdom of the dwarves, leaving no male alive, and bringing such devastation to the surrounding area that the mountain became known as the ‘Desolation of the Dragon’ as ‘there was neither bush nor tree, and only broken and blackened stumps to speak of ones long vanished’. For the decades that followed his conquest, Smaug lay upon the great treasure trove of the dwarves, ‘his long pale belly crusted with gems and fragments of gold from his long lying on his costly bed’. 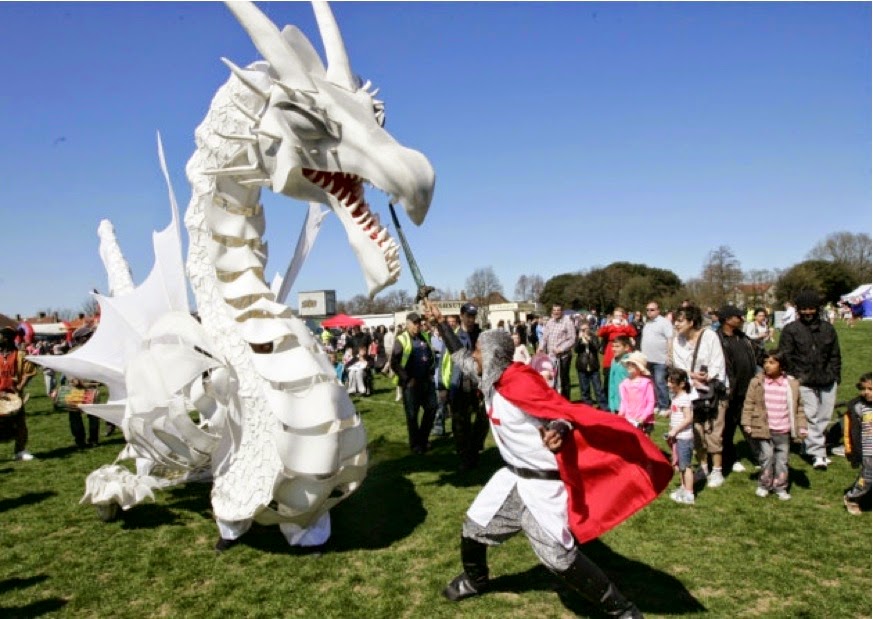 My friends, tonight is the night of dragons! There is one waiting for you in the Great Hall after the service, so if you need to go to the restroom before then, do so in pairs! For Tolkein, dragons were a serous business. In a 1938 lecture, he describes them so: ‘In whatever world he had his being it was an Other-world. Fantasy, the making or glimpsing of Other-worlds, was a profound desire. I desired dragons with a profound desire’.

If he were here this evening, it might have appeared a little odd to Tolkein that our dragon is made out of bread, pieces of which we will give to our children to eat. The eating of dragons is of course something that all good parents should seek to expose their children to. Yet the real danger in our celebration tonight is that there is no danger, no fear, no trepidation that we too might stumble upon a profoundly destructive desire.

The dragon of Tolkein’s fertile imagination was so smitten with desire for gold that it had become on it another skin. Smaug the dragon, had quite literally put on an armor of desire, of gems and fragments of gold. A fitting image to place in contrast to the one that Esdras paints for us of the great number of people assembled on Zion, who have put off mortal clothing and put on the immortal. No longer clothed by human desire, but clothed by the defeat of desire, the way not of self-aggrandizement, but of self-donation, the Way of the Son of God.

And so, lacking in danger as we are with our bready beast awaiting on the banquet table, it is, of course, St. George, who valiantly rides in to the rescue. As you can read at the back of your service booklets this evening, the legend of St. George is of a rescue from the danger not only of fire-breathing scaly monsters, but of what people will do, even to their children, when they become desperate enough for their own survival. For as the story goes, when faced with starvation from the siege the dragon had laid upon their town, having run out of sheep to feed the ghastly creature, the people of “Silene” in Libya, drew lots to decide which of their children would be offered up. And it is only when the King’s own daughter is put forth for sacrifice that our hero George rides up, slays the dragon and all is well that ends well. God save the Queen, indeed.

For Tolkein, when he wrote his books about Middle Earth the dragon of desire for destruction loomed large throughout that period in the form of Nazi Germany and the terrible power to obliterate that we are capable of visiting upon one another when the desire for destruction goes unchecked, witnessed in the slaughter of the Holocaust. It was not hard, in the years that people first read his work on dragons and those who dwelled in the shadows, to see how art not only imitated life, but offered a profound warning of what happens when we put on the armor of darkness.

So what of us, in our own time of sieges from Donetsk to Homs? What of our vocation to cry for God and St. George in our own communities where desire lives large in our relentless quest for more? What of the Church in a world still beset with dragons?

One answer to that challenge of how we might live out the Christian vocation in this world might lie in us asking what it is, exactly, we are up to here this evening. On the face of it, we have the appearance of something akin to an ecclesiastical version of Mardi Gras, with special costumes, and loud music, and seemingly endless processions. At first glance, then, this evening’s service appears to be something of a show, a piece of liturgical theater. And in many respects, that is exactly what it is. the liturgy is the great drama of the Church, it is how we put form, through song and word and action to the ineffable, to that which is beyond words. And Anglicans, Episcopalians among them, believe particularly that it is through this dramatic act of worship that we come to know God. ‘Lex orandi, lex credendi’ – literally, the law of praying is the law of believing, or more colloquially, praying shapes believing.

Given this, and given the centrality of this way of approaching the mystery of God in the Anglican tradition, what does our worship say of what we believe about God and one another that might be good news for a world still under siege?

I think there are a couple of useful answers to that. The first is particular to this evening’s festal evensong in celebration of St. George. For over 50 years, this cathedral has celebrated George, not merely because it might be true that there are one or two anglophiles living here in fair San Diego, but more deeply because in celebrating St. George, in singing ‘God Save the Queen’ and ‘O say can you see’ at the same service, we are proclaiming that this church community has a connection not only to the Church of England, but to all Anglicans around the world. Tonight is more than 50 years of celebrating the truth that as Anglicans, we belong to one another, that we have a part in one another. And in a world where sectarianism and the desire not to be in fellowship with others is as strong as perhaps it has ever been in the past century, that we are still a global Church held together with bonds of friendship that are no more than the desire to be in communion with one another, is a witness to the potential power of unity in diversity that is well-worth maintaining for the sake of what is often a fractured world.

Beyond this, though, the second thing that our worship here this evening says is an even more profound mystery: it says that we belong to God. More profound, because when your news station next alerts you to another modern day siege of power over others, you will know that those people, far away across the globe, belong to God as equally and immeasurably as you do. More profound, because when everyday people continue to go about their daily lives oblivious to the homeless man or woman who begs for a morsel of food and a crumb of recognition, you will know that those invisible children of God belong to Him as mysteriously and completely as you do. More profound, because when you encounter your deep desire to be known, your burning passion to be loved, your unending search for the beyond, you will find on that long pilgrimage that the One you seek is already with you, poised to place a crown upon your head and a palm in your hand, and to die in your place as the God who gives it all away for you.

Tonight is still the night of dragons, but it is also the night of saints, not this time riding in on white horses, but walking out into this world looking much like you and I. The world needs people exactly like you. It needs you to love it, to nurture goodness within it as if it were indeed a precious gem or a fragment of gold. It needs you to believe that in the end, love prevails over hate, that the darkness cannot overcame the light, that it is life not death that has the final word. And the world needs you to sing songs loudly of hope and freedom. It needs you to live bravely for the sake of a gospel that would see all people set free.