Skip to content
Home > News > Christmas Sermon: We are Shepherds 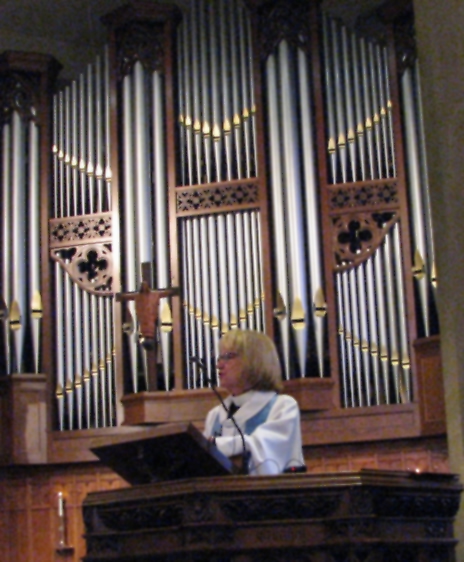 I was reminded recently from a commentary  written by The Rev. Dr. David Lose, a professor at Luther Seminary, how shepherds at the time of Jesus’ birth were not romantic or saintly types. From years of Christmas pageants, movies, lovely cards, and artwork, the image of shepherds which has emerged is of relatively clean, nicely coifed, animal lovers, who drop everything and travel to Bethlehem in order to find the savior of the world, based on the word of some angel.

But in actuality, men usually became shepherds because they couldn’t find any other way to support themselves—not out of a desire to protect cute little sheep.

In fact they often couldn’t stand sheep, let alone sheepherding was hard work, and would abandon them in a second if something better came along. Sheep were considered dirty, dumb, and stubborn and the men who herded them were just a notch above.  Almost. They didn’t exactly carry signs at the entrance of villages saying, “will herd sheep for food,” but pretty darn close.

And if they claimed to hear any angel it was entirely possible because they were either mentally ill or drank a little too much cheap wine.

You get the picture: there are plenty of “shepherds” among us now. They may not be herding sheep but they’re in front of us every day. Chronically unemployed, mentally ill, homeless, not clean, and generally people we would not have over to our homes for dinner. In fact, we often turn away when we see them or maybe even pretend to we don’t see them at all.

But in Luke’s Gospel, these are just the people the angels first reveals the birth of Jesus to and it is intentional. Professor Lose writes:

Should we really be surprised, then, that these are the first people
who will hear the message of God’s redemption? Across Luke’s Gospel one of the dominant themes is that God comes for those who are on the outside—those who are poor, vulnerable, and of no account to the world.

Why? Perhaps because they are the ones predisposed to listen and rejoice. Angles could have visited Herod or Augustus or Quirinius or any of the other powerful characters that have made their cameo appearances in Luke’s story. But why would they rejoice at the
announcement of a king? . . . What need have they of God’s redemption when, to all outward appearances, they themselves were like gods?

No, the angels come and sing their news to those for whom it means something. Outcasts, ne‘er-do-wells, the lonely, poor, and lowly— unwed teenage mothers and loser shepherds and all the rest—all, that is, who are in need. For, ultimately, the only requirement to receive God’s love is to need it.

It is easy to follow his logic. Indeed we see throughout all the Gospels how Jesus continually reached out to the marginalized so the fact his birth is announced to the shepherds makes sense. It helps set the tone from the beginning of Luke’s Gospel and proclaims something new is happening here. God, through Jesus, is coming into the world in a new way and saying in essence, who I find valuable is very different and much broader than who the world finds valuable.

And we would do well to pay attention to that.

However, Professor Lose’ last line is rather provocative, “the only requirement to receive God’s love is to need it.” Do we really need God’s love first in order to receive it? It sounds like God’s love is dependent on our action, in this case based on need, which seems contrary to any notion of grace.

But I think Professor Lose is on to something I had never seen articulated before in quite this way. We all need God’s love but our life situations, be they based in success, happiness, contentment or even just plodding, can if not blind us to our need, lull us into forgetting it.  And because of that, many of miss the many ways God tries to reach us.

But once again, let us return to the shepherds from Luke’s Gospel.  Perhaps because they were more away of their need, it was hard to be a shepherd and not know things weren’t going well, they were able to see and respond in the way we all should, “Let us go now to Bethlehem and see this thing that has taken place, which the Lord has made know to us.”

Consciously and with a sense of anticipation, not necessarily certainty. They didn’t know exactly what they would find but they went anyway, which may be as good a definition of faith in action as any there is.

In her book, Things Seen and Unseen, A Year Lived in Faith, author Nora Gallagher tells the story of a Christmas Eve service she attended, at Trinity Episcopal Church in Santa Barbara, her parish. As is so often the case at the “midnight mass” service she was struck by its beauty and sense of mystery.  And that in and of itself would have been a most wonderful gift.

However, after the service as she was walking to her car, she noticed Mike, a homeless man Trinity had recently hired as a janitor, who along with his girlfriend, slept on the church grounds at night. Mike was standing outside the church with his bedroll and said, “Merry Christmas” to Nora as she walked by.

I feel a drag on my shoes, as if they were weighted. I turn around. Only [the rector] Mark Asman’s car is left in the parking lot. He’s standing in   the hallway, turning out lights, when I walk back in. “Can Mike and his girlfriend spend the night inside tonight?” I ask him.

Mark looks out the door at the figure on the porch.

“Tonight of all nights,” he replies and gestures to Mike to come in.”

Mike was clearly the shepherd in this story but he was also the messenger, for he was able to awake a need in both Nora and Mark.  And the interaction between the three of them brings home brings home everything this season is about and how we are all shepherds in need of God’s love.

From Mike’s simple greeting, “Merry Christmas,” to Nora and Mark’s realization they could give Mike and his girlfriend a great gift, “this night of all nights,” the three of them experienced what it means to need God’s love, and in this case give it in ways they might have never known otherwise. Whatever happened after that would be in God’s hands.

Here is the promise of Christmas: God will reach out for us often from the most unlikely of circumstances or persons: a shepherd, a homeless man, even a tiny baby born to an unwed teenage mother but the essence of the message will always be, “listen to me, come to me, and know you are loved.”

It’s a love we need and is freely offered but all that much sweeter when we do respond, consciously and with a sense of anticipation, for whatever may happen. .

And nowhere is that more apparent than at Christmastime when we celebrate the birth of an infant in whose life lies the hope and great promise of the world.   May all of us say this season and beyond, “Let us go now to Bethlehem and see this that that has taken place, which the Lord has made known to us.”