Skip to content
Home > All Our Voices > Christmas at St. Jude’s Homes 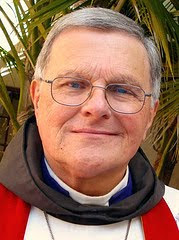 No season evokes remembrances like Christmas. For many of us, it is the memories of childhood and surprises under the tree or the day at our grandparent’s home. The Christmas recollections which bring us the most happiness are those from 1964 to 1969 when we had three Oregon nursing homes under the patronage of St. Jude. Altogether we served more than two hundred residents in three units. The units were about ten miles apart. The St. Jude’s Home in Sandy Oregon was where the brothers lived, in the second floor monastery.

From the very beginning in 1958 our policy was, along with treats and whatever came in the boxes of incidental gifts from parish guilds who signed up earlier in the year. We opened each wrapped gift marked “for a man, for a woman,” marked and rewrapped it to be sure we didn’t give a baldheaded man a comb or a diabetic a box of chocolates.

We would start buying specific items for residents in early November. They ranged from dusters and music boxes to electric razors and bedroom slippers or a stuffed animal. Once there was an elderly man named Joe who had a broken leg. Joe believed he would never walk again. Poking out of his Christmas bag that Christmas Eve was a shiny black and silver cane that spoke louder to him than all the encouraging remarks from the nursing staff. By the week before Christmas there was a large grocery bag for each of our 215 residents with his or her name on it. On Christmas Eve the brothers would load up a van and take the bags to their rightful nursing home.

On Christmas Eve, after finishing our regular day of work, we piled into cars, loaded the portable field organ in to one of our vans and drove off to our most distant nursing home. We started at five o’clock. Residents waited in the living room. Trolleys laden with hot chocolate, cookies and other treats stood by. Fr David or Brother Christian played the small pump organ and we all sang the familiar Christmas carols. Someone read the nativity story and we offered the Christmas prayers.

Imagine the Christmas trees in our nursing homes, depending on the size, with 95, or 53 or 62 bags of gifts underneath with each resident’s name to identify the particulars. You had to distribute the bags of gifts as quickly as possible. Many had no families and they doubted if there would be something for them. You could see the worried concern until a brother placed the right bag on the right lap. The party ended with the singing of “Silent Night.” We then helped folks back to their rooms, put them to bed or made them comfortable in an easy chair and assisted unwrapping the packages before departing for the next place to repeat the program.

Those parties became so popular that residents who had the option of being with relatives often asked families to pick them up Christmas morning. Off-duty nurse’s aides sometimes volunteered to help out. The last stop was St. Jude’s Home in Sandy, where we had the Christmas program in the chapel.

Every year a local pharmacy donated small boxes of Russell Stover chocolates. Those were the first found, opened and eaten. You felt good to the bone seeing the looks of genuine surprise and delight on the faces of the frail elderly. Tucking them into bed surrounded by treats and new things perhaps brought a flashback to a far distant, early time in their lives when something similar happened.

The Brothers had a break and then gathered around our own tree in the large common room upstairs. If there were any priests resident in the home, we invited them to join us. One in particular was a stroke patient who weighed over 200 pounds. There was no elevator in the building at that time so the only way he could get him upstairs was if four stout monks lifted him, wheelchair and all, up the stairway! It was a time of fellowship and merriment as we opened gifts, enjoyed some Christmas cheer and had some food. Near midnight we gathered in our chapel along with members of our mission congregation from the community for a reverent midnight Mass.

On Christmas day, though still tired from the night before, we relieved as many staff members as our numbers allowed to be with their families. Christmas was always the quietest day in the year in our nursing homes. Those residents who could, visited relatives or friends. The rest enjoyed a special breakfast and dinner with as many seconds as desired.

It may not have come close to Bob Hope entertaining the troops at Christmas, but we will always remember the peace and good will which prevailed being with the residents on Christmas Eve. We were their family and they were our community. It brought home Jesus’ insight “it is better to give than receive,” and his words, “In as much as ye have done it unto the least of these, ye have done it unto me.” It was as close as we will ever come to kneeling in the stable on that first Christmas.