Skip to content
Home > All Our Voices > A thousand cranes (updated) 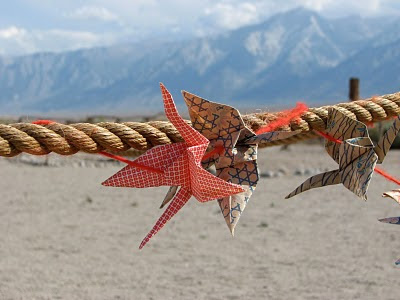 I took this picture of origami cranes that were twisted into the rope around the memorial marker at Manzanar, the site of one of the internment camps where Japanese Americans were imprisoned during World War 2. In the background, you can see the sheer cliffs of the eastern Sierra Nevada rising up to 14,000 feet behind this bleak place. (If you ever travel highway 395 up to the Owens Valley, you must stop at the national historic site at Manzanar–it is very moving.)

As part of the summer’s exhibition on Images of Peace, we will be making origami cranes after the Eucharist for the next few weeks, to be sent to Hiroshima and Nagasaki. Origami cranes are a symbol of peace. If you want to get a head start on how to do it, here are the instructions. Look for the tables in the Queen’s Courtyard next Sunday after Mass and join in this ancient craft for peace.

At the Forum on Sunday, 8 August, Mim Sellgren has adapted to Readers Theatre form the internationally well-known and poignant story of Sadako – a young Japanese girl who survived the Hiroshima blast but several years later died of leukemia as a result of radiation poisoning. Members of the Cathedral Drama Ensemble will present this Readers Theatre adaptation at the forum. There will be time for reflection and discussion following the drama.