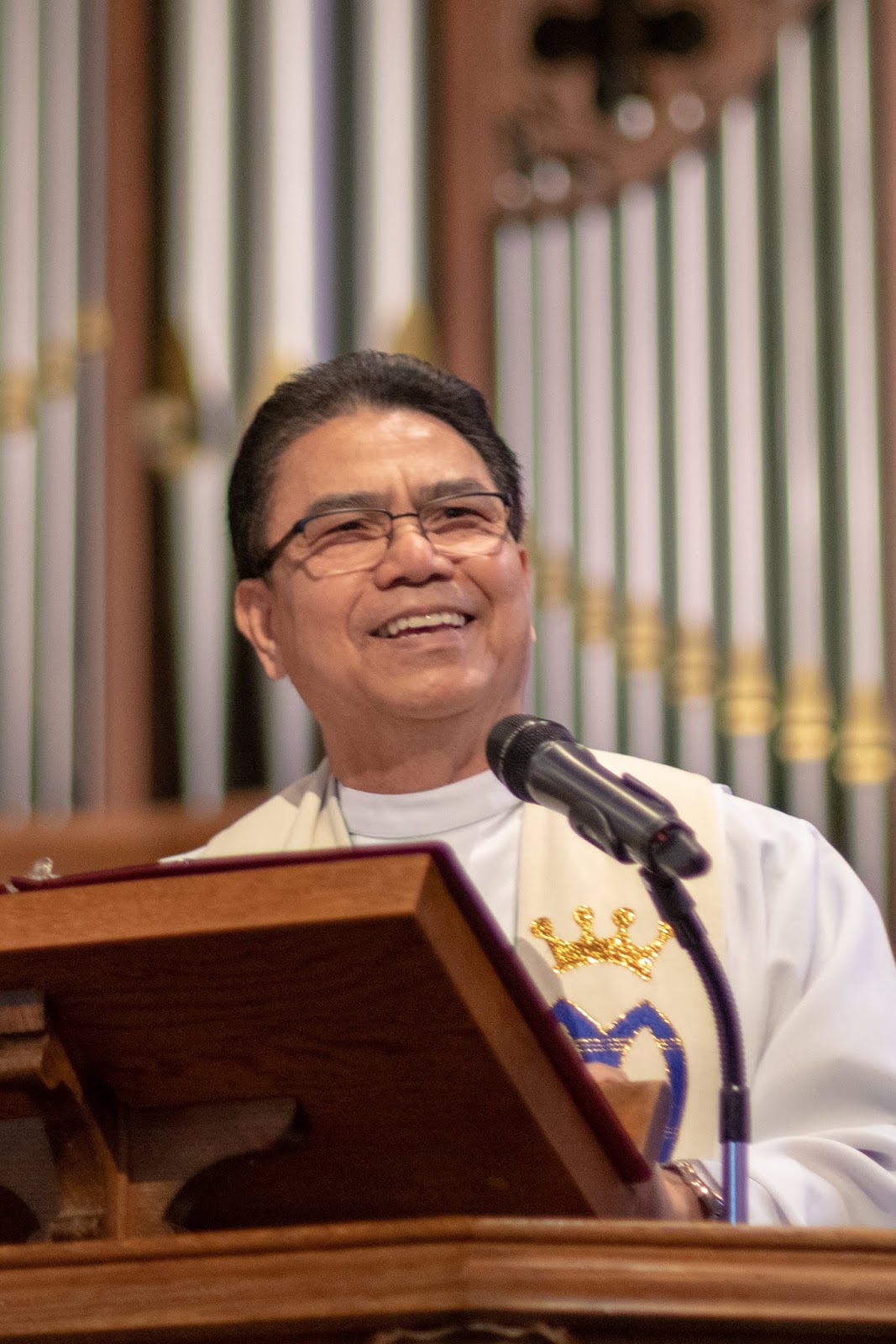 A visiting preacher was was testing the acoustics of the cathedral. He fidgeted on the microphone, tapped it a little bit murmured, “There’s something wrong with this microphone.” And the people replied, “And also with you.”

Today is the 1st Sunday of the Epiphany and we are celebrating the Baptism of Jesus. There are three words I want you to remember about baptism.

The first word we must remember is WATER. Water is the outward and visible sign of baptism.
Whenever you enter this beautiful cathedral, stop by that awesome baptismal font, wet your finger with water, make the sign of the cross and remember your baptismal vows.

Churches have various ways of baptizing people: sprinkling with water, pouring water or dunking the person in the water. Immersion is probably the most vivid symbol of baptism, because when you are drowned, you die with Christ in His death; and when you are lifted up, you rise again with Christ in His resurrection. St. Paul said, “If anyone is in Christ, there is a new creation; the old has passed away, the new has come.”

I remember the story of three ministers who went fishing: an Episcopalian, a Lutheran and a Pentecostal. The Episcopalian and the Lutheran (ELCA, that is) had been on a fishing partnership for some time but for the Pentecostal, it was his first so it was quite an adventure.

They rowed their boat to the middle of the lake but while they were there, the Episcopalian said he forgot his bait. So he stepped out of the boat, walked on water, took the bait from the shore and returned to the boat. The Pentecostal was amazed! “An Episcopalian walking on water?” Unbelievable! But he kept it to himself.

As noontime came, the Lutheran said he forgot his lunchbox, so he likewise got out of the boat, walked on water, took his lunchbox beneath a tree and returned to the boat. The Pentecostal was flabbergasted. “OMG! A Lutheran walking on water?” Incredible! But he kept it to himself.

Now the Pentecostal was seriously challenged. Pentecostals believe that the Holy Spirit is not only resident in them but also president in them. So he thought, “If the Episcopalian and the Lutheran could walk on water, I can also walk, or even run on top of the water.”

So he gathered his faith, stepped out of the boat and splash! He went straight down the water. He bobbed up and climb the boat, soaking wet and greatly embarrassed. The Lutheran and Episcopalian pointed to the other side of the boat and said, “Brother, that is where the stepping stones are!”
Baptism is the sacrament by which God adopts us as His children and makes us members of Christ’s Body, the Church. Water is the outward and visible sign and union with Christ is the inward and invisible grace. In baptism, we are born again, to grow in grace and become inheritors of God’s everlasting Kingdom. In baptism, God puts eternity in our hearts.

The second word, we must remember in baptism is SPIRIT. John the Baptist announced: “I baptize you with water; but One who is more powerful than I is coming; I am not worthy to untie the thong of his sandals. He will baptize you with the Holy Spirit and fire.”

At the baptism of Jesus in the river Jordan, the mystery of the Holy Trinity was unpacked. The Son was baptized and the heavens opened. The Spirit came and anointed the Son; and the Father said, “This is my beloved Son, with whom I am well-pleased.”

The one God in three Persons worked together: Father is Creator; Son is Redeemer and Spirit is Sustainer. Glory to the Trinity, the undivided unity.

The role of the Holy Spirit in the life and mission of Jesus Christ can not be underestimated. After baptism, Jesus was tempted in the wilderness but triumphed against all the wiles of the devil. The Spirit renewed his strength and empowered him for ministry. Claiming his mission statement from the prophet Isaiah, Jesus announced: ”The Spirit of the Lord is upon me, for He has anointed me to preach Good News to the poor, to proclaim release to the captives and opening the eyes of the blind, to set at liberty those who are oppressed and to proclaim the acceptable year of the Lord.”

Then he performed various signs and wonders, myriad miracles of healing and deliverance, turning water into wine, multiplying bread and fish, calming the storm, and yes walking on water. In all these, the Holy Spirit was His partner in mission and ministry.

The third and final word we must remember in baptism is POWER.

By the way, I am a three-point preacher. Someone asked me, “Father Fred, why do you always preach a three-point sermon? I said, three reasons: one, I am a Trinitarian; two, I am the third child in my family; and three, the most that people can remember in a sermon are three points. Though I notice lately that as I get older, there seems to be three things I’m beginning to lose: first, my hair; second, my memory and third, I can’t remember.

So help me out; what are the three words on baptism? Water, Spirit and— Power.

In the Book of Acts, 1:8, the disciples of Jesus were given this promise: “You shall receive power when the Holy Spirit has come upon you. And you shall be my witnesses from Jerusalem, to Judea to Samaria and to the ends of the earth.”

In Acts 2, this promise was fulfilled. The Holy Spirit came down in a mighty way, with tongues as of fire and resting upon the disciples. They spoke in multiple languages bewildering the multiracial, multicultural, multilingual Pentecost festival in Jerusalem. After Peter’s sermon, 3,000 people received the Lord and were baptized. They formed the early Church, growing in leaps and bounds as they witnessed to the love of God and love of neighbor, in the power of the Holy Spirit.

Today, our country and our world are in serious need of this power: not political power, not military power, not economic power but the power of the Spirit.

Many in our country have given way to the darker side of our humanity. Gun violence has risen and the culture of death has exacerbated. Hate groups have multiplied, racist acts have increased, love and compassion have waxed and waned.

The poor immigrants are demonized, the truth is manipulated, government policies are bent on building walls instead bridges. Hearts are getting cold to human suffering, eyes are getting blind to the tears of God and ears are getting deaf to the cries of the oppressed.

The power of the Holy Spirit given at baptism is the power of love and compassion. Jesus looked at the caravans of struggling humanity and his heart ached for they were harassed and helpless like sheep without a shepherd.

The poet George Elliot wrote, “If we have a keen sense of the ordinariness of life, it would be like hearing the blade of grass grow and the squirrel’s heartbeat and we would die at the roar that lies on the other side of silence.”

Indian evangelist Ravi Zacharias said, “Somewhere in this universe there is a place where all the heartaches and pains of humanity are funneled into. That place is the heart of God. God then channels these heartaches into His servants so that their hearts will also burn with compassion and they will long for a desire to help.”

As servants of God, we can never help lighten the load of others unless we bear that pressure in our own soul. Part of our baptismal vows says, “Will you proclaim by word and example the Good News of God in Christ? Will you seek and serve Christ in all persons, loving your neighbor as yourself? Will you strive for justice and peace and respect the dignity of every human being?” And for all these questions, we replied, “I will, with God’s help.” Oh that we may honor our baptismal covenant.

Let me conclude my message with hope. For even as I paint the grim scenario of the present, I always see a vision of hope. As missioner for Asiamerica Ministries in the Episcopal Church, I am part of an emerging community of unconditional inclusion.

I serve Episcopalians of various races and ethnicities: Chinese, Japanese, Korean, Filipino, Southeast Asian, South Asian and Pacific Islanders. I am part of the greater network of Ethnic Ministries: Asian, Black, Latino, Indigenous. Together with enlightened Anglo-European Americans, we are together building a New Community where we do not judge one another by the color of our skin, the smell of our food, the sound of our tongues, the accents of our English language.

We celebrate our diversity in all its protean forms: racial, cultural, gender. They are like fruits in a salad bowl; they are like petals in a flower bed; they are like fingers of God pointing to Christ.
The old, mono-chromatic, monotonous America is dying and the new multicolored, adventurous America is breaking forth. Can you not see it? Can you not perceive it? A society built on hate, greed, and selfish ambition will always die; but the society built on love, compassion and generosity will never die.

Twenty-one centuries ago, Epiphany was the revelation of God to the Gentiles—the mighty revelation that our God is not a tribal God but a universal God.

Now in New York City, whenever you see light at the end of the tunnel, stay away because that is a train coming! But here in San Diego, in the Golden of California, a new light is coming, breaking forth in the horizon. It is sparkling like a diamonds, it is twinkling like a star, it shines like the sun. The Church, perhaps the Episcopal Church will indeed become like this multicolored diamond, bursting forth in all its awesome, spectacular harmonious diversity. Shall we, the baptized in Christ, all come together in this wonderful celebration of our unity in diversity?

Now, may the Holy Spirit, given at baptism, working in us do infinitely more than we can ever hope or imagine. Glory to God and His Church by Christ Jesus to all generations forever and ever. Amen.

The Rev. Canon Dr. Winfred B. Vergara
Missioner for Asiamerica Ministries of the Episcopal Church
1/13/2019