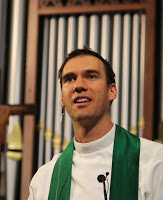 It was a Saturday in January in 1908, and it was cold. Ten inches of snow lay across the Hudson River Valley in upstate New York. A handful of Franciscan Friars and Sisters of the Atonement, a religious community of the Episcopal Church, gathered in the Chapel of Our Lady. Nothing was out of the ordinary, except Father Paul and Mother Lurana’s prayer: It was a prayer for Christian unity, a prayer that this small community would repeat for the next seven days spanning the feasts of St. Peter and St. Paul.

Over the following year Father Paul and Mother Lurana urged the modest public readership of their society’s publication, The Lamp, to promote this week of prayer within their various congregations. You could say the idea went viral — it caught on in just a couple of decades, rather than the couple of days it would take today. This year, as it has for years, the Commission on Faith and Order of the World Council of Churches and the Pontifical Council for Promoting Christian Unity of the Roman Catholic Church co-organized the Week of Prayer for Christian Unity, which began on Monday with the feast of the Confession of St. Peter and will end tomorrow with the feast of the Conversion of St. Paul. Some 1.75 billion Christians are invited through these two institutions to take part in this prayer.

Impressive, isn’t it, that an idea of such modest origins could come to carry so much influence so many years later? Yet it is not really surprising for us, for we are only here today but for the resurrection of a man whose small band of followers were persecuted and reviled, but whose remembrance and countless appearances down through the generations have shaped the very contours of human life. God is good and powerful and it is not surprising for us that such miracles as the growth of the church occurred from such a small beginning, but it is natural for us to wonder just how that happened. Probably the simplest answer of how the church came to be can be found in our celebration of St. Paul’s conversion experience today.

Perhaps two years after the resurrection, of which he was not a witness, Saul’s sudden and dramatic confrontation with Jesus on the road to Damascus marked day one of an entirely new life. The experience redirected his zeal for Christian persecution to that of promotion; he became a tireless ambassador for God’s Good News in Christ, enduring a litany of attacks on life and limb until his imprisonment and beheading in Rome some thirty years later. He founded house churches across thousands of miles of the Mediterranean, and stayed in touch by letters still preserved today. He preached the gospel to kings and peasants alike, and he used every method he could think of to persuade his audiences, from performances and references to current events to heady theology and sharp reproach. We are here this morning because God found and made to blossom in St. Paul an unstoppable and unswerving passion and faith.

We belong to a cathedral named after this apostle of clear-eyed focus, courage, and steady perseverance. And we belong to a time that is confusing, fearful, and uncertain.

The fact that this world is a wounded and broken place is not news to us. Indeed, it is easy to become numb to this reality, for it is exhausting to notice regularly the existence of suffering and discord around us. But we expect something different from the church. We expect more of what our gospel teaches us: more love, patience, forbearance, understanding, forgiveness. Yet just over a week ago many of us in the Episcopal Church experienced deep pain over the sanctions imposed by the heads of the Anglican Communion over our church’s full inclusion of women and LGBT persons in our sacramental life. Now these sanctions do not mean that we are being kicked out of the communion — that is not even these leaders’ decision to make — and our relationships with our sister churches around the world remain intact, though some bonds have been under increasing strain. Still, this action is especially disappointing for all of us; it does not align with our understanding of what the church is called to be: a refuge for the lonely, the forgotten, the outcast. It is a reminder that we cannot ignore the reconciliation work that remains among our Christian sisters and brothers. It is a reminder that the sin of the world does not stop at the walls of our churches.

This week our Cathedral community received another deeply painful reminder that we cannot ignore, that former dean Scott Richardson will no longer be a priest of the Episcopal Church as a result of misconduct. Clergy misconduct undermines our appropriate expectation that the church serve as a safe refuge for all people. It is a disillusioning reminder that an ordination does not make a priest immune to sin, and that such misconduct can be profoundly damaging to its victims. We trust our bishop’s view that the consequences that have followed have been justly imposed. Many of us can relate to the bracing nature of God’s gracious judgment when we have fallen short of God’s dreams for us.

May St. Paul show us the way ahead.

It is a way that will involve our broken selves — and we’ll continue forward, with God’s grace, anyway. God takes our imperfections and transforms us in ways dramatic and mundane; and even in our continuing conversion, we are not unspotted saints. St. Paul knew of this and prayed to God that his thorn in the flesh might be removed, his own reminder of imperfection. Somehow God thought it right to employ we not-unspotted-saints as the primary ambassadors, following in Paul’s footsteps, of God’s good news. That has led and will continue to lead the church into some dark places. And God’s grace has and will pull us ahead into the light again and again in God’s good time and in God’s good ways.

St. Paul’s way will involve work — lots of it. A dozen Cathedral leaders spent a year listening to more than one hundred of us, researching our history and neighborhood, discerning the Spirit’s movements in our common life, and discussing the future direction of our community of faith. Hundreds and hundreds of hours were spent developing, revising, and fine tuning this work that has become our Vision for Mission. During today’s annual meeting we will celebrate this accomplishment and launch its five-year plan, beginning with a bold 2016 budget. Together in the time that follows we will work to strengthen our bonds in love as we break bread and pray, proclaim God’s good news to the world by word and example, and strive for justice and peace among all people.

And St. Paul’s way will involve love — as much as we’ve got. This hard work will mean nothing, St. Paul reminds us, if we have not love. We will not all agree on the path ahead — we never have! — and yet we have come this far together. That is because we strive to be a welcoming place not just in word but in deed, starting with our coffee hour after worship. We look for new faces and those standing off on their own, and we welcome warmly. We serve together on committees and ministries and are gracious in the face of each other’s weaknesses and faults, noticing how they reveal our own. And we pray for each other and for this Cathedral community that our sense of unity would grow and grow.

When I imagine Saul’s vision of Christ as he lay dizzy on his back, I see Jesus as cosmic in scale, bigger and wider than our sins and our infighting and our discord. Perhaps this was the very moment that Paul realized that God’s grace was and always would be larger than any law, that each of us would remain within God’s good embrace if we so chose. Paul would spend the rest of his life working and loving this insight out into the world.

We still have a couple days left in this year’s Week of Prayer for Christian Unity. I’ll be praying for healing from pain and brokenness. And I’ll be praying for courage to continue forward, undeterred, with clear-eyed focus and steady perseverance in proclaiming God’s larger-than-life love and grace in Jesus Christ, as St. Paul hopes we would.