When death came it was an invisible enemy, striking down adults, children, animals. It must have been like God’s destroying angel, invading bedrooms and bomb shelters, catching the first responders as they raced to save lives and in the process lost their own. There was no Passover for the people of Khan Sheikhoun in Syria.

And on Palm Sunday, as Christians across the world sang Hosanna, “Save us Lord,” the bombs exploded in Tanta and Alexandria, Egypt, one in a front pew of the church, the other outside the door, killing and maiming dozens, not only the faithful and their children, but also the professionals assigned to protect them from just such an attack. No Passover protection there either, for the Coptic Christians in their holy places.

When the people of God escaped from slavery under Pharaoh, they knew they were not yet safe. Pharaoh, an unpredictable, dangerously volatile leader, had changed his mind before, and he would probably change it again. It took a national catastrophe, the killing of the first-borns, to distract Pharaoh enough that he finally let the people go. The headlines were filled with terror and death: the mass departure of the Hebrew slaves wasn’t the big news of the day. And after their on-the-hoof dinner, they slipped away into the dark, equally afraid of what was behind them and what lay ahead, not knowing where they were going, only knowing that somewhere out there in the wilderness was freedom.

Last Sunday the headlines were once again all about terror and death. Our observance of Palm Sunday would probably not have gained much media attention except for the fact that our Coptic cousins in Egypt had been attacked in the context of the very same worship that we were undertaking a few hours later, and so our voice was sought out. How tragic, how deeply ironic, that as we prepared to commemorate the brutal execution of an innocent man of faith, we gained public attention because of the horrific attack that killed dozens of innocent people of faith. In the very land where the people of God once celebrated the first Passover, the angel of death spread its wings, even as we began our week’s journey to the Passover of the Lord. And tonight, hours after our military has deployed a bomb of obscene capacity, we re-enact the first Eucharist, the last meal of a condemned man, a meal shared with friend and enemy alike.

Tonight’s Hebrew Scriptures and New Testament readings telescope as much as a thousand years into a few minutes. At one moment the people of God are eating their last meal in captivity, bags packed, sandals on, ready to hit the road, humming the Psalm as they go: I will lift up the cup of salvation … you have loosed my bonds … Praise the Lord!

And in the next moment Jesus is washing the dusty feet of his friends as they gather to relax in the holy city, the destination of their ancestors, and he is offering them bread and wine for body and blood, as a symbol of the death that he will now suffer on their behalf, the firstborn of God himself willingly shedding his blood so that God’s people may once and for all pass through the valley of death to the land of promise. As Paul reminds us, “As often as you eat this bread and drink this cup you proclaim the Lord’s death until he comes.”

We cannot escape the sharp juxtapositions of our story: firstborns killed to save God’s people. An innocent executed for the sins of humanity. An intimate dinner with a traitor at the table. A congregation that proclaims its trust in God in the midst of anxiety and fear.

Our faith is never tidy: reality intrudes no matter how hard we try to shape our practice with beauty, with carefully rehearsed words and movement, with familiar ritual.

We celebrate the Eucharist tonight, welcoming all, coming to the altar rail with friends and strangers, with the people who annoyed us today and the people we annoyed. We share a symbolic meal, the wafers equally tasteless for everyone, a reminder that the Eucharist isn’t about flavor but about coming together before God as one people. But then, after the Eucharist, we will celebrate a real meal together. Our soup supper continues our sacramental gathering, and we will celebrate the wonderful diversity of gifts and personalities in our congregation as we sample the different varieties of soup, knowing that the gift lies in the distinctiveness of each recipe. Think what we would lose if we mixed all the soups together, just as our community would lose if we insisted on a homogeneous congregation. We are one body, but that doesn’t mean we are all the same. 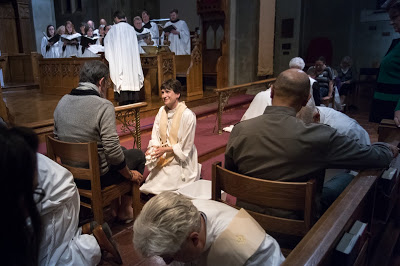 The third component of our gathering tonight, the mutual washing of feet, weaves yet another strand into the rich tapestry of our life together. In this intimate ceremony we serve one another as Jesus served his friends and even his betrayer. It may well be that you or I have at some point betrayed or let down the person who washes our feet. It can be excruciatingly uncomfortable to be served in this way. As Jesus points out, your feet may be clean, but that is not why we do this. As we wash each other’s feet we wash the feet of the refugees fleeing Pharoah. We wash the feet of Syrian children and Coptic clergy. We wash the feet of all the saints who have witnessed to the power of Christ in our lives. And we wash the feet of Christ himself, who loved us and gave himself for us as a fragrant offering and sacrifice to God.