This is the day we remember the story of Jesus, a man who lived among the vulnerable. He was a man who moved among people who had been forgotten, who had been outcast. He touched the untouchables. He loved the unloveable. 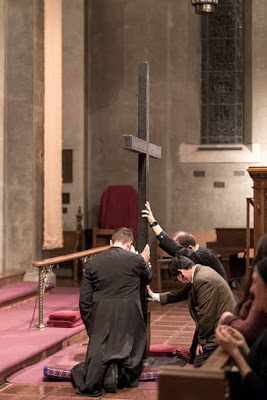 We remember his story today as we re-tell how he was arrested after being betrayed by one whom he loved. We remember how he was bounced around after that, from Annas, to Caiphus, to Pilate. Each of them wanted him dead, but nobody wanted to do the deed. While the text calls out the Jews, it was not the Jews in general who persecuted him but a select few religious leaders. They were in an unholy alliance with a head of state who lead the charge; they each had something to lose if this young Jewish man from Nazareth kept influencing their people to change. So they needed him to die.

We remember the story today of Jesus, accused, tried, tortured, and killed by powers that preyed on mob rule. We hear of Judas, who betrayed everything. We recall the story of the mob itself that was all-too-ready to be divided, that leaned perhaps just a little too easily into being manipulated. We hear the story of Peter, who wanted desperately to resist, and begins the story by cutting off the ear of one of the arresting parties in an effort to show his loyalty to the cause, but in the end succumbs to his fear of the cost of standing firm, and denies everything– three times.

And here we are. We are left in a world broken by powers that prey on mob rule. We learn more and more each day about the way we have been manipulated by fake news– all of us, by people of all sorts and political persuasions and background, each of us just a little too ready to read, share, and react to anything written to titillate us, to agree with our worldview, to bend us against one another, to get us to shout crucify at those we already don’t like.

I want to be one who resists. How often, though, when it comes down to it I find I may not be willing to pay the cost of resistance. Like Peter, my initial energy turns to fear and denial. No, like Peter I don’t know if I am ready to be as committed as I initially thought. Peter was so human that way.

And so we are left in this broken world. And wars rage on. And as we have learned about so much this Lent in the Forum, refugees and immigrants are left in the dust, crucified. And children die in the crossfire of our inaction. And the poor are left hungry. And the weak and the vulnerable, the very ones Jesus came to walk with, are left to die.

I believe we are good, us humans. I don’t see much point in self-degrading guilt. But this is a day also to remember that our human family is capable of destruction. Individually, we cannot choose not to participate in that. Putting gas in my car is an act of destruction of the earth, and I am complicit, as are well all. It’s unavoidability does not detract or lessen its truth. There are lots of other ways we are all complicit in the brokenness of this human condition, in crucifixion.

Good Friday is not about our goodness, lack thereof, or intent to do goodness. It is about the systems we create in this fallen world that destroy goodness despite ourselves, despite our desire for the good. The message of this day is that we can’t break goodness, despite ourselves. A love greater than us bears the wounds we inflict, despite the apparent victory of the brokenness of this day.

Good Friday is a time to acknowledge that there are things that we cannot mend ourselves today, places where we need a goodness that extends beyond ourselves. There are fences that we build, this human family, that rip us apart, and in so doing we make ourselves powerless to rip them down. The disciples, waiting at the tomb on Friday night, had no power themselves either in the midst of the darkness.

But in Christ, even though this day may be dark, they, and we, still wait. And we still hope.