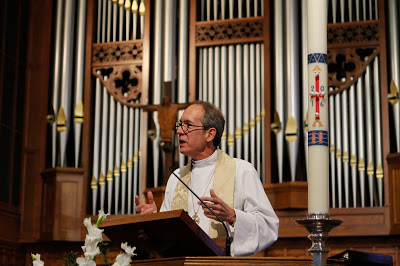 Come Holy Spirit: Touch our minds and think with them, touch our lips and speak with them and touch our hearts and set them on fire with love for you. AMEN.

I.
In college, I was trained as a mathematician. I was particularly drawn to the mysteries of the unknown and unseen. My last year was spent delving into the mysteries of Number Theory. Indeed, my senior honors thesis was a proof of the existence of a number field. Thirty-five years later, and an almost equal time away from a discipline that requires all but full intellectual immersion, that paper holds seemingly ancient mysteries even to me, its author.

And yet, my intellect and my world view continues to be one in which I seek clear solutions. Things are to be proved or dismissed. I suspect each of us carries that post-enlightenment propensity and drive toward certitude, at least to some extent. Indeed, in this twenty-first century so much that surrounds us gives us precision and definitive knowledge. Want to know about your ancestry? You can send your DNA away for analysis. It can be proved. Want to see how long it will take you in traffic to get to Los Angeles? Enter the address in Google maps, which takes us to the most universal proving tool: your iPhone. If there is any dispute about the exact time, the immortal Steve Jobs will end the debate.

II.
And yet, the really big questions remain a mystery that cannot be answered. Our best guesses elude a proof. Why am I here? Am I really loved? Do I matter? When will I die? And what will that mean? Mystery and unknowing are always with us. We really want to get certainty around these things…including this business of Easter.

Yet, the best we can do is to go to the story told, that once upon a time: “Early on the first day of the week, while it was still dark, Mary Magdalene came to the tomb and saw that the stone had been removed from the tomb.” Within moments, this woman who had followed Jesus sets in motion a chaotic seen. She rushes back to the others and along the way she concludes that what she has seen is explained by grave robbers: “They have taken the Lord out of the tomb, and we do not know where they have laid him.” In an instant, an apostolic foot race is on between Peter and John. For days Peter has been running away from Jesus, but he turns and runs to find him. The beloved John wins the foot race but Peter enters the tomb first. What they see is linen wrappings and no corpse. Apparently Mary’s return to the tomb was less dramatic. But clearly the three are there. They are up to their eyeballs in mystery. Where is he? What does this all mean? We are told that John believed but did not understand. Whatever his nascent believing may have been, he and Peter returned home leaving Mary, thus setting the scene for an epoch encounter.

So far, all that has been reported can be explained. It is possibly just another ugly event in a horrible week—grave robbers, the Romans again, who knows? Mary’s weeping is understandable. But through her tears she is drawn to seek to know, and so she too looks into the tomb. This is something the impetuous Peter has already done. John had looked in, but not Mary. Now, in this moment of solitary grief, Mary looks in. And she sees that she is not alone. We are told that there are two angels, who ask her “Woman, why are you weeping?” Without any note of consternation or surprise by this heavenly appearance, roots her grief in the world, “They have taken away my Lord, and I do not know where they have laid him.” For Mary, Jesus is still dead. Angels do not take her to the resurrection. She just wants to know where the body is so she can grieve properly. She is trying to order her thoughts and feelings in this broken world where Romans crucify, terrorist blow up bombs, cancer wins, and the dead stay dead. In this story, you and I are Mary. We stand at an empty tomb and ask, “What does all of this mean?”

III.
It is at this point that Mary hears another voice. It comes from behind her. We know this because she turns around and sees a man she thought was the gardener. And it is when this man speakers her name, that she recognizes him to be Jesus. It is that intimate and loving knowing that is conveyed by knowing and speaking the name of another that leads to recognition: “I am the good shepherd. I know my own and my own know me.” Mary… Rabbouni!

And yet, what makes this recognition happen, what takes Mary from the emptiness of the tomb, looking for the dead body of Jesus, to facing the risen Christ, is the act of turning around. The Greek word used here is metanoia. It is this moment and movement of reorientation that allows her to encounter the holy. It is in turning that she finds a new direction and the opening of new life. All of this propels her to then be the apostle to the apostles: “I have seen the Lord.”

I want to be absolutely clear in my proclamation this day. We proclaim that Jesus died on the cross and on the third day rose again. This is the proclamation. I cannot describe how. I cannot prove it. I believe it because of conversion that God gives to each of us. I believe. Help my unbelief.

IV.
What I also believe is that Jesus’ resurrection is a message to us to live lives that are changed and different. We are to be a community of Jesus that changes directions, like Mary, and turns around. What that ultimately looks like is a people of God that trusts in life with God beyond this world, and so can risk living today for the least in this world. Again, we cannot prove this like a mathematical question. We have to take it as a matter of believing that if we follow this Lord Jesus we will find life and have it abundantly in this age and in the age to come.

When I was a college senior defending my honors thesis, a curious thing happened. The presentation was in front of the department faculty. About halfway through the proof, Dr. Ebby found a mistake in my work. The wheels started to come off the bus. But then Dr. Alvarez found a second mistake. Those were corrected, a crash was averted, and I reached the blessed conclusion. I think this business of following Jesus in the way is a bit like that. We may think we are on a fact-finding journey, but really we are on a pilgrimage in which we gain insights from our fellow pilgrims. The final resolution or answer is ultimately not ours to claim or grasp but is given us in the fullness of time as a gift.

Beloved: today we rejoice in that gift. Jesus is Christ is risen today. Alleluia. Let us turn with Mary and see him. And then, let us tell others the news by our words and as we live resurrected lives of giving, service and love. The Risen Christ is behind you. Turn around! Do you hear him calling your name?