Skip to content
Home > News > The Easter Sermon: from darkness to light 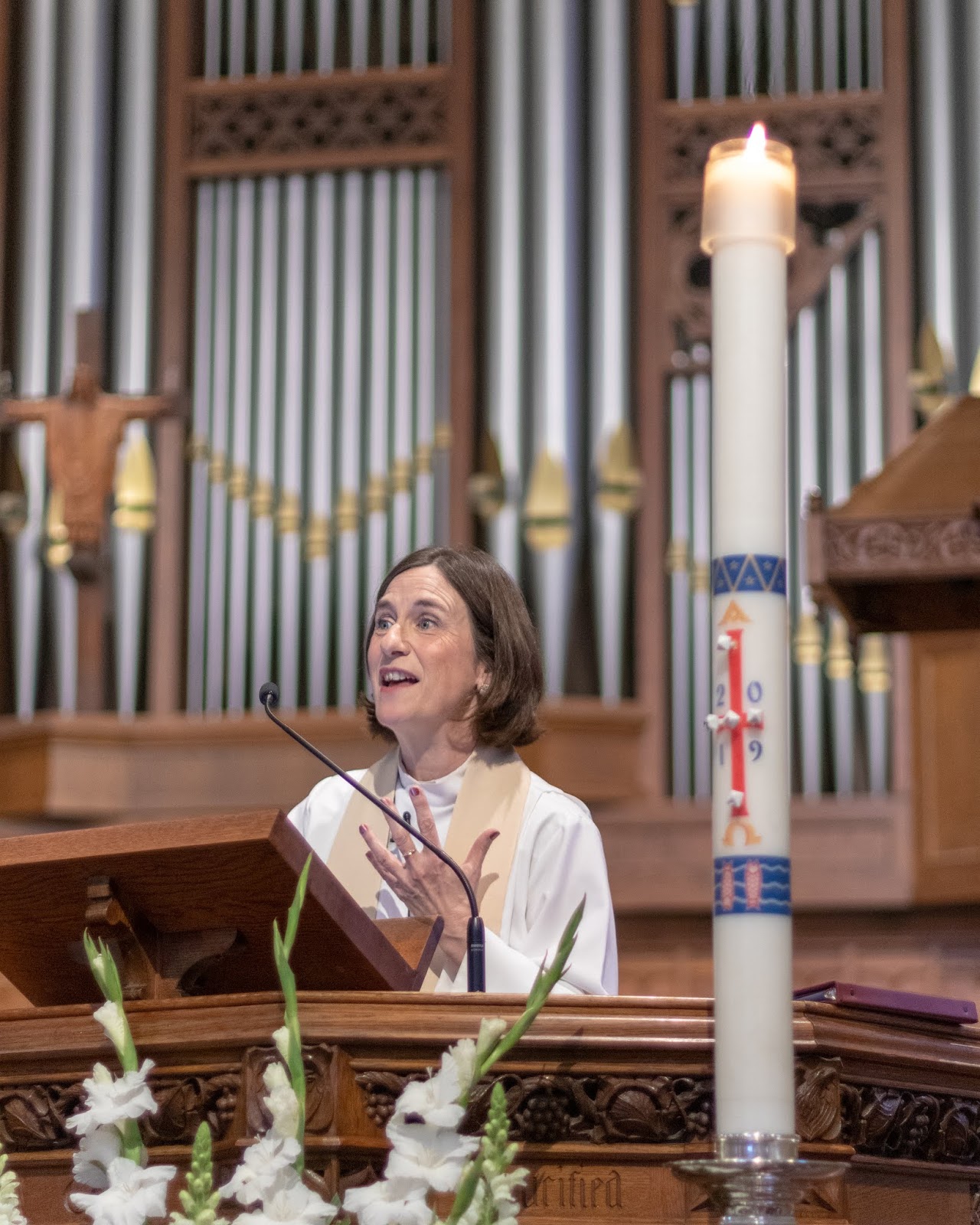 Alleluia, Christ is risen. The Lord is risen indeed, Alleluia!

The story of Holy Week is a journey from darkness to light. The fourth Gospel begins Easter Day in darkness, echoing the moment on Thursday when Judas left the community of disciples to betray Jesus and John writes, “it was night”. The night continued until this moment, the moment when Mary Magdalene arrives at the gravesite, expecting to prepare the body of Jesus for its permanent burial in the darkness of the earth. We know that dawn is breaking, for by the time the male disciples arrive to verify her story, they are able to see into the tomb.

As the light strengthens, so does the realization that something remarkable has occurred. But it is still a journey: Mary begins in despair, grief-stricken, resigned. She moves from horror to outrage – they have stolen the body! – and then to tearful bafflement, until at last she turns to the light and sees clearly that her Lord is risen, and now she is able to return to the men and give the first astonishing Easter announcement. Alleluia, Christ is risen!

In John’s Gospel Mary Magdalene appears for the first time at the scene of the Crucifixion, helping to support the heartbroken mother of Jesus. Now we see her continuing the role of a family member, coming to prepare the body for burial. Mary is deeply connected to both the disciples and the family of Jesus; her ministry is one of relationships. Contrast this with the behavior of the men, who compete to outrun and outdare each other, the later arrival taking the extra step into the tomb. Each is wrapped up in his own experience. They don’t confer or commiserate, they don’t comfort Mary, they don’t stay to figure out what has happened. They return to their own homes to process individually what they have seen.

But Mary’s instinct is to connect: she shares the news of the open tomb with the community: she sees and speaks with first the angels and then with Jesus himself. And when the reality of resurrection hits her, she must share that news too: she goes to where the other disciples are gathered and tells them everything. Mary models for us the ancient wisdom that the resurrection of Jesus isn’t an individual experience but a corporate one: it belongs to the whole community, for we are all raised with him.

We don’t hear anything more of Mary: she returns to invisibility after this moment. It’s regrettable that both Mary Magdalene’s leadership and her understanding of resurrection were airbrushed out of the picture as the church developed its structure and hierarchies. Women of a certain age are well accustomed to the phenomenon of becoming invisible, overlooked by everyone from restaurant servers to public health researchers. And, in a culture that values individual achievement above all else, it’s hardly surprising that a corporate understanding of resurrection is discarded in favor of a solitary search for truth and enlightenment, a self-focused spirituality that disregards the power and accountability of community.

One question is repeated in our Gospel story: woman, why are you weeping? Mary, the connector, weeps for all the broken connections in her world, and we may well weep with her for ours. Woman, why are you weeping? For the faithful who have seen their hopes dashed. For the betrayal by a trusted friend. For the self-interest that tramples down others in its climb to the top. For the many ways we nail Jesus to the cross of fear, greed, selfishness.

For the times we have failed to recognize Jesus in the stranger. For the fear that makes us turn away from the victims of violence and disaster. For the brotherhood that deserted Jesus in his last hours. For the continued trafficking of human beings. For the children taken from their parents and locked up in a strange land where nobody speaks their language. For the addicts who are enslaved by their habits. For those who are imprisoned within anger and hatred. For all those who are invisible or regarded as disposable or a burden. For those who have good news to share but cannot make themselves heard.

Woman, why are you weeping? Why would you not weep?

There’s a lot of movement in this story: running back and forth, coming and going, from the town to the tomb and back again, some six different trips. But when Mary becomes still, when the commotion subsides, she is finally able to see the risen Christ. As the light of day strengthens, so the spiritual light strengthens too, until Mary can both see and be seen by her beloved. She is not invisible to him: he calls her by name: he knows her.

To be known by God and to know God: this is what we seek. And it is in the quiet moment, when we allow ourselves to dwell in our unknowing, that we discover a Savior who knows us and loves us and who lives in and for us. Go and tell, Jesus says. Now that you know, go and share the good news with the community, for this is news that must be shared: a resurrection for the whole of God’s people, not for just a favored few. And so Mary does. Alleluia, Christ is risen!

Now that we have arrived at Easter, now that we have heard the good news, what’s next? What does Easter change for you and for me today? In a week when three world-venerated houses of worship suffered fires, when we remembered the 12th anniversary of the Virginia Tech shooting and the 20th of Columbine, and now this morning’s news of suicide bombings targeting Christians in Sri Lanka, there is plenty to grieve, if we stay at the tomb. But just as Mary turned from her grief to the living Christ, so we now turn from darkness to light, from death to life.

St Paul’s Cathedral is a community of life, a community of hope, founded upon the promise of life abundant for all. We follow the way of love, welcoming everyone in gratitude for the love we ourselves have experienced. In dying for us and rising from the grave, Jesus has defeated the power of death and has demonstrated that love always wins.

Jesus chose a woman, someone who didn’t count as a legal witness in her day, as the first apostle and proclaimer of the good news of resurrection. Just as the Virgin Mary carried the good news of Jesus in her womb, just as the unnamed woman at the well carried the good news back to her village, so Mary Magdalene became the apostle to the apostles, entrusted with this treasure as a sign that God fully values the people on the margins, the invisible people, the ones who don’t count in the world.

Each one of us carries good news within us to share and to celebrate. The heart of the Easter message is that you and I, all of us, no exceptions, are deeply, unconditionally, and eternally loved, and God invites us to live fully into that love, to go and tell the good news of life. “This is the Lord’s doing, and it is marvelous in our eyes.” (Psalm 118)

Alleluia, Christ is risen. The Lord is risen indeed, Alleluia!