Skip to content
Home > All Our Voices > Secret Santa Layaway 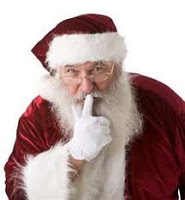 Editor’s note:  a Cathedral member who prefers to be anonymous sent us this blog for the Christmas season.  You may be sitting next to this Secret Santa on Sunday!

In the last year or two, there has been a spontaneous surge of people acting as “Secret Santas”   for folks who have Christmas gifts
on layaway.  These contributions
have ranged from a hundred dollars to thousands.

Now, economists will point out that layaway is not the best
way to buy things.  Many stores
charge a fee, so it makes more sense to save up and then buy all at once.  But for many folks living on limited
incomes, the small contributions to layaway make it  the most practical way to purchase, and in a sagging economy,
layaway schemes have made a big comeback .
Last Christmas, we were really inspired by stories of Secret
Santas.  We gathered $300 in cash
and set out, ending up in Chula Vista.  It was a week or so before Christmas, and we found that most toy
and department stores had already closed their layaway programs.  We went into the Sears store at Chula
Vista Center and found a clerk.  “Is
layaway still open?” we asked.  She
was a bit puzzled, but when we explained that we didn’t want to add anything,
but to pay for some, she said, intrigued, “oh, like on the news?” and she found
us a security manager to help.
He took us behind the scenes to a warehouse where large
plastic bags were shelved.  On each
was a typical department store receipt, indicating amount due.  We walked along the rows together
looking for bags with children’s clothes or toys.  As we found them, our new friend picked them up.  He was a big man, and easily tucked the bags under his arms.  He led us
back onto the floor where he found another clerk to process the payments.  As the clerk rang up each ticket, we
handed over the money to pay for it.  Some of them were recently past due.  The manager beamed, passing each ticket
over to the clerk and mentally tallying the amount.  Then we followed him back to his office where he piled up
the tickets to make calls to the families.  He knew some of the recipients, and knew it would be a big help.
“What are your names?”
he asked, but we declined.  “Just
tell them Merry Christmas,” we said.
He gave us a big hug, and a grin, and we headed out.  There’s a lot of need in the world, and
we didn’t make much of a dent.  But at least we made a few Christmas mornings a little happier–and put a lift to our step
too!
This year, we’re going to do it earlier.  We learned that some people who had things on layaway at other
stores but couldn’t make the final payment, lost those items.  This year, we want to make sure to help
those folks too, before they suffer default.  One person at a time DOES make a difference.  Merry Christmas!