Skip to content
Home > All Our Voices > Lighting up the Cathedral: reflections on December Nights

Last night my husband and I volunteered to help out with greeting visitors to the Cathedral who were drawn to it by the wonderful outdoor lighting display. It was beautiful and later when returning from Balboa Park for December Nights in the Prado, you could see them from the Cabrillo Bridge. We got back to the Cathedral about 9:45 and when we were about a block away, the lights were turned off. It might be better to leave them on for a little longer, since there were long lines of people waiting to get on the shuttle buses that were along Sixth Avenue and the Cathedral lights were within their vision. 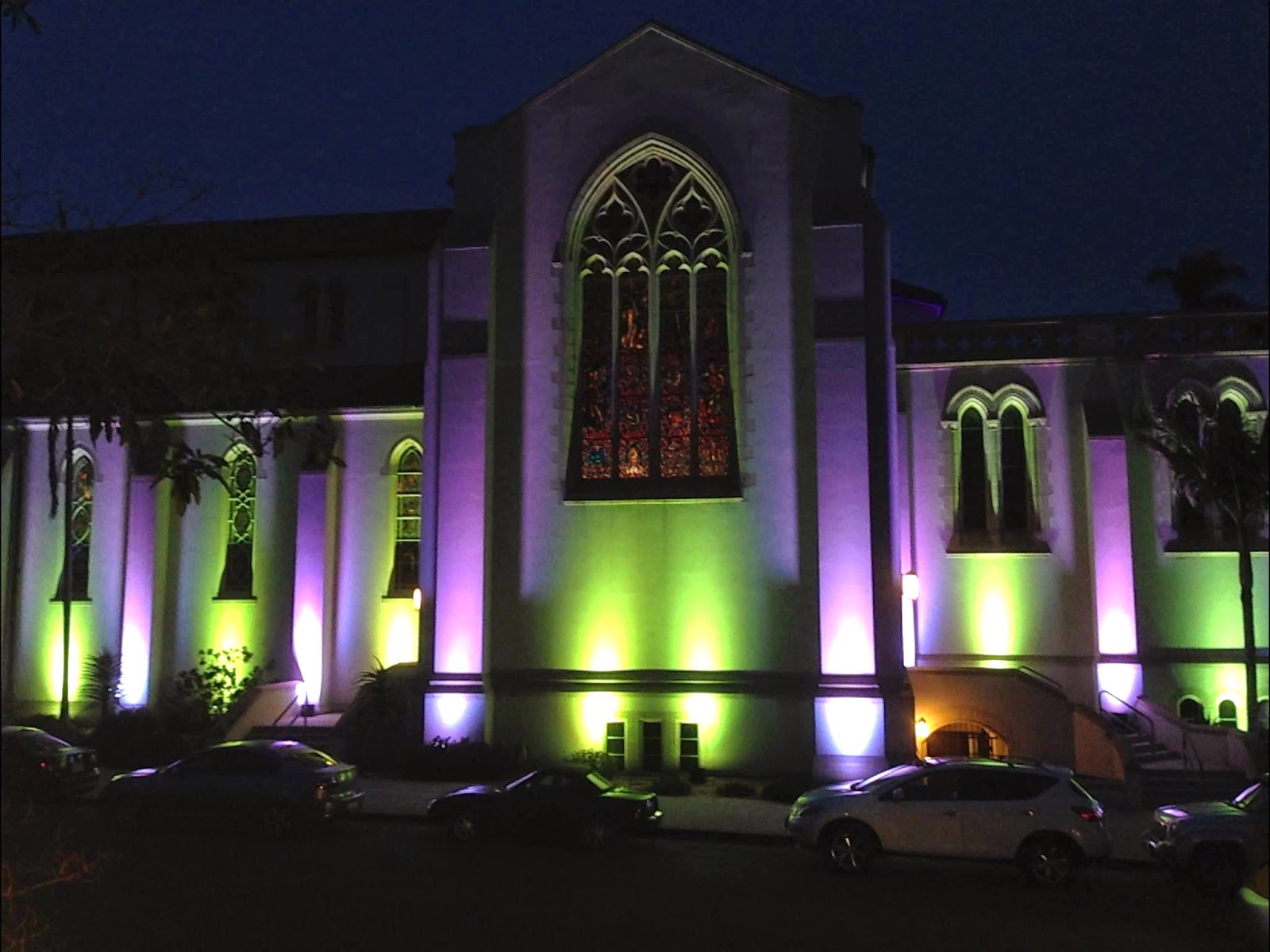 Last night turned out to be a more wonderful experience that I had predicted. My husband who was out on the Sixth Avenue side, met a Presbyterian minister who has just moved to San Diego with his young family and was hoping to meet other clergy in the area. My husband assured him that he would find that opportunity at St. Paul’s. I am sure each of us that volunteered have other special stories to share.

But what ended up being more special and I would call the whole evening an almost Hallmark TV movie experience, was the connections and experiences that happened not only at the Cathedral but in a jaunt over to Balboa park with a friend from church, her grandchildren, daughter and daughter’s boyfriend. Trying to move with the masses of people had an almost Del Mar Fair type of experience. We had not been to December Nights in many years and it has changed. There were members of some religious group that held up multiple yellow lighted signs with Biblical verses on each side. Some of the sign holders would start quoting the continuation of the Biblical passages. It was a little humorous but they were trying to remind people what this season was all about. There were many commercial stands and wonderful conversations with the small business owners. There were there food stands especially around the International Houses and meeting the many volunteers that were supporting their various countries was also great. there were the various music groups performing at the Organ Pavillion, including one group that was from the high school two of my children attended and were involved with. And then there was the lighting of some of the old iconic structures that make our park so special and related to what we were doing at the Cathedral.

But the Hallmark experience last night was the conversations with various people, the connections that were made and also to see the emotional healing of one family that was taking place. It truly made the congestion and time of year worth while because it was not just all commercialism; there was something else in the air. And seeing the Organ pavilion completely filled with people listening to music that was specially about Christmas and Jesus made you appreciate that many still recognize Christmas and Advent for what is and not have to be “politically correct”. Also, there were many people visiting the Nativity Creche that has been at the park since I was a young child (1950s) and I am sure many years before that. An atheist group has tried to shut it down several times, but as a Lutheran pastor, familiar to St. Paul’s once told me, if you don’t agree with something, then don’t go there. No one forces people to go to a far end out of the way part of the park and why should we fill forced to always accommodate those that don’t like it. If they don’t believe in something, then why do they get so upset about our belief in a deity they say doesn’t exist.

So thank you to Penny, Jonathan, the Cathedral staff and others who conceived this event and helped get the St. Paul’s lighting display done. Maybe we will get a large contributor or two that would enable us to own the display equipment so that it can happen regularly and not have to be rented. Just think of the wonderful possibilities and things that could happen. It is those people that we walk the path with and make connections with that make a difference.