Skip to content
Home > All Our Voices > It’s not about the obvious things: Reflections on “The Next Fall”

Recently, a Cathedral group sponsored by the Integrity Circle went to the play “Next Fall” by Geoffrey Nauffts at the Diversionary Theatre. Cathedral member Mark R. Turner shares his reflections.


We all bring our backgrounds to dialogue with a work of art. Our personal dialogues with paintings, films, and plays customizes the piece to our current position in growth. Sharing our personal dialogues with others can help in each others’ growth. So it is in my encounter with the play “Next Fall” by Geoffrey Nauffts, produced at Diversionary Theatre, James Vasquez directing. It may be helpful to hear some of my dialogue since I am a playwright and have an extensive background in the evangelical Christian world where some of the characters in the play have their roots.

My guess is that very few Evangelicals would dare show their faces at Diversionary Theatre due to its mission of representing gay issues, let alone admit they attended a production of “Next Fall”. And that is a big part of the meaning of the play, the phenomenon of people getting so focused on the given circumstances, the obvious, surface things, that they miss the deeper issues, the bigger picture. In this the play is addressing the sad polarization and exclusiveness tormenting our world.

This is a story of flawed people who encounter the Truth that, in the final analysis, despite disagreements, no, let’s be frank, gaping cultural divides, love is the lasting and most important thing in life. Nauffts creates a “what if” situation of great conflict when he puts gay men and fundamentalist-leaning Christians in the same room with life-and-death circumstances. He pushes it further when he puts gay and fundamentalist-leaning Christian in the same body. These, along with the hospital where a beloved person is hanging between life and death, and the flashbacks to relationship struggles between gay partners, are the given circumstances. But, try to get past all that. It is not about the obvious.

I’m not happy with the playwright choosing Christian characters who don’t know their theology and have pretty lame, simplistic responses about how they reconcile the apparent contradiction between the doctrine of sin and homosexuality. On the surface it appears this is Nauffts’ impression of “evangelical” Christians and it will make many an evangelical angry for being misrepresented. But, looking beyond the obvious, I find choosing characters like that keeps the story from being just about theology. Am I projecting my bias on the play when I say it is promoting the theme of “Love overcomes all” even bad theology? Is it a good effect for audience members to be, depending on their viewpoints, a little frustrated, or a little gleeful that the Christians aren’t giving better answers to a skeptic’s legitimate questions? Personally, I hate confirming the popular opinion of Christians which is expressed, though the critique is deserved by many individuals who live their faith on the surface level. I would have liked such views of Christianity to meet some verbal correction, but then it is not about the surface words. Too often people relate in word only. In theater this is anathema. The play must “show it” rather than “tell it” . Nauffts honors the fact that we are not attending a treatise, lecture or sermon. This reminds me that Christianity is not just to correctly verbalize theology, but to be and live faith and love. Flawed as we are, we can still seek to live love. 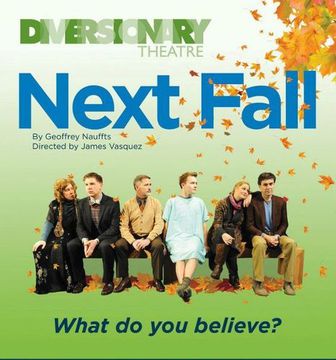 The main character is Adam (Matt McGrath) who is sabotaging himself through selfloathing, the feeling he is unworthy of success and a happy life. His hunches about why he is struggling involve efforts at worldly success: a good job, a good income, getting published, stuff that would make him look good in the eyes of others’ expectations. When Luke (Stewart Calhoun) comes into his life he is confronted with the whole “religious thing” which seems so second nature to Luke. As Adam says, he never really thought about the possibility of having “a soul”. He is forced to confront the possibility that, compared to Luke, he is adrift without the anchor of faith that Luke enjoys, which is hard considering his contempt for Christians. Again Nauffts pits love and hate at each other in Adam and Luke’s life together. Adam wants Luke to love him more than he loves God because he has not yet realized the deeper understanding of faith and spiritual (eternal) life. In his turn, Luke is not quite there either, having to pray after sex. Yet, the others testify that Luke’s defining characteristic is his love for life. As we observe Luke and Adam’s relationship, it becomes apparent that Luke, through his acceptance of ambiguity and of Adam’s skepticism, knows more about family than does Adam.

A big reason for Adam’s lack of understanding about family is that he was not given it as a child growing up. Even though Luke’s theology and up-bringing are flawed, somehow faith and love were transferred to him growing up. Now his divorced parents, Butch (John Whitley), the strict conservative, and Arlene (Shana Wride), the fragmented, drug dependent one, are present as family at his side as he is dying from a car accident. They still are at odds with each other but I got the sense that they really did care about each others’ welfare. They possessed some deep, unspoken assumptions that manifested in surface behaviors of caring. As a practicing Christian, I know those unspoken assumptions come from an on-going communion with God.

I did not miss the playwright’s intentions of the iconic names “Adam” and “Luke” (the third New Testament evangelist). Luke turns out to be a sort of Christ figure who becomes “one of us” (initiating the relationship with an uninterested Adam) and whose death becomes the way for Adam to break out of his personal prison. We are even given the lines by Brandon (Tony Houck), “He chose you!” repeated poignantly, echoing the scriptures about grace: “not that we chose/loved God but that he first loved us . . .” (I John 4:10)

The play is about the family component of extending grace to one another no matter how polarized we are. Nowhere in the story is this so powerfully shown than at the moment when Butch, unable to physically cope with grief for his son, collapses. Adam instinctively catches Butch in his arms and everyone freezes in the moment. The two polar opposites are in each others’ arms. When someone is in need and falling, you don’t stop and debate their politics, theology, or sexual orientation. You jump to their aid because there is a deeper life below our surface issues. So it must be between Evangelicals and the gay community, or between . . . you pick your own polar opposites.

What is “family”? Who is “family”? Adam is seeking family on the basis of surface “rights” to be admitted into Luke’s room, but he discovers it deeper. His expectations of everyone and himself argue that he is the last person who would be chosen to console Luke’s family. The world is unfair and those people who deny us entry into the hospital room are the cause of it. But grace is given in spite of the given circumstances. Brandon the curmudgeon, propels Adam into Luke’s room at the opportune time for a chance to be alone with Luke. Luke opens his eyes from a coma for a few seconds before dying and looks not at Butch, or Arlene, but at Adam, almost like a miracle of the crucified Christ looking down from the cross at you. Adam is in the right place where Luke would have been when his father collapses. Adam happens to be the one who answers Butch’s phone in his absence at the end of the play. On the other end is Luke’s precious younger brother who has heard nothing. Adam becomes the elder brother who must speak the terrible words and extend loving consolation. Mirroring the Christian Truth of being Christlike, he is entering Luke’s place in the family because family is being present for each other and extending unmerited love — grace.

No, neither this play, or life, is just about sex, politics, theology, or other precious surface things, but it’s about the spiritual life beyond these. We are called to go beyond the obvious, the opposing belief systems, the overemphasis of the sensual, and deal with our souls. That is where true family comes from and that is why the Bible speaks so much in the metaphor of family. The surface issues have their importance, but struggling over them is endless and ultimately unfulfilling. The human is a spiritual being and until he, or she experiences life on that deeper/higher level they will suffer an incompleteness, a frustration, a sense of futility in life. We have been given some direction and hope in Nauffts’ play that in Adam’s discovery we can see our own.