Skip to content
Home > All Our Voices > Chapter Nominees

The Chapter Nominating Committee is pleased to announce this year’s slate of candidates for election to the Cathedral Chapter. The election will be held at the Annual Meeting on January 28. The four candidates, each of whom is standing for a three-year term of office, are: Jim Greer, Clemente Guarneros, Elizabeth Fitzsimons, and Gerald Motto. Read on to get to know our candidates.

Elizabeth Fitzsimons has been a member of St. Paul’s since 2011, when she and her husband Tony Manolatos attended the Rev. Allisyn Thomas’s “What is an Episcopalian?” course. That year, Elizabeth was confirmed by Bishop James Mathes during the Easter Vigil. In service to the Cathedral, Elizabeth has volunteered as a greeter and with Women Together. Elizabeth and Tony’s children – twin sons Alexander and Nicholas and daughter Natalie – attend Godly Play and Cathedral Youth. Natalie frequently serves as an Acolyte. The children were baptized by the Rev. Laurel Mathewson in 2013.


Elizabeth is Vice President at the San Diego Regional Chamber, where she leads the Chamber’s marketing communications and events, and the leadership development programs offered by the Chamber’s affiliate, LEAD San Diego. Previously, Elizabeth was Senior Director of Marketing & Communications at Rady Children’s Hospital. Prior to Rady Children’s, Elizabeth worked at the County of San Diego in media and public relations and internal communications. She began her career as a journalist at The San Diego Union-Tribune.
Elizabeth serves on the Board of Directors for the Jacobs & Cushman San Diego Food Bank, where she chairs the Development Committee. She also serves on the Board of Library Commissioners for the City of San Diego, and volunteers with Moms Demand Action for Gun Sense in America.


Elizabeth is a 2013 graduate of LEAD San Diego’s IMPACT program. She earned a bachelor’s degree in political science and Spanish from the University of Wisconsin and a master’s degree in journalism and public affairs from American University in Washington, D.C.


She and her family live in Del Cerro with their dog, Lucy, who has also been blessed at St. Paul’s. 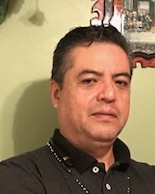 I am originally from Mexico City. I have been living in San Diego for the past 25 years. I am married and a father to 4 children. I am a professional embroidery graphic designer for several embroidery local companies and my own. My skills as a savvy embroidery designer have earned me a great reputation as a consultant, innovator, and go-to guy to get the job done. When I am not glued to the computer screen, I love spending time and taking care of my family, learning new graphic design skills, and assisting our church with care and devotion. I am currently working on starting a company and creating my own signature clothing line. A biblical passage that I keep closest to my heart is “Si Dios esta conmigo quien contra mi? – Romanos 8:13. I enjoy meeting and talking to people. If you see me around please stop and say hi. I would like to get to know you. I live on Delta street in San Diego, my email address is guarneroscl@hotmail.com.


I was born an Episcopalian, grew up in Orange County and was educated in public schools in Southern California. On graduation from college, I moved to NYC to begin my career and lived and worked there for 32 years, less a 2.5 year break for military service. My late partner and I moved to San Diego 22 years ago and I’ve been an active member of St Paul’s since then.


I’m a former St Paul’s Chapter member and former Dean’s Warden. For many years I have served on various committees, been a Cathedral visitor, and participated in the small group Bible study. I’m an annual pledger and frequent contributor to various special fund raising efforts. I’ve served on the Executive Council of the San Diego Diocese and have been a deputy to a General Convention. I was previously active in parish and diocesan affairs in New York City where I served on vestries, chaired various parish and diocesan committees, attended, as deputy/delegate several diocesan conventions.
I have been involved in organizational work and leadership roles for most of my life and therefore have a good working knowledge of organizational dynamics including leadership, motivation, fund raising, goal setting/problem solving, and I have a non-professional’s understanding of the significant legal, accounting and tax procedures and issues of 501c (3) entities.


I’m a Realtor by trade and in that capacity I have represented SPC and the diocese in both the purchase and sale of various properties. Additionally, have been engaged to represent several SPC and diocesan individuals in their personal property transactions.


Jerry was born in New Orleans, Louisiana to an Italian father and a French mother. He attended Catholic School for grades 1 through 9 and then attended public high school. He holds a BA degree from Southeaster Louisiana University. Jerry also holds a Masters in Education in School Administration from Azusa Pacific University. He taught middle school for 24 years and served one year as a Vice Principal.  He was an ordained minister for 10 years in the Universal Fellowship of Metropolitan Community Churches. He served as a pastor in Cincinnati, OH; New Orleans, LA; and Riverside, CA. During these years, he was a passionate advocate for gay rights and had a ministry serving those with AIDS.


In 1987, Jerry joined St. Peter’s Episcopal Church in Colton, CA. He served on the Vestry and was an Acolyte. When he moved to Moreno Valley, CA in 1991, he transferred to St. George’s Episcopal Church in Riverside, CA. There he served on the Vestry for two terms. He was elected junior Warden for two years and appointed Senior Warden for one year. He also served as Assistant Treasurer and Building and Grounds Coordinator. He was an acolyte, Eucharist Minister, lector and served on several committees.


In February 2011, Jerry moved to San Diego and transferred his membership to St. Paul’s Cathedral. Since he has been here, he has served on the Greeter, Stewardship, Cathedral for the City committees. He also has been an acolyte, a lector, and a counter. For several years, he was the liaison for Refugee Net and coordinated the St. Paul’s shoe drive. He also coordinated the Cathedral’s booth at the Gay Pride Festival in 2016.


The sermons and music at St. Paul’s feed Jerry emotionally and spiritually. Most important of all are the loving and caring people here. Since many of his friends and family have died, the members of St. Paul’s have become his extended family. He and his husband, Jim, have been together for 40 years. St. Paul’s is one of the most important things in Jerry’s life. He considers it an honor and a privilege to be asked to serve on the Chapter. With God’s help, he will do his best to serve the members of St. Paul’s with grace and dignity.