Skip to content
Home > All Our Voices > To Kill a Mockingbird: putting it together 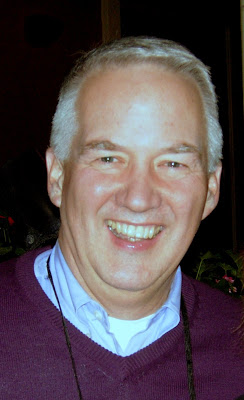 Last week, nearly 300 people crowded into the chancel area of the cathedral (where the priests usually sit during worship) to view a production of Christopher Sergel’s dramatic adaptation of Harper Lee’s novel, To Kill a Mockingbird. Many commented that they enjoyed the show and wondered how we managed to produce it. So, I thought that I’d tell you.

The story was selected by Canon for the Arts (and producer of the production) Richard Lief and approved by the Cathedral’s Arts Committee last summer. As director, I picked the Sergel version to stage from a couple of different adaptations that were available. Canon Lief and the Arts Committee scheduled the performances, and we secured rights to present the show on those dates.

We started casting in the fall, and Canon Lief and I brainstormed about who would be good for each of the 20 or so roles in the script. For the adults, I started with those who had appeared in the Cathedral’s last two productions (Our Town and Miss Witherspoon), as well as Cathedral members who had indicated in the past that they were interested in participating in the theatre production. Several of the key characters were cast this way: David Reicks, who played Atticus, had appeared in Miss Witherspoon, as had Steve Heyl, who played Bob Ewell, and Shin Evans, who played Boo Radley. Melinda Oslie (Miss Maudie) Margie Joy Oslie (Mayella Ewell), Helen Wagner (Miss Stephanie), and Camille Davidson-Davisté (Calpurnia) appeared in both Miss Witherspoon and Our Town, and Canon Dorothy Curry (Mrs. Dubose) and Maureen Steiner-Davisté (Court Clerk) had appeared in Our Town. George Coulson (Rev. Sykes), Guillermo Menéndez (Tom Robinson), Robert Heylmun (Judge Taylor), and Michael Evans (Sheriff Heck Tate) had been part of other St. Paul’s arts projects.

Once we had cast everyone we could from those groups, I sought out other Cathedral members to play the remaining roles. The whole process took a while. Many I asked said yes right away, but some said no and others were hesitant. Eventually, we had a full cast, but I recruited a couple of understudies “just in case,” and one of the understudies ended up stepping into a role when the cast member who agreed to play that role had a schedule conflict and needed to withdraw. We were fortunate to have “newbies” Canon Chris Harris and Robert Black play Mr. Gilmer and Walter Cunningham, respectively.

We held auditions for the three key roles played by young people: Scout, Jem and Dill. To work with the young cast, Canon Lief and I recruited Elizabeth Keith to co-direct. Elizabeth had worked with the young cast in Our Town, and she played the title role in Miss Witherspoon in 2009. Canon Lief recruited a number of young people from local theatre programs to audition, and Elizabeth and I decided to double cast some of the roles. We cast Cathedral chorister Spike Sommers as Jem, and we cast Kayla Cruise to play Scout on Wednesday and Friday evenings, while Jacqueline Workman-Dicks would play Scout on Thursday. Max Oilman-Williams played Dill on Wednesday and Friday, while Liam Gaarder-Feingold played Dill on Thursday and understudied Jem. 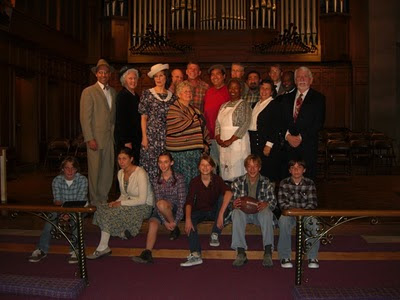 We had a read-through in December and then started rehearsals in earnest in February. Because of everyone’s busy schedules, we could only rehearse on Sunday evenings between 6 and 8. Elizabeth worked with the young cast and Atticus for the first few weeks, while I held character conferences with the adult cast. We started blocking the cast’s stage positions and movements in March, took off Easter Sunday, and then ran through first Act 1 and then Act 2. Starting Sunday of production week, we ran the entire show each night.

St. Paul’s doesn’t have a good space in which to stage theatre, unfortunately (NOTE TO THE CHAPTER: I can think of lots of ways to use a 99-seat “black box” space in the Cathedral’s master plan, including having a comfortable location for Sunday adult forums and weeknight classes). The chancel of the Cathedral is the best of a bad lot, but it has lighting problems (it’s lit for the congregation to see worship, which leaves the main “stage” space as the darkest area while much of the light shines in the eyes of the audience—also, there’s no way to dim the lights to create stage effects). The space also has significant acoustical issues (singing sounds great, but speech gets lost). Even turning actors sideways tends to create sound problems, and I’d tell the cast, “If you’re moving and you can see the nave of the Cathedral you shouldn’t be trying to speak your lines until you can see the audience again.”

With a cast of 20 and no real backstage area (we hid cast members behind the pillars on either side of the chancel for Atticus to change costume and for the “attack” scene), we had to think of clever ways to shoehorn people into the set. Mostly, we kept the entire cast in view of the audience, ready to walk into the scene quickly. In fact, I joked that we were doing “just in time” staging. And, though we had worked in the chancel since March, we couldn’t set the stage as it would be for the show until Sunday, April 25, three days before opening night. While you were having high tea after the St. George’s Day Evensong, the Mockingbird cast was busy removing and storing choir stalls and setting up folding chairs before running the entire play for the first time.

Sunday was a long and stressful day, and the collective energy lagged at the Monday run-through. Tuesday, we took a moderate jump in quality, but it looked as though we would have a nail-biter opening. Our stellar cast dug in on Wednesday, however, and suddenly (perhaps with the intervention of a power greater than ourselves) the show coalesced and we were delighting the first of three sold-out houses. And, the performances just kept getting better as the three-night run progressed.

One of the lessons of To Kill a Mockingbird is that ordinary people can step out of their everyday roles, do something heroic, and then resume their lives again as if nothing happened. Our cast was a living example of that lesson. Time and again, individual cast members stepped forward to help or took in what was going on at rehearsal, went away, and came back the next time with a much more fully developed performance. No one asked for or wanted credit for doing this extra work—they just did it. So, if you see some of these extraordinary people at church, thank them for the time and energy they spent bringing this wonderful story to life.

1 thought on “To Kill a Mockingbird: putting it together”