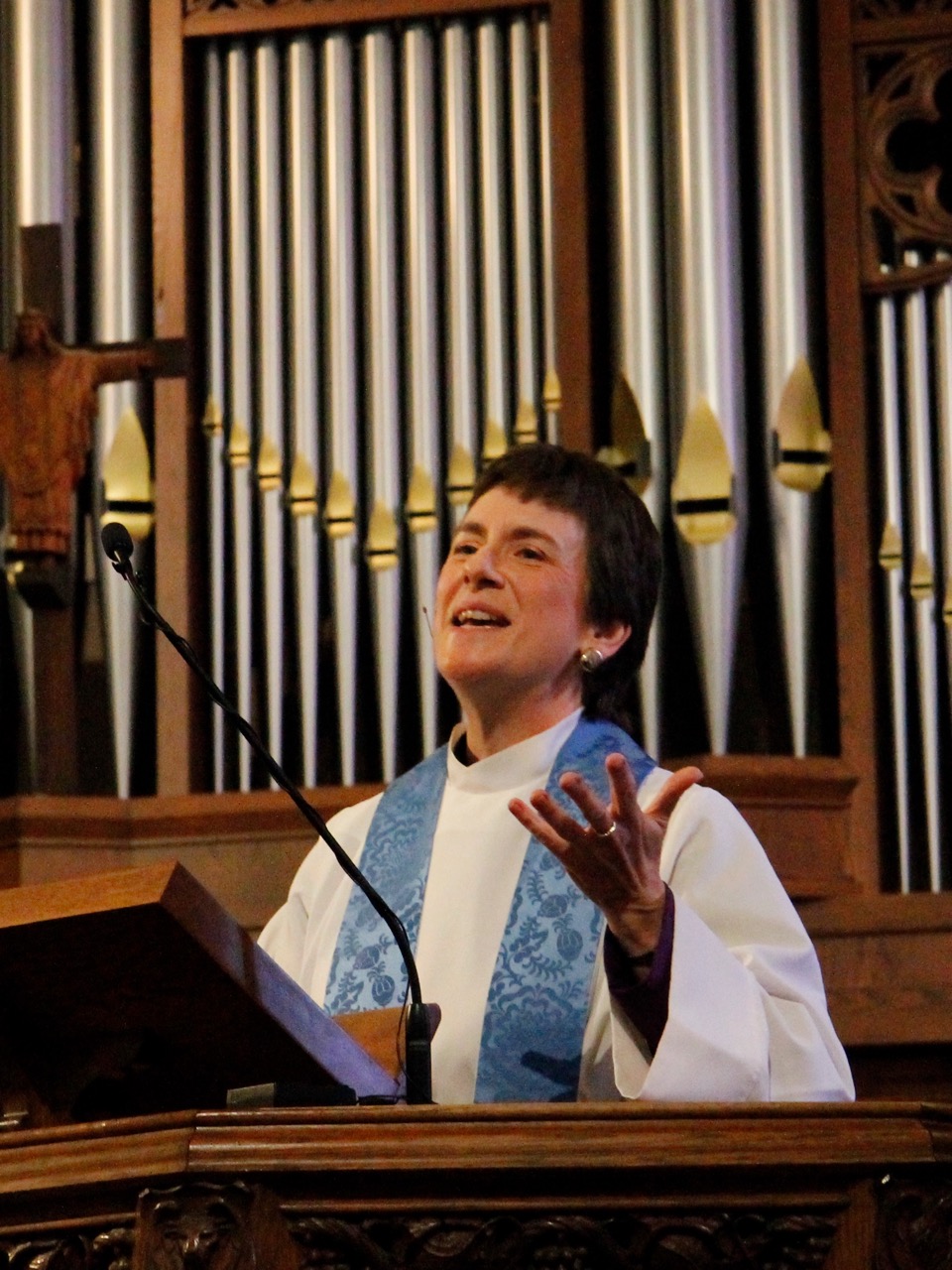 Every year I look forward to the Sundays in Advent when we are confronted by John the Baptist, the wild man of the New Testament. There’s something refreshingly unvarnished about John, with his camel-skin coat and his tent-revival preaching. Of all the Gospel writers, Luke tells us the most about John, filling in the miraculous story of his birth to elderly parents and his dedication to the Lord’s service. Now Luke introduces the adult John, a prophet in the grand Hebrew tradition, one who lives outside of the community, who refuses to adopt social norms, who speaks truth to power, and who dares to stand against the comfortable religious and political structures of his time.

Luke carefully sets John within a real-world context, naming those in power, whether at a global, national, local or religious level. Make no mistake, Luke is saying, John is speaking God’s word to this emperor, to this governor, to the mayor, the bishop, and the city council. God has something to say to the world of politics, the world of wealth and influence, the world of the powerful. And yet John is raised up from within an oppressed people, a people who have been brutalized and silenced by the powers that be, a people who have no status in the world and who seek comfort and affirmation from a faith that stands in opposition to the imperial cult. It’s not hard to draw parallels between John and the prophets of more modern times: Sojourner Truth, Dr King, and Mahatma Gandhi, to name but a few.

John speaks in the prophetic style, calling a nation to repentance, drawing on earlier prophets to revive a vison for God’s people, calling his people back to God’s ways, God’s values, God’s justice. A baptism of repentance for the forgiveness of sins. John speaks also to us in our time. What sins do we need to repent as we hear John’s words afresh? What national tide needs to turn in the world we inhabit in this Advent season?

There is no avoiding it; we must go to San Bernardino. We must go to Colorado Springs. We must go to Charleston. We must go to Chicago and Philadelphia and St Louis. We must turn our reluctant thoughts to the crisis of violence that besets America, and we must ask what John the Baptist would say in response to this real-world context. What would Isaiah say, what would Amos and Hosea and Malachi say?

What would they say about a nation where there are more mass shootings than days in the year?
Where gun homicides per million people are four times higher than the next highest developed country?

Where there are almost twice as many guns per capita as Yemen, a country in the midst of a civil war?

Where 33,000 citizens are killed annually by firearms, more than the combined total of those who die from AIDs, illegal drug overdoses, overseas wars and terrorism, and yet the government refuses to fund research into gun violence as a public health hazard?

It’s not hard to imagine a 21st century John the Baptist proclaiming a baptism of repentance for the forgiveness of our societal sins. And that proclamation is the responsibility of all people of faith today.

The prophet dares to name what we all see but pretend not to: that life is unfair, that children die unnecessarily, that money buys votes, that the planet is gravely sick. The prophet names the monster under the bed and the skeleton in the closet. The prophet holds up a mirror and shows us how far we are from the Kingdom of God.

But the prophet doesn’t stop there. The prophet’s job is to name reality, however unpleasant, and then to offer an alternative reality. To describe the world as it is and then to describe how the world might be. To paint a picture of rough places made smooth, of mountains lowered and valleys raised so that all people have equal opportunity to thrive in safety, rather than some living in luxury while others have to choose between food or rent, or fall ever deeper into debt because two full-time minimum wage jobs aren’t enough to keep a family off the streets.

The prophet shows us a vision of how we might live, of a world where every child is safe, where all are treated with dignity, where everyone has enough. Our 21st century John the Baptist might mention universal health care, affordable housing, the elimination of disease. He might mention a Congress that could practice collaboration rather than confrontation. The crooked shall be made straight, indeed. And the prophet always proclaims the promise: all flesh shall see the salvation of God. All flesh. Nobody left out. Nobody forgotten. Nobody deemed unworthy. That’s the promise we live for, the promise we proclaim, the promise we must strive to make real.

But there is a gap, a gulf, an abyss, between the reality that we know now and the reality of the promise fulfilled. We live in the tension of that gap. We live in a world where we know what could be, and we long for it, but we seemingly cannot find the way through the wilderness to it.

Advent is a season of hopeful expectation: the Kingdom seems a little closer as we anticipate the Nativity. And yet, there’s always that gap, and that makes Advent a season of yearning. There is lamentation to be done and injustice to be fought and resistance to be overcome before we can find our way to the fullness of the Kingdom where we yearn to abide.

The African-American community knows a thing or two about yearning. In the days of slavery they developed a way of expressing their yearning in song, a way that subversively kept their hopes and dreams alive however stony the road, however dry the wilderness. The spiritual and then the protest song of the civil rights movement gave voice to the yearning of God’s people for the coming of Jesus in his glory and the setting right of all the world’s wrongs. I imagine we all know the great song We shall Overcome. Like me, you have probably sung it arm in arm with friends and colleagues at protests and prayer meetings over the years.

In some Episcopal churches this song has been adopted into the liturgy, to give voice to our shared yearning for Jesus to come into our world, to exalt the valleys and make low the mountains, to make the rough places smooth and reveal God’s glory to all flesh. In those churches they have taken the memorial acclamation from the Eucharistic Prayer – Christ has died, Christ is risen, Christ will come again – and they have blended it with the song so that, in the prophetic traditon, it perfectly expresses our Advent yearning. Imagine the whole congregation singing this:

(Sung to the tune of We Shall Overcome)

Come, Lord Jesus. Come, accept our repentance, renew our hope, and grant us your salvation.