Skip to content
Home > News > The Sunday Sermon: The Power of Love 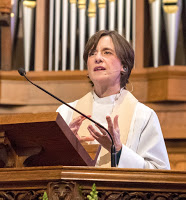 I´ve been thinking about power this week. In our Gospel reading, Jesus horrifies his friends by saying that he´s going to be arrested, tortured, and killed. This sounds like loser talk to the disciples, and Peter takes him to task. What kind of Messiah is he, if he´s giving up so easily? Of course, Peter and the others have no idea what kind of Messiah Jesus is. They are stuck in the human power dynamic: the Messiah will conquer by force and drive the Romans out of Israel, they think. Jesus has a tough job on his hands convincing them that there is another way, and in fact, in Mark´s Gospel, he never does make them understand. The idea that power and force are the same thing is deeply engrained in human beings, then and now. But God´s power is different from human power.

Abram and Sarai were obedient to God´s call, they believed the promise that God would give them descendants as numerous as the stars in the sky, but they were powerless against the curse of childlessness until God´s good time, which came well after they had given up hope of ever having a child, when, as St Paul puts it, they were as good as dead. God´s power is different from human power.

On Ash Wednesday we once again witnessed the power of violence to kill and destroy, in the shooting at Stoneman Douglas High School in Parkland, Florida. The lost child who took up weapons of war and massacred his former classmates and teachers put his trust in the most destructive kind of power, breaking our hearts yet again. But almost immediately we started to hear stories of the students and teachers who put themselves between the gun and their friends, saving lives while giving up their own. The power of such sacrifice will carry their devastated families through this terrible time, and they will not be forgotten.

I read a story this week of an elementary school teacher who interrupts cruel classroom power dynamics by paying close attention to the children who don´t have friends, who are never picked for a team. She carefully draws those children into the circle, letting them know that they are precious, they are valued. She is saving lives with this gentle power of love and encouragement.

Closer to home, also on Ash Wednesday, scores of our own cathedral folks spread out across this city and offered Ashes to Go, a moment of prayer and connection for strangers on the street, from the most down and out homeless persons to senior officials in city government. There are no power politics in the liturgy of the ashes. We are all made of the same dust and all equally worthy of God´s love. We reached over 1000 people with this ministry and we witnessed the power of communion through the smiles, the tears, and the pain people shared with us.

What about the corridors of worldly power? On the whole, our elected officials have not behaved impressively since the shooting in Parkland. We have heard accusations from some that the outraged and bereaved students who spoke up in protest were paid actors spreading fake news. We have observed others playing golf while people buried their children a few miles away. We have seen the power of the gun lobby which holds many politicians in thrall, to the point that their own freedom of speech is compromised by their craving for the power that money in the bank will buy them. Think of the US senator who could not – could not – honestly answer the question posed to him by a Stoneman Douglas High School junior: will you refuse to take donations from the National Rifle Association? How sad is that, that a man with such power to make a difference has been literally silenced by the power of violence.

And all the time we are raging and grieving and arguing about the causes of gun violence and mass murder, the Cross of Jesus stands in the background, a silent witness to the power of sacrificial love.

Each time one of these tragedies happens there is a flurry of activity, of calls for change, of marches and protests and laments. But then all the fuss dies down, and nothing changes.

It seems that we can only look at suffering for so long and then we have to turn our eyes away and retreat back into denial. Nothing we can do … maybe it won´t happen again … somebody else´s child, somebody else´s problem. Just like Peter, we don´t want to face the reality of suffering. We are unable to stay focused on the source of our pain.

The attendance numbers of Good Friday versus Easter Sunday say it all.

One of the biggest conflicts I experienced in my last parish was over the gift by parishioners of a new processional cross. It was a crucifix, with a rather lifelike depiction of the wounds of Christ. The church was extremely plain, and you had to look hard to see a cross in there at all most of the time. This crucifix was a startling departure, and people hated it. The givers had to take the gift back, because the people didn´t want to look at a suffering Jesus.

I´ve heard people say that maybe things will be different this time. Maybe the young people, who have witnessed the horrors of seeing their friends and teachers killed, will lead the rest of us to a new way. Maybe this time the young people will shame us all into not averting our eyes; maybe we will find the grace and courage to keep on holding up the names and faces of the dead, will be persistent and annoying and disruptive until something does change.

Lent is the time to turn our attention to the Cross, to dwell on the love that suffers for others, to stay focused on the suffering of the world. This is the season to open our ears and our hearts to the pain around us, to allow the injustice and the grief we see ignite an energy that will drive us to keep working for the transformation of the world, even if we won´t see it in our lifetime.

As Abram and Sarai discovered, God´s promises are not fulfilled on our timeline. Think of the LGBT activists who died without seeing marriage equality, or the abolitionists who didn´t see the end of slavery. Their efforts mattered, and the promise eventually came to be.

It may take a lifetime for the prevailing motivation in Congress to change from campaign funding to actual public service. It may take the current generation of teenagers growing up and coming into their own as community leaders. Our part in the transformation of the world may be simply to encourage, to befriend, to guide our young people into the ways of peace and to vote out the corrupt and power-hungry. That would be a job worth doing.

We are not good at looking at the Cross. We are more likely to be with Peter in denial than to stand up and proclaim our allegiance to one who taught us a different way, a way that is just as unacceptable in today´s world as it was 2000 years ago, a way based on self-giving love.

Lent is a good time to think about this unacceptable Messiah that the Gospel shows us, a time to reflect on who Jesus is for each of us and how the reality of the cross changes our lives.
Maybe this time it will be different. Maybe this time we will step forward, refusing to look away, our faces and our lives steadfastly turned towards the Cross, the place where Love claims victory and God´s power triumphs.