Skip to content
Home > News > The Sunday Sermon: How we see 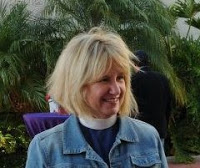 “It is only with the heart that one can see rightly; what is essential is invisible to the eye.”― Antoine de Saint-Exupéry, The Little Prince

The Gospel reading this week gives us a wonderful contrast between what it means to look at something versus really seeing it.

Jesus’ disciples, who by now have traveled with him for some time and have witnessed and looked at, multiple healings, been a party to Jesus’ teachings, and theoretically been in a place to take in and absorb at least some of the mystery of Jesus—his compassion, physicality and deep, abiding connection with God, his Abba, still don’t seem to understand what he is about.

When Bartimaeus, the blind man, tries to get near Jesus, he is sternly ordered to be silent by those who supposedly should know better.

But Bartimaeus on the other hand, does appears to actually sees Jesus for who he is—the Son of David (in fact he is the first to identify him as such), the man who has the power the heal him, to restore his eyesight.  In fact, Bartimaeus is so sure of this, he will not be silent and even throws off his cloak, probably the one thing he owns of any earthly value and impossible to replace,  in order to reach Jesus.   It’s that important to him.

And for his faith—his ability to see, his eyesight is restored.
Now clearly this story begs the question: who’s really blind here? Bartimaeus who couldn’t see Jesus out of his eyes, or those who had followed Jesus, some for years, who couldn’t see him with their hearts.  And the resolution of the story answers the question pretty resoundingly.

But perhaps that’s not necessarily the question being raised here.  Perhaps the even more basic question is how the disciples could have been so blind.  Think about it, they had extraordinary access to Jesus—access we can only dream about.

But that kind of access can also sometimes breed a type of familiarity which lulls us into thinking we see, and hence know, more than we really do.  We stop checking out our assumptions about situations and people and not see the truth underlying any given set of facts.

So for those of us who profess to follow Jesus, we should pay attention to their blindness, because it is a warning to us all.

In his book, Earthly Wisdom, Tex Sample, a writer, lecturer, and preacher, talks about how as a young man just out of high school he got a job on a pipe-pulling crew for a seismography company in Mississippi.  Jim, one of the men Tex worked with, knew a whole lot more about the work than Tex did, but because Jim was poor, illiterate, and black, and Tex was headed for college, and more importantly, white, Tex was made the boss and Jim, the worker.

Regardless of the titles however, it was hard, physical labor done in the midst of a hot, humid Mississippi summer.

One morning Tex and Jim arrived at the station to pick up the truck they drove and discovered someone had stolen the water can they used to hold their drinking water from the truck.  Nonetheless, Tex made what he called an “executive decision,” to go ahead and head off as there would no doubt be stores along the way they could get water and cold drinks.

Jim, however, went and found an old rusty syrup can and filled it with tap water.  There was rust and oil floating on the top of the water and Tex just looked at it wondering how Jim could even think of drinking it.

They went about their work in the hot, blazing sun and before it even reached noon, Tex knew if he didn’t have something to drink soon he was in serious danger of getting heatstroke—and there wasn’t a store in sight.  He writes:

I had to have water, but I was a white boy who had never
knowingly drunk from the same glass or anything else with
a black person. My own racism was actively at work in my head
but I needed water more than I needed prejudicial prohibit-
tions.

With that he handed me the syrup can . . . My hands were
trembling from dehydration and overexertion as I took the
can, and when I looked into the bottom of it, it had rust
flakes and a heavier film.  But it looked like the finest
vessel of water I had ever seen. I drank . . .

As I drank, it hit me. “This is the cup of salvation given for
you” . . . In my stark need Jim became a priest to me, and I felt
that I was being given life, and in a very literal sense I was.
That syrup can became a chalice, and that hot water,
permeated with rust, compromised with grit and topped
with a greasy-looking film the blood of Christ.

Tex thought he knew more than this supposedly “ignorant” black man, but that black man lead him to discover the truth of his own elitism, racism, and ultimately an understanding of how this holy mystery we call the Eucharist leads us to new life with Jesus.  And how Jesus comes to us in many guises.

In reading the rest of Mark’s Gospel, it doesn’t appear Jesus’ disciples had any such an epiphany immediately following the healing of Bartimaeus. They still had much ground to cover before they understood the nature of their own blindness, what they were looking at versus what they were really seeing; to let go of what they believed to be true about Jesus, and instead began to understand the truth of Jesus.

But once they did, they fanned out and told the story of Jesus to anyone they could and we are here today in no small part because of them.   They are to use the word from our Stewardship campaign, cornerstones for us.

We are all blinded by, among other things, our assumptions, views of the world, our opinions or even fears of what is possible with God, who and what can teach us about God, and perhaps even our comfort with the way things are.

But what is being shown to us here is that we don’t have to remain that way.  We can follow the example of Bartimaeus and call upon Jesus, not let others deter us, ask him to help us see, and then follow him.  And our sight, the ability to see God’s hand at work—in what is, what will be, what can be, what should be—will be restored.

It is no doubt something we will have to do time and time again, all the days of our lives.  But the good news is when we do so, by the grace of God, we will be able to find the sacred in all things, even living water in an old rusty can.