Skip to content
Home > News > The Sunday Sermon: How Many Times should I Forgive? 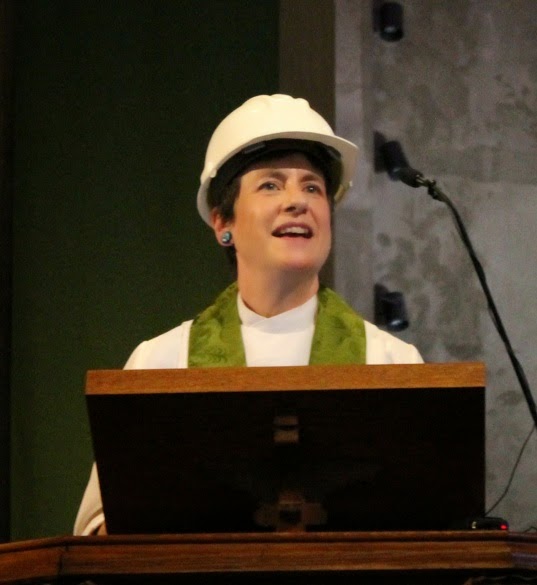 Annie Dillard describes church as a dangerous place, a place where we should wear hard hats and lash ourselves to the pews lest God’s power should sweep us away and turn our worlds upside down. When we read something like this passage from Matthew’s Gospel, I start looking for my hard hat. As it happens, I am covered in that regard: thanks to the legacy of John Chane, a hard hat is now standard equipment in the Dean’s office.

Why would I need a hard hat today? The Gospel passage we just heard provides a powerful illustration for why we should never consider Scripture passages in isolation. Jesus’s parable about the unforgiving slave is startling. It uses extreme language. It portrays God as an arbitrary tyrant, willing one moment to forgive unimaginably huge debts and the next to inflict torture on his subjects. And it places an extraordinary burden on God’s faithful people. A little perspective is needed here.

If you remember, last week we heard another passage from chapter 18 of Matthew: in fact, we heard the verses that come immediately before these ones. Chapter 18 as a whole comprises something scholars have named the Community Discourse, one of five sets of teachings ascribed to Jesus in this Gospel. The Community Discourse is designed as one unit: it’s like the outline for one class in a semester-long course. This class’s topic is the policies and procedures for behavior in a Christian community. It’s pretty clear that Professor Matthew has organized his material in this way so that his students, his church members, will know which scroll to pull off the shelf when they are faced with a question of relationships within the congregation.

Last week’s Gospel passage laid out a procedure for addressing someone who had offended against a fellow church member. Today follows up on that teaching with a question-and-answer session, and an illustrating parable that is deliberately hyperbolic, to make the point crystal clear. And it’s all in the context of a particular question within the church: when I address a conflict with a fellow Christian; how hard do I have to work at forgiveness?

Peter gets to be the class plant who sets up the teachable moment. He attempts to quantify the task of forgiveness. Seven seems like a lot, especially when you compare it to the rabbis who taught that three times was enough. Jesus replies, not seven times but seventy times seven. Here we go with the exaggerated language of the teacher. Seventy times seven is the Biblical way of saying an infinite number. It’s like me putting on the hard hat: saying or doing something slightly ridiculous, something exaggerated, helps you remember the lesson. I’m willing to bet that by next Sunday you probably won’t remember the details of what I said in this sermon but you will probably remember the sight of me in the hard hat. So Jesus doesn’t say “Many more than seven,” or “Keep trying”: he says, in effect, “A Gazillion”, because that will stick in the minds of his listeners.

By the same token, in the parable, Jesus inflates both the numbers and the actions of the King: the slave owes a million dollars – what slave ever had a million dollars? – and the King initially threatens him with total ruin and then, in the next breath, forgives him the whole lot – what creditor would ever forgive a gigantic debt like that? And the second slave owes a pathetic amount – a few bucks – and is actually assaulted and jailed over it. When the onlookers blow the whistle on this outrage, the King swings crazily from overdone mercy back to overdone severity and sends him off to be tortured – for ever – since we know he could never repay the debt.

It’s a story that makes us squirm. We resist the image of a sadistic, unpredictable God. It’s completely out of character for the God whose steadfast loving kindness is never-failing, whom we know as the source of love.

The parable reminds me of something my mother used to say when I screwed my face up or stuck my tongue out as a little girl: “You’d better be careful or the wind will change and your face will be stuck like that.” When I was five, I believed her, briefly, before I realized how ridiculous it was. But I’ve never forgotten it. Extreme language sticks.

A story of someone being thrown in jail for non-payment of a debt may seem exotic and remote, but unfortunately that isn’t the case. This week, Ferguson MO was in the news again, as community leaders dig into the underlying conditions that precipitated the recent violence. There are moves afoot to reform the system of court fees in Ferguson. Court fees are additional penalties and payments imposed by the court on people who have been arrested, or who have pleaded guilty, or who have failed to show up at a hearing. Those court fees add up and they incur interest; you can be jailed for non-payment.

It turns out that this is a widespread practice across the nation. In San Diego a $100 fine can quickly become a $490 debt when you add penalties and fees. In a community where minority populations are disproportionately arrested and where people low on the socioeconomic or educational scale are often compelled to plead guilty because they are told they won’t be credible in front of a jury, the scales of justice very quickly tip against the poor and those with poor social or communication skills. We have a broken system. Until I read about Ferguson this week, I thought debtors’ prison was only a memory from the Victorian age; but evidently it is alive and well.

So much for justice. What about the concept at the core of this story, the concept of forgiveness? Peter asks Jesus how often he has to keep trying to forgive someone. What do we mean when we expect or offer forgiveness? We know that forgiveness isn’t easy or cheap, especially in the face of a broken relationship or irreparable harm. Forgiveness is often not a single decision or a one-time event, but a series of decisions – maybe as many as 70 times 7, maybe a gazillion.

Forgiveness is a choice on the part of the forgiver. Nelson suggests, provocatively, that our choice to forgive doesn’t depend on the other person’s repentance or even awareness of the offense, because to suggest otherwise would be to suggest that my ability to forgive is controlled by your willingness to receive forgiveness; and this leads to the second characteristic:

Forgiveness is empowering. It liberates us from the power of the past to hold us captive and it frees us for the possibilities of the future. It leads us from the grave to resurrection.

Forgiveness is a skill, to be learned and practiced. Our instinct is to seek justice and reparation of the wrong, and that isn’t always possible. Forgiveness may mean living with an uncomfortable reality. That doesn’t come naturally. This is why I think Jesus includes the petition for forgiveness in the Lord’s Prayer. We need to pray every day to be forgiven as we forgive others; we need that daily reminder to work on forgiving others, so that we may fully experience forgiveness ourselves.

Forgiveness is a journey, not an event. Like the grieving process, it takes an unpredictable length of time and goes through different stages, some stages more than once. In fact, Nelson suggests, you might think of forgiveness as a sixth stage of grief, for in order to reach it you may first have to break through denial, anger, bargaining, depression and acceptance.

When we set out on the journey to forgiveness, we face a number of challenges.

To forgive is to open up painful wounds in ourselves and perhaps others: it makes us vulnerable to the accusation of minimizing or forgetting the offense. But that accusation is misguided. Eleanor Roosevelt famously forgave her husband for an extra-marital affair. She said, “I can forgive, but I can never forget.” The scars remain; the tender places remain tender.

To forgive is to relinquish our longing for justice, our desire for the offender to be sorry; and that desire can be very strong indeed. The words of Jesus on the Cross: “Father, forgive them, for they know not what they do,” are almost incomprehensible to us, uttered as they were while the soldiers were actively engaged in executing him. This is of course the ultimate act of forgiveness, and the challenge offered to us every time we come to the Communion table.

To forgive is to open the door to facing our own need to be forgiven. “Forgive us our trespasses, as we forgive those who have trespassed against us.”

Scholars of forgiveness state that we should not assume that everyone wants to forgive. For whatever reason, even when we know what we SHOULD do, we sometimes choose otherwise. A story comes down to us from 16th-century Switzerland, about a man who was asked to recite the Lord’s Prayer but pretended he didn’t know it, because he knew that if he said it he would have to forgive the merchant who had cheated him, and he preferred to hang onto his anger.

After my parents died, relatively early in my life, I didn’t know how to grieve. I avoided grieving their deaths for decades: the only way in those years for me to manage the loss was to lock all the feelings away deep down inside. It felt too risky to open what I came to think of as Pandora’s box of emotions. It was only much, much later in my life that I entered a grieving process and realized along the way that I needed to forgive my parents for leaving me so early. If forgiveness is an aspect of grief, at some point in order to move forward we have to open Pandora’s box. That can be extraordinarily hard.

The Forgiveness Project is an international online project that exists to promote forgiveness and to share stories of forgiveness. The stories come from all over the world; offenses range from a 15-year-old stealing cash to two young men brutally murdering a mother and two young sons at the direction of the boys’ teenage sister. Each story relates a journey towards forgiveness. In most cases it took years; in some cases the story-teller hasn’t yet achieved forgiveness. For some people, forgiveness comes through the intervention of God in prayer. For others it comes through the realization that the perpetrator is also wounded and as much in need of love as the victim. For one woman, forgiveness came through a process of writing about her murdered daughter; perhaps the apostles too walked the path towards forgiveness after the crucifixion when they wrote the Gospels.

“How many times should I forgive?” Jesus says, as many times as it takes: a gazillion times. For, until we find the grace to forgive, we will not believe ourselves to be forgiveable and only then will we be able to receive God’s freely offered gift of salvation.

1 thought on “The Sunday Sermon: How Many Times should I Forgive?”