Skip to content
Home > News > The Sunday Sermon: The Healing of the Blind Man

The Holy Gospel of our Lord Jesus Christ according to John.

Glory to you, Lord Christ.

Preacher What do the disciples see, when they look at the blind beggar at the Temple gates? They see a category, an example, an image shaped by their own narrow minds. Affliction, to the disciples, is a punishment from God. Someone must be to blame. If not the man himself, then his parents must have done something for him to deserve this blindness. What does Jesus see, when he looks at the man born blind? He sees a child of God, a man ripe for transformation; he sees an opportunity for God’s love, compassion and glory to be made known. The disciples are trapped in the past, demanding explanation for sin; Jesus looks into a bright future, filled with possibilities. When the prophet Samuel looked at David, the bright-eyed, ruddy-cheeked shepherd boy, he saw an overlooked younger brother. But God saw the future of Israel in that boy, a king in the making.

When we look at the person pushing an overloaded cart on the city sidewalk, what do we see? Do we see a strange, unattractive creature who somehow threatens our own well-being, do we see a sinner who deserves his misfortune, or do we see a child of God and an opportunity to demonstrate our Christian love? God is not concerned with our past, what has already happened to us; God is concerned with our future and what, through grace, we will make of it.

“We must work the works of him who sent me while it is day; night is coming when no one can work. As long as I am in the world, I am the light of the world.”

Preacher Jesus makes eight “I am” statements in John’s Gospel. This I AM statement introduces the sixth great sign, the turning of the blind man’s darkness into light. It demonstrates that he is indeed the earthly incarnation of the great I AM, the one who sent Moses, who called Samuel, who loved David. The light lives in all times. The light shines in the darkness, then and now.

When he had said this, he spat on the ground and made mud with the saliva and spread the mud on the man’s eyes, saying to him, “Go, wash in the pool of Siloam” (which means Sent). Then he went and washed and came back able to see.

Preacher Three simple phrases: he went, he washed, he came back able to see. The simplicity of the language almost obscures the miraculous action. The simple actions and words of the man born blind stand in stark contrast to the confusion and complications raised by everyone else in this story. He simply does what he is told by Jesus, he goes where he is sent, and a miracle happens. It’s as simple as that.

The neighbors and those who had seen him before as a beggar began to ask, “Is this not the man who used to sit and beg?” Some were saying, “It is he.” Others were saying, “No, but it is someone like him.” He kept saying, “I am the man.” But they kept asking him, “Then how were your eyes opened?” He answered, “The man called Jesus made mud, spread it on my eyes, and said to me, ‘Go to Siloam and wash.’ Then I went and washed and received my sight.” They said to him, “Where is he?” He said, “I do not know.”

Preacher These people, who have known him all his life, doubt the evidence of their own eyes. Before, all the neighbors saw was a disabled person. They probably didn’t even look at his face; perhaps it would make them too uncomfortable. Now their limited imaginations cannot accept the transformation. They cannot see the truth. And see how the man is transformed: where before he didn’t even dare to ask for healing, now he speaks up for himself. He is no longer passive, begging. He is an evangelist, sharing the good news with clarity and confidence.

They brought to the Pharisees the man who had formerly been blind. Now it was a sabbath day when Jesus made the mud and opened his eyes. Then the Pharisees also began to ask him how he had received his sight. He said to them, “He put mud on my eyes. Then I washed, and now I see.” Some of the Pharisees said, “This man is not from God, for he does not observe the sabbath.” But others said, “How can a man who is a sinner perform such signs?” And they were divided. So they said again to the blind man, “What do you say about him? It was your eyes he opened.” He said, “He is a prophet.”

Preacher The Pharisees are blind to God’s power; they too are trapped in the darkness of their own minds. This cannot be the work of God because it’s against the rules. How often do we take refuge in the rules, so that we don’t have to risk reaching out beyond our safety zone? How far are we prepared to stretch for the sake of the Gospel? The Holy Spirit operates outside of our rules. It makes us uncomfortable. We look for justice: How can a sinner receive such a blessing? What has he done to deserve it? But instead we might look for mercy: What have we done to deserve redemption?

The Jews did not believe that he had been blind and had received his sight until they called the parents of the man who had received his sight and asked them, “Is this your son, who you say was born blind? How then does he now see?” His parents answered, “We know that this is our son, and that he was born blind; but we do not know how it is that now he sees, nor do we know who opened his eyes. Ask him; he is of age. He will speak for himself.” His parents said this because they were afraid of the Jews; for the Jews had already agreed that anyone who confessed Jesus to be the Messiah would be put out of the synagogue. Therefore his parents said, “He is of age; ask him.”

Preacher To be blind is to be isolated in one way; to be healed miraculously, or even to acknowledge the miracle, is to risk isolation in another way. The parents are so afraid of the power that has been manifested in their son, that they turn away from him, afraid that they too will be blamed and expelled. They don’t have the courage to believe their son and to accept the good news. Like everyone else in this story, they are blind to the light shining in their darkness, to the truth in their midst.

So for the second time they called the man who had been blind, and they said to him, “Give glory to God! We know that this man is a sinner.” He answered, “I do not know whether he is a sinner. One thing I do know, that though I was blind, now I see.” They said to him, “What did he do to you? How did he open your eyes?” He answered them, “I have told you already, and you would not listen. Why do you want to hear it again? Do you also want to become his disciples?” Then they reviled him, saying, “You are his disciple, but we are disciples of Moses. We know that God has spoken to Moses, but as for this man, we do not know where he comes from.” The man answered, “Here is an astonishing thing! You do not know where he comes from, and yet he opened my eyes. We know that God does not listen to sinners, but he does listen to one who worships him and obeys his will. Never since the world began has it been heard that anyone opened the eyes of a person born blind. If this man were not from God, he could do nothing.” They answered him, “You were born entirely in sins, and are you trying to teach us?” And they drove him out.

Preacher Only the healed man has the courage to stand up to the Pharisees in their blindness, a courage given him by God in his healing. His encounter with Jesus has given his life meaning, a reason to be courageous. He has met the Truth, and so he must tell the truth. The truth has set him free, free for discipleship. But discipleship can be costly.

Jesus heard that they had driven him out, and when he found him, he said, “Do you believe in the Son of Man?” He answered, “And who is he, sir? Tell me, so that I may believe in him.” Jesus said to him, “You have seen him, and the one speaking with you is he.” He said, “Lord, I believe.” And he worshiped him.

Preacher Jesus goes out looking for the lost. He seeks out the outcast; he invites the exile to follow him. He offers a new community, a community of the healed, of those who make others uncomfortable, of those who stand in the light and see clearly the awesome power of God in the world. Jesus invites us too into the community of all those rescued and released from blindness.

Jesus said, “I came into this world for judgment so that those who do not see may see, and those who do see may become blind.” Some of the Pharisees near him heard this and said to him, “Surely we are not blind, are we?” Jesus said to them, “If you were blind, you would not have sin. But now that you say, ‘We see,’ your sin remains.”

Preacher Jesus offers us a new creation, a new way of seeing, a way of courage and freedom. Will we be like the man born blind, eyes opened to the truth, ready to believe and to follow, or will we be like the disciples, neighbors, parents, and Pharisees, blind to the possibility of transformation, trapped in our own darkness? Jesus offers us light and life. See, believe, and worship.

The Gospel of the Lord.
Praise to you, Lord Christ. 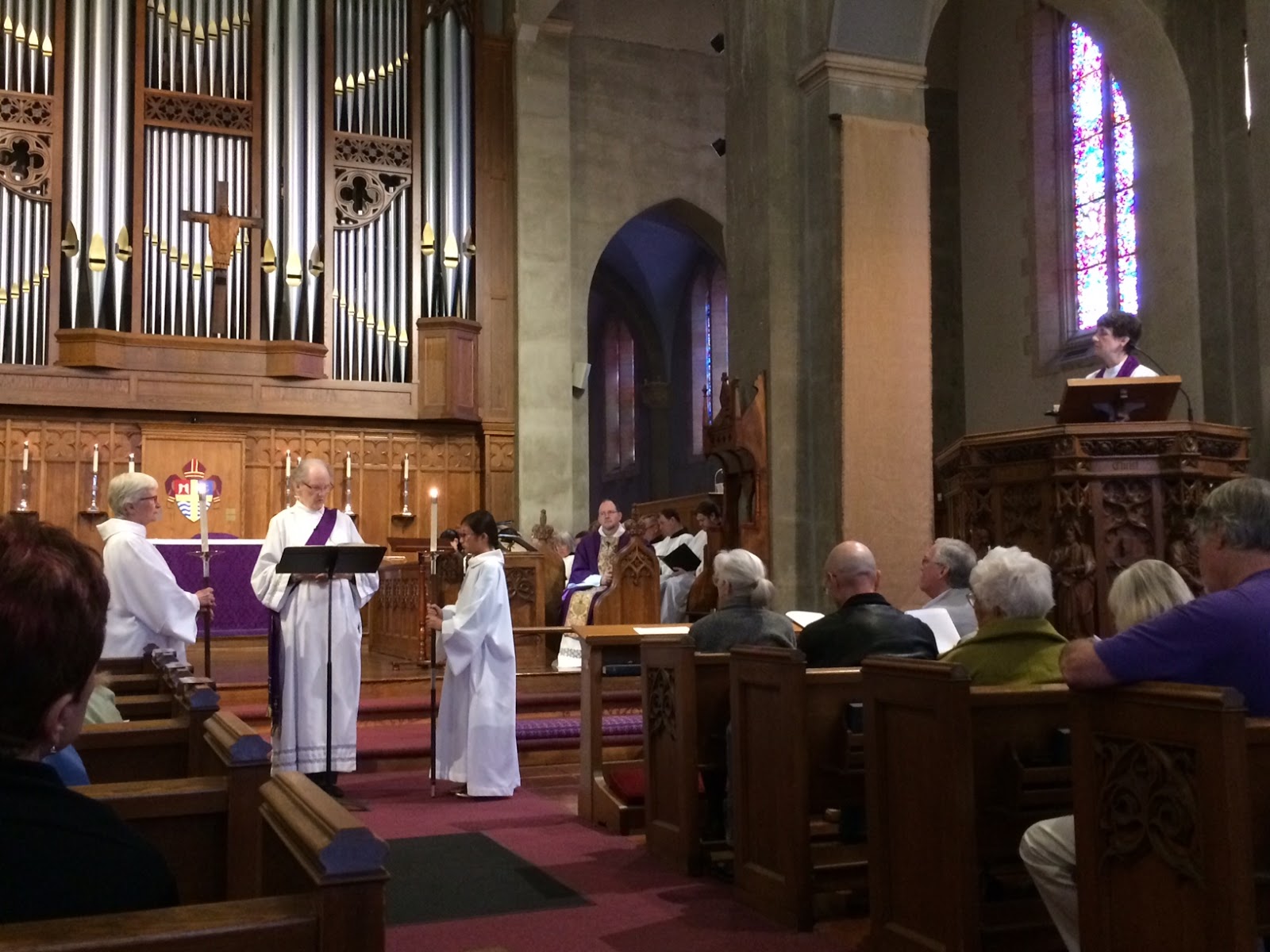