Skip to content
Home > News > The Sunday Sermon: A Different Kind of Power 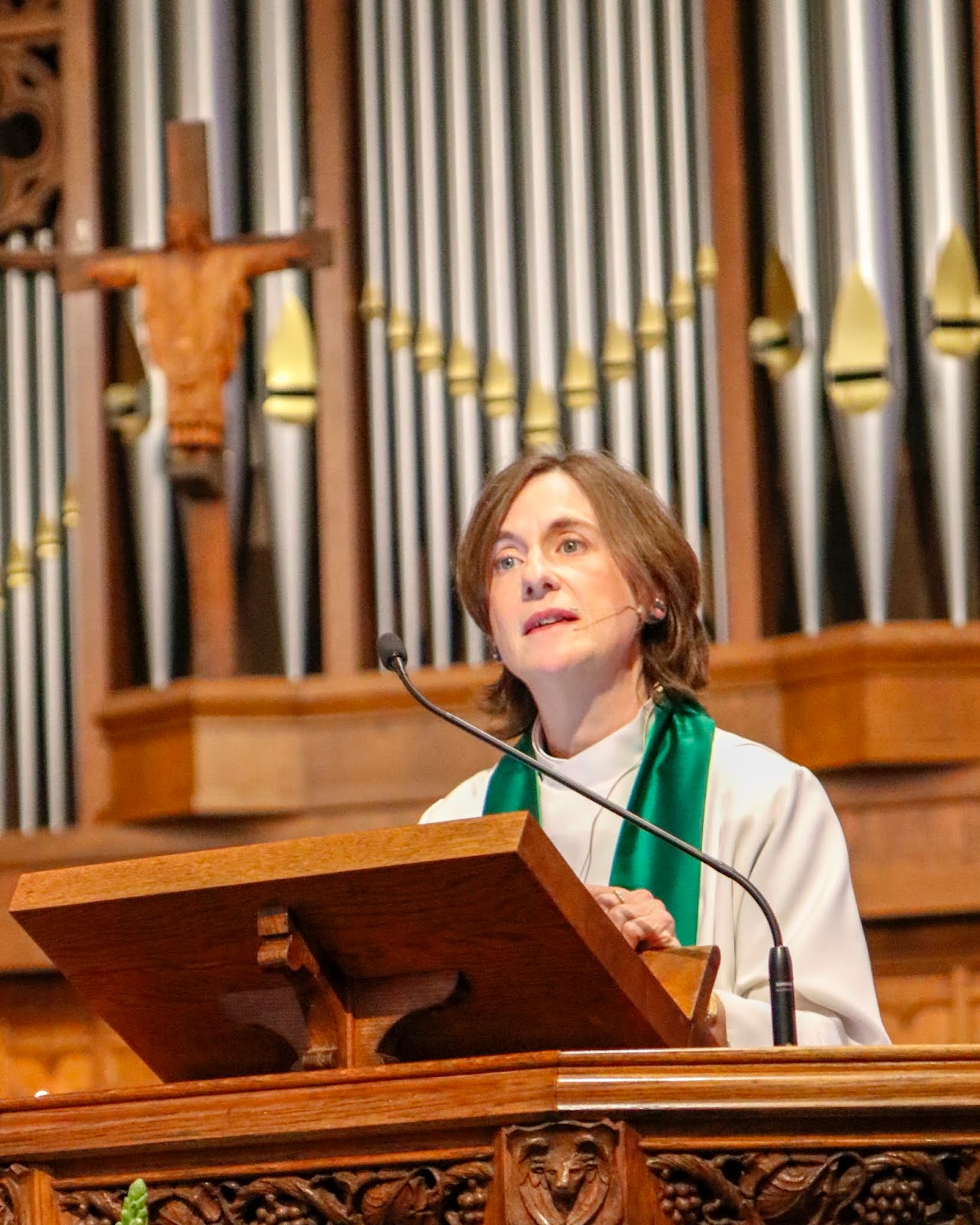 On Friday, the Capital Gazette newspaper in Annapolis published an almost entirely blank editorial page. At the end of a week when a supreme court justice announced his retirement and national turmoil continued over the detention of immigrant families, the Capital Gazette chose not to express any opinion in its Friday edition. Instead, the page contained a simple tribute to the five newspaper employees shot to death in the newsroom on Thursday afternoon. “Today we are speechless,” the page read, along with the names of the five victims. It brought me to tears.

The lack of words sent a powerful message, in a time when words are in all too plentiful supply. The power of words is being blamed in part for the shooting: people in positions of national power and influence have made statements that some see as inciting violence against the press. But on Friday, the organization targeted by that violence used a different kind of power to make their statement of lament.

Sometimes, lament is all we have to offer. As the second book of Samuel opens, David is lamenting the deaths of Saul and Jonathan, his enemy and his beloved, his king and his rival for the crown. The relationships were complicated, to say the least. But David´s lament is whole-hearted. He honors his enemy, the king who sought to kill him, equally with his dear friend, Saul´s son Jonathan. He pauses to grieve, and then he presses on with the business of kingship, of mopping up resistance, of reuniting a nation divided by civil war. If you read on in Second Samuel you will see the various ways David consolidates power, using military might, trade deals, savvy marriages, and the establishment of Jerusalem as a fortress capital. The whole saga of David and his family is about the struggle for power.

In Mark´s Gospel, the synagogue leader Jairus has reason to lament. His 12-year-old daughter is dying. He is so distraught that he humbles himself before Jesus, virtually worshiping him as he begs Jesus to lay hands on her and save her. Our translation says he asks “that she may be made well and live”, but an equally valid interpretation would be “that she may be saved for eternal life”. So there´s some ambiguity to what he thinks Jesus can do. Jairus uses his privilege to force his way through the crowd to Jesus. He goes to the front of the line and interrupts whatever Jesus is doing to ask for his intervention in a dramatic and public way, obviously expecting Jesus to respect his wealth and position and to give his family priority.

Contrast this man with the woman who is bleeding. She isn´t given a name. She doesn´t demand Jesus´ attention. She has no sense of entitlement. She is not supposed to be in that crowd. She has no privilege. She has been bankrupted by medical bills. She is ritually unclean, as menstruating women have been ritually unclean from time immemorial and are still mistreated in some parts of the world. She dares not cry out for help or draw attention to herself, although she has been suffering for twelve long years, the entire length of the little girl´s life. I am tempted to wonder if she is the girl´s mother, suffering from a childbirth-related injury that has never healed, expelled from the community and comfort of her family because of her husband´s important role in the synagogue.

Let’s just notice that the girl has a powerful advocate in her father, whereas the woman must fend for herself. This nameless woman has no expectations, just a hope. She dares to hope that if she can just get close enough to Jesus, even if he doesn´t know she is there, that she can receive healing – or, here´s that ambiguity again, salvation. She isn´t asking him to lay his hands on her – that would be socially unacceptable even if she were well. She doesn´t want to bother him with her pain or her shame. So she reaches out in the midst of the crowd to touch his cloak. In that moment she is physically healed. There is no ambiguous language here.

And, just as Jairus interrupted scheduled programming to demand healing for his daughter, so now Jesus interrupts Jairus’s agenda to offer healing to someone else’s daughter.

I sometimes joke about what I call the ministry of interruption. It’s the nature of parish ministry that interruptions happen all the time: you never know what’s coming at you next. The other day I was walking briskly to a board meeting at St. Paul’s Senior Services, when I was hailed by one of our more volatile homeless guys. “Buy me a soda: I need the sugar,” he said, as I was passing the Marketplace. Somehow I found myself in the store digging a can of Squirt out of the refrigerator for him, even though it was going to make me late for my meeting. I surprised myself: I’m not usually that open to interruption! And here in the Gospel, Mark is reminding us that following the way of Jesus requires a willingness to be interrupted.

Jesus feels a tug on his cloak, and he instantly feels compassion for this woman. That’s compassion in its true sense of suffering with, feeling with, the other. Jesus knows our pain and our joy intimately, even when we don´t want him to know. Even in the crush of the crowd he recognizes that someone is in need and he stops his progress towards Jairus´s home to respond and to complete the work of healing. Because the work of healing must include the healing of relationships. The one who has no voice must be given a voice. The powerless must be lifted up. And no matter how marginal, no matter how objectified, no matter how dehumanized, someone might be, by society’s norms or political posturing, each and every human being commands the attention and the loving care of Jesus. And so he calls her “daughter”, adopting her back into the human family, restoring her place in the community, and he says, “your faith has made you well.” Or – ambiguity once again – perhaps he says, “Your faith has saved you.”

How ironic that in the very next sentence, Mark tells us that people come from Jairus’ home telling him not to bother the teacher because the girl has died. As the woman’s faith saves her, others demonstrate a lack of faith. Despite this, Jesus proceeds to heal and restore the little girl, offering a healing touch that brings instantaneous resurrection – and yes, this is the word later used for the resurrection of Jesus. The girl is restored to fullness of life and is to rejoin her family at the dinner table, the center of community, signalling that her own uncleanness, that of death, has been wiped away.

It’s a story of power on many levels: the establishment power that Jairus uses to get Jesus’s attention. The power of desperation that drives Jairus to his knees and the afflicted woman into the midst of a potentially hostile crowd. The power to heal in body, mind, and spirit. The power of Jesus to take someone by the hand and lead her from illness to health, from isolation to community, from death to life.

Maybe you feel as powerless as I do, watching the daily assaults on American values and the steady rolling back of progressive national policies, dreading the likely shift of power in the Supreme Court, grieving for the families torn apart at the border. Our power to protest feels less effective each day that passes, with the constant barrage of things that need to be protested. The power of the ballot box is compromised by accusations of hacking and the character assassination of candidates – who or what can we trust?

Well, we can turn to a different kind of power, power that is found in the compassionate love of God, a love that reaches out to the voiceless and the disempowered, a love that takes the time to turn aside and respond to need, a love that restores health and community and joy and fullness of life even to those who are silenced by shame or seemingly dead.

Jesus came to give voice to the voiceless, to lift up those who are oppressed, to demonstrate to the world that every individual has value in God´s eyes. This is what he has done for us, insisting that we each matter, that regardless of the particularities of gender, age, privilege, or ability, we are precious in God´s eyes and worthy of full inclusion, nurture, and wholeness. And, as members of the Jesus movement, we get to demonstrate that others are equally precious by sharing what we have in abundance with those who have less: community, engagement, life in its fullness, and a seat at God’s table.