Skip to content
Home > All Our Voices > Stewardship: Joanna Airhart 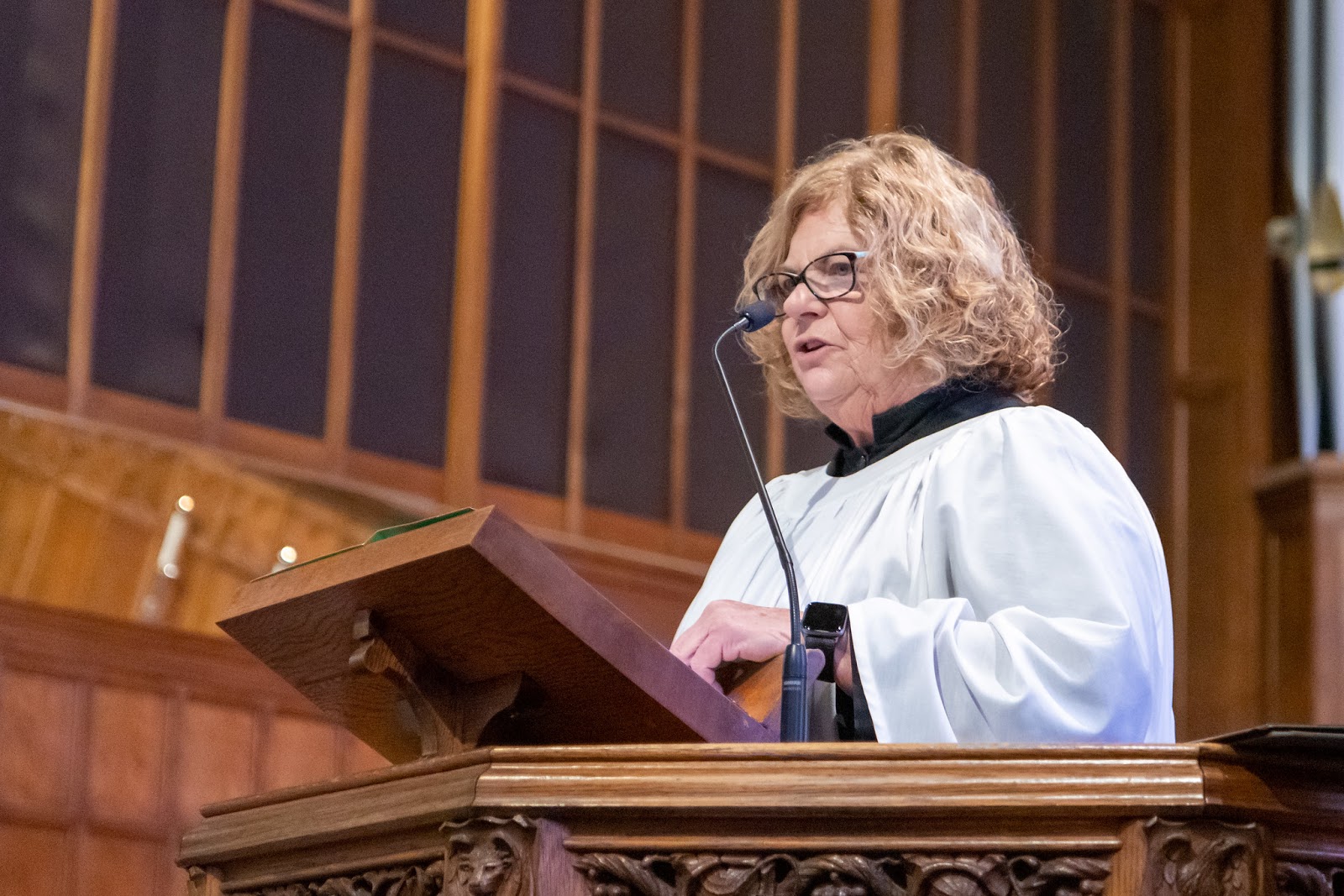  Good morning, my name is Joanna Airhart. I sit up there with the sopranos. This church is in my DNA. St. Paul’s was downtown in 1899. My paternal grandparents were courting, so my grandfather would walk my grandmother home after her choir practice.
When I was 6 years old my mother brought me to St. Paul’s. I am sure my mother wanted her children to grow up in the church. St. Paul’s has been my foundation in life since I was 6. Joined the Girl’s Choir at 8.

You see Matthew, Mark, Luke, and John here on the pulpit. They are glued down now. When I was a kid I could hold them like babies. St. Paul’s had become my home.

My mother and her mother wanted a girl in long formal gowns with the long gloves too. Early 60’s society diet doctors were handing out amphetamines. My mother meant well, but had no education about what a family history of addiction can do to a teenager. I didn’t know that what was wrong with my moods was depression. The “diet pills” were finally what my serotonin had ben waiting for. I felt normal.

 My 22 years of addiction began with that legal speed. All through college I bought illegal speed and then began smoking pot. I wasn’t able to compete my degree. When I turned 21 I stayed in my bedroom for 3 months with speed in the day, sleeping pills at night, and vodka.
I got my first preschool teaching job and made some friends that all did drugs. Around this time in my life, church and choir were getting in my way of my weekends on acid in the desert. I quit choir and I quit church.

You know the beach poem, Footsteps in the Sand? That was me. You couldn’t see my footsteps because God was carrying me. The next 10 years were drug centered. Crystal meth became my love. I got married here at St. Paul’s but left him after 4 years because he wouldn’t let his hair grow long. I was a drug addicted hippie. No plans, no motivation. Then I met the not- perfect person for me, someone who grew marijuana for a living. Therefore, I became a drug dealer. That is until people would call me on the school phone wanting to buy pot.

Did I mention I wasn’t going to church? The not so perfect person asked me to move to Oregon. I thought that if I didn’t get out of San
 Diego soon I was going to end up in jail. So I moved to a hippie conclave in the mountains of Oregon. Guess what? God accompanied me to Oregon.
Life happened and I became pregnant and was going to be a single mother. I too, like my mother, wanted my child to have a foundation in the church. I started going to Good Samaritan in Corvallis, Oregon. Then, 36 years ago on Thursday, there was no heart beat. Mary Elizabeth was is her name.

I started volunteering with teenagers at the Corvallis church. The following summer I promised the youth leader that I wouldn’t do any drugs at the coastal summer camp. Well, I kept my promise. God came to me at that church camp. I had a revelation that I had been on some form of drug daily for 22 years. I knew I wasn’t going back but I had no idea what I was going to do. From the camp the chaplain sent me to a treatment center in Portland. My Oregon church friends were there for me. I got clean and sober 9 months after Mary died. 3 years after her death, I woke up with a start and said “she brought me back to God.” When I could afford a grave
 marker, I had “God’s Gift” engraved under the picture of a baby angel holding a cross.

I was sober so I was able to complete college. I became a drug counselor in Florence, Oregon. Then a few years later I heard the loud voice of God saying, “Joanna, what are you doing here? Go home.”

I came home and took care of my ailing mother. I can now visit her in the columbarium.

When my mother died, 8 years after I came home, the whole choir turned up for the 11 AM funeral on a work day.

I am telling the story about addiction and recovery because it is MY story. God never left me. I could have died countless times but I didn’t. It is because God never left me even when I didn’t remember that fact.

 St. Paul’s Cathedral is my home. From my front row seat in the choir I get to see the Lord’s Prayer window. I get to be close to the altar. What an honor!