Skip to content
Home > All Our Voices > Push for More, Not Less 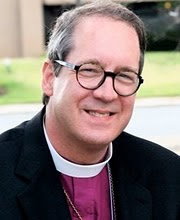 Our Bishop wrote this on his blog, Under the San Diego Sun, on October 4th. Cross posted with permission.

I just read that Governor Schwarzenegger and the state legislature have agreed to a deal that will close the 19 billion dollar budget gap. Details have not yet been revealed. 19 billion! That is a stunning number. To get it down to a reasonable size, that is $554 per California resident. It is less than $1.50 per day for each resident.

I point this out because my neighborhood is peppered with signs that say, “No on D,” a referendum to increase the sales tax in San Diego. After all, our city is similarly in a financial crunch. But let me stay with the big picture. Our state economy is 1.85 trillion dollars. We have more fortune 500 headquarters than any other state except Texas, which has the same number. Truth be told: there is plenty of wealth in California to pay the state’s current bills.

To end our financial crisis, however, we must recover a sense of the common good. We must decide that our neighbor’s welfare is just as important as our own. In fact our own welfare is inextricably connected to our neighbor’s.

Another truth: we are not paying our own way. We are investing in a society that relies too much on the contributions of the previous generations. And we don’t invest enough to assuage the pain and suffering of those on the margins of society. We don’t invest enough in education and welfare programs.

My bet is that when the governor and the legislature reveal the details of their budget deal, they will have balanced the budget at the expense of those least likely to vote and to be heard from: the poor, the homeless, the mentally ill.

Here is what I am going to do. I am going to vote in favor of every tax increase that I can so that there will be more. I am writing my representatives to continue to push for more, not less, for those on the edge of making it—even if I have to pay more.

This is how we strive for justice and peace and respect the dignity of every human being—at least this day in California.