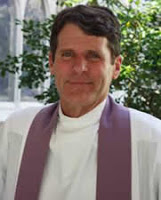 It is wonderful to be gathered together in this cathedral to honor and to give thanks to God for the men and women who answered the call of their country by serving the cause of freedom in the Armed Services. I’d like to ask all our veterans to stand and be recognized. Would you please stand so we may know who you are?

Thank you for your service. We are honored to be in your presence and are humbled by the sacrifices you and your families have made. Thank you.

You know, we’re in the season of the church calendar that I call All Saints. We celebrated that great feast on Nov. 1 and last Sunday. And I simply want to lift this season of All Saints into our awareness as we reflect tonight on Veterans Day. This time of year does funny things to me. Beginning with All Saints Day, continuing through Veterans Day, Thanksgiving, Advent, and into Christmas I experience a heightened awareness of what Celtic Christians call the thin places. Thin places are those occurrences or times or events in our lives when the veil between this visible, tactile, physical world and the invisible, spiritual, eternal world is stretched very thin. Thin places occur when the curtain or veil between heaven and earth is somehow made more permeable or porous—thinner—and communication between heaven and earth passes back and forth more easily. It’s as if the two worlds draw closer in those moments, and we are made hyper-aware of life’s deeper meaning, of God’s nearness to us in the here and now, we get a sense of how interconnected we all are: of how everything that has come before has led to this present moment and how this moment is part of a larger, unfolding future. Thin places are mystical experiences. You can’t create them; they simply happen. They come from God. Who knows, perhaps tonight we will be blessed to have the veil stretched thin tonight as we pay tribute to our veterans.

We who live in military towns know all too well the austere, formal dignity of a military funeral. At the end of the burial service, taps is played, the American flag which is draped over the coffin is carefully folded into a triangle by an Honor Guard, and is presented to the next of kin. The Officer-in-Charge kneels down before the spouse, parent, or child, or closest family member and says these words: “On behalf of the President of the United States and the people of a grateful nation, may I present this flag is presented as a token of appreciation for your loved one’s honorable and faithful service.”

From the beginning of our nation, from the Revolutionary War, through the War of 1812, the Indian Wars, the Mexican War, Civil War, the Spanish American War, the two World Wars, Korea, Viet Nam, right through the Gulf War, Somalia, up through Afghanistan and Iraq over 43 million men and women have served our country in the Armed Forces—43 million war-time veterans. 660,000 Americans have been killed in battle. An additional 2 million Americans have been wounded in battle. Those are physical wounds. Emotional/spiritual wounds are not recorded. But you and I know veterans who are still haunted by the demons of what they experienced in combat. Today, there are over 26 million veterans living among us today who have answered our nation’s call to military duty. We will never be able to thank these people, over half of them have entered into the larger life. Yet, we are the recipients, the beneficiaries, of their willingness to defend and protect this land you and I call home.

“A grateful nation”…“honorable and faithful service.”

This time of year, I’m filled with gratitude for all of God’s blessings. High among those blessings are sacrifices these nameless and faceless veterans Sometimes I feel their presence quite close as the veil stretches thin. They speak out to me saying, “Yes, freedom, democracy, looking out for the down-trodden are principles worth defending and protecting.”

Who are these multitudes who answered the call and from whence did they come? They came off the farms…and out of the cities. They came from colleges and universities… and from the bread lines and unemployment lines. They came from the mansion…and from the servants’ quarters. They came—white, black, red, yellow; some with Polish names, Italian names, Jewish names, Russian names, African names, English names, Arabic names. Some came early in the day, some came at mid-day, some came late in the afternoon. It doesn’t matter. They answered the call from every quarter and every section of our American life because they shared this nation’s vision of life, liberty, and the pursuit of happiness. They answered the call and their lives were forever changed.

Many of them served during popular wars and were aided with strong civilian support. When they returned home victorious, they were greeted with a hero’s welcome. Many of them served in unpopular wars over which the nation was severely divided and victory was never claimed. Their homecomings were hardly noticed at all and certainly not celebrated.

But each of them served honorably and faithfully in their day, and a grateful nation remembers.

I encountered a “thin place” a few years ago while performing my Navy Reserve drill at the Naval Air Station at Mayport, Florida. There was a shipmates’ reunion of a ship which had served during three wars: WWII, Korea, and Viet Nam. They came to the base chapel to have a brief memorial service for those shipmates who had died since their last reunion. There were about 40 men aged from mid-80’s to mid-60’s. There were some spouses and a few grown children accompanying these former sailors. The chaplain leading the service asked each shipmate to state his name, home state, what his duty aboard ship was, and when he had served the ship. The eldest man went first. In his 80’s, he was in a wheelchair with his wife beside him. She was stooped, hunched, and used a walking cane to get around. From Idaho, he joined the Navy at 18 years old and served during WWII. He married his high school sweetheart one week before shipping out. His wife of 60+ years was with him as was their youngest daughter. He had been a boatswain’s mate. The next person was from Chattanooga, Tennessee and had served as the ship’s Executive Officer in Viet Nam. The next person was Zeb Zibrinski, from Chicago. He’d served during the Korean War as a signalman. There was a sonar man, a few gunners’ mates, a radio man. On and on…name, state of entry into service, job description, and when they served. The veil got stretched thin as I listened: “Johnson, Oregon, engineer, 1944-46; Roberts, California, firefighter, 1951-53; O’Brien, Massachusetts, 1959-61; Smith, Alabama, cook, 1964-67, Owen, Florida, medical corpsman, 1960-62.

I closed my eyes as I listened to each speaker and in my mind’s eye I could see them in their youth, full of vim and vigor, these now older, senior veterans. What hopes, dreams, and visions they had as they answered their nation’s call. What heart-break they felt as they left careers, girl-friends, parents, children! I saw them in their former youth…and I think they saw themselves momentarily back in their youth as they recited their name, state of entry into the service, job description, and time aboard ship. The chaplain thanked these sailors for their service. He talked about how they had been a part of something larger than themselves—that the ship couldn’t operate without a boatswain’s mate, couldn’t function with out an engineer, couldn’t sail without the sonarman and radioman, couldn’t accomplish its mission without the gunners’ mates and cooks and corpsmen. He spoke of how all of our common life depends upon this sense of teamwork and sacrifice.

The veil started becoming very thin for me. And I began “seeing” all those nameless and unknown millions of veterans who lived in past and present centuries and who placed themselves on the line for our sake. This freedom we enjoy, this abundance of life, these liberties we so easily take for granted were paid for at a huge cost—43 million people have offered themselves for this freedom. 660,000 have paid the supreme sacrifice of their own lives. 2 million have lost legs, or arms, or became paralyzed, or otherwise permanently disabled due to battle wounds. As the Navy chaplain said, “Our common life depends upon this sense of teamwork and sacrifice.” And in that moment in that Navy chapel, I could sense their presence, and I was filled with gratitude. Words fail at times like that.

We are all of us so much more interconnected than we know. The actions of a veteran in the 1860’s impact our common life in 2006.

“On behalf of a grateful nation…”

So, dear friends, in this season of All Saints, on this Veterans’ Day weekend, let us acknowledge this “thin place” in which we find ourselves surrounded—surrounded—by so great a cloud of witnesses. Can you sense their presence? Many of them have sat in these pews and worshipped in this place. Let us be thankful…for those who have gone before…but also for those 25 million veterans who are still living in our midst may we truly be “a grateful nation.”
Amen.