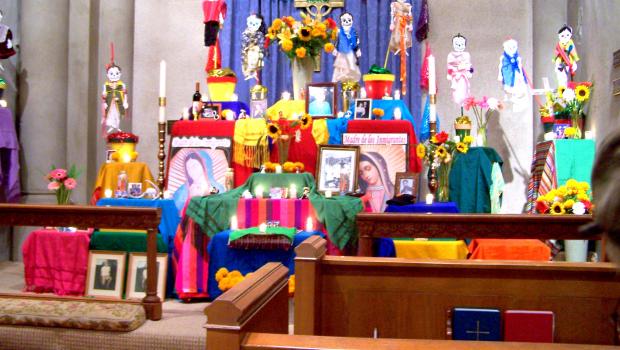 Friday Nov 2, 7pm
Join us as we celebrate Día de Los Muertos (Day of the Dead, but really a Celebration of Life). This bilingual service links our concern for pastoral care and multi-cultural ministry by recalling and commemorating with prayer our faithful departed. We will also create an altar of rich color, beautiful flowers, personal pictures, holy candles, and playful statuary. By holding death communally and lightly, we are able to look beyond the grave to the joy of heaven. Please bring photos or other mementos to share. All are welcome. After the Mass enjoy spiced hot chocolate, cookies and a traditional Mexican pastry, pan de muertos.


In the calendar of The Book of Common Prayer, November 2 is appointed as the Commemoration of All Faithful Departed. In Mexico the is popularly referred to as el Día de los Muertos or “The Day of the Dead”. 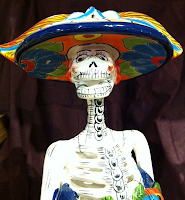 Contrary to what many people north of the border may think, it is not a scary and ghoulish piece of folk religion. It is an example of the meeting of two religions: Christianity and indigenous Mexican beliefs. These beliefs are seen by many historians of religion as forerunners of Christianity. Mexicans, like the ancient Hebrews, believed in one God, here named Teotl, above lesser divinities. In Psalm 82 we read aboutYahweh who “gives judgment in the midst of the gods.” There was also a belief in the soul’s existence after death, not unlike the way the Christian Church believes it as expressed by St. Paul when he exclaimed, “Death, where is your sting?”

In the Creeds of the Church, we confess the oneness of the faithful in the Church in heaven and on earth. Indigenous Mexicans held similar beliefs, and once a year that oneness was celebrated on the Day of the Dead when the distance between the living and the dead was bridged in a joyful celebration that mocked death’s loss of power over life. This belief has a remarkable affinity with the words of St. John Chrysostom in his Easter homily: “Christ is risen, the demons have fallen. Christ is risen and life is made free. Christ is risen and there is none dead in the tomb.”

The Spanish-speaking people of St. Paul’s Cathedral will construct a traditional Altar of the Dead signifying souls’ ascent into heaven, and they will festoon it with traditional adornments. We invite all people at St. Paul’s to bring a memento of their deceased loved one such as a photo, an item connected with a loved one, a small piece of artwork, etc., to place on the Altar of the Dead as we commemorate the Faithful Departed.