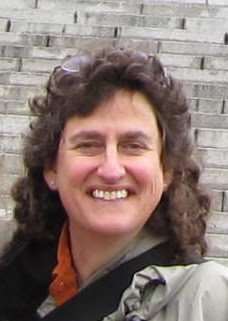 I have long felt, as I’m sure have many of you, that the log jam broke with the election of Bishop Gene Robinson in 2003. Not just breaking a logjam of exclusion of LGBT people from all levels of the Episcopal Church, but also a reaffirmation, and a challenge against the shrill voices of the right wing who claimed to define the concept of “Christian” . I think Bishop Gene helped voices of inclusive faith coalesce and reclaim “Christianity” from a narrow political movement. And I think history will see his election, and the coalitions it created, as a hugely important moment in LGBT equality in this country, well beyond one denomination. 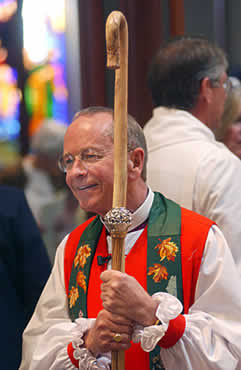 A modest, unassuming, loving man with a hint of the South in his voice, he was the perfect choice. He symbolized so much to so many far beyond the Episcopal Church. You may not quite appreciate how much this choice meant Outside. Despite its small size, the Episcopal Church continues to have an outsize influence on the Establishment. When you do something, people notice. One of my friends, who is Jewish, even wrote Bishop Gene a letter expressing what he meant to people far outside the faith, with his simple, and joyous, message of love and acceptance (and she got an answer, too!)

I know that Bishop Gene’s election stimulated me to explore the Episcopal Church as a possible home for my wife (and me, as a sort of distaff member) and probably marks my real entry into the Episco-blogosphere.

Last summer, we drove up to Anaheim for the Integrity Eucharist. Bishop Gene presided, and I still remember his absolutely impish grin during the service as he walked around that big hotel space, flinging holy water at the joyful congregants. I also remember being able to speak briefly to him as he was coming through the reception area, on his way to vest, and saying inarticulately how much he meant to us as LGBT people. He paused, generously (he was late) and thanked me.

So I am really looking forward to hearing Bishop Gene Robinson speak, during his upcoming visit to our Cathedral on June 12 and 13. On Saturday, June 12 he will speak from 5:30 to 7 pm on The Church in Public Life: Preachin’ or Meddlin’? He will also preach at both Sunday services (8 and 10.30) and present the Forum at 9am. I suggest you get there early. Bishop Gene belongs to more than TEC.