Skip to content
Home > News > An Ordination Sermon: Poets of the soul

Jesus said, “As you go, proclaim the good news.”

It’s amazing to see so many people here in church to celebrate the Feast Day of St. Barnabas! I didn’t realize he had such a following . . .

And we are also here to celebrate the ordination of four amazing people to the diaconate: Jackie Bray, Chris Harris, Nancy Holland, and Richard Lee. Actually I suspect most if not all of us are here for the ordination but it is hard to think of a more appropriate feast day in which to be ordained.

The first mention of Barnabas is found in the fourth chapter of Acts. We are told the early group of believers “were of one heart and mind and no one claimed private ownership of any possessions but everything they owned was held in common . . . and there was not a needy person among them.”

“Joseph, a Levite born in Cyprus, whom the apostles called Barnabas (which means son of encouragement), sold a field he owned, then brought the money, and laid it at the apostles’ feet.”

Then a little later, after Paul’s conversion on the road to Damascus, we are told Barnabas takes Paul under his wings, and introduces him to the apostles who are understandably wary of Paul’s so-called conversion. But Barnabas tells them of Paul’s story and how forcefully Paul spoke of Jesus as Lord, at great personal peril.
From there Barnabas and Paul forge a powerful bond, serving as missionaries together, going to such places as Cyprus and even Jerusalem.

And yet, as so often happens in human relationships, being of one heart and mind does not last. The bond between the men is broken when Barnabas wants to bring John Mark with them on another missionary journey. Paul refuses to consider it, because John Mark had left them on an earlier one.

So, Paul ends up taking Silas and going to Syria and Cilicia, while Barnabas and John Mark go to Cyprus in which John Mark proves himself to be a trustworthy and loyal companion.

Considered the patron saint of Cyprus, Barnabas is believed to have been martyred there for his extraordinary success in preaching the Gospel, most likely by stoning. 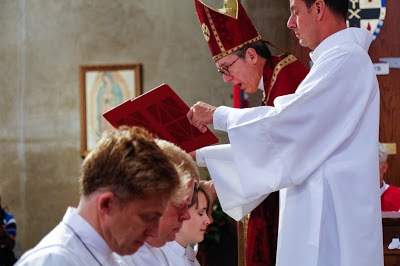 Actually you won’t need luck, all four of you are gifted beyond measure. But more importantly you are cherished, strengthened, upheld, and loved by the God you are about to pledge your life to in a new way.

However, there are characteristics of Barnabas and his story that bear examining, not just by you but by all of us who seek to live faithful lives guided by the Spirit. Or as theologian Dr. Robin Meyers puts it, to not only believe in Jesus, but believe Jesus.

So if we do believe Jesus, what then does it mean to proclaim the good news?

And we see from Barnabas’ life what it might entail.

To act with true generosity—give as an act of faith; to have zeal for mission and evangelism—be willing to take the message and story of Jesus, in any way possible, to people and places that can be unknown or even frightening; to have compassion—engage in the spiritual practice of seeing people as God sees them and not on the basis of what they have done or not done, or any of the innumerable ways we have for separating ourselves from one another.

And perhaps the most difficult, a willingness to die to self—and I am not necessarily talking physically, although obviously that can happen, but rather to our ego and the idols we all have such as the desire for status, comfort, approval, and appreciation.

Jesus isn’t kidding when he tells the twelve, “See, I am sending you out like sheep into the midst of wolves, so be wise as serpents and innocent as doves.”

So why do it? There’re certainly easier ways to live our lives.

It’s actually a good question to ask the four people about to be ordained when you think about their lives.

Jackie, you are young, about to get married and move to Japan. Things would be simpler if you chose another route. Plus, I can only imagine the coolness factor when you told your friends in college you wanted to be an Episcopal priest.

Chris, you had a very successful law practice. Leaving that to work for the church was crazy enough but to take on this new ministry—and it will be different in ways you can’t even begin to imagine, especially as you and Joe are about to become parents must at times seems overwhelming.

Nancy, you could retire and engage in all the things that bring you joy such as dancing, traveling and being with your family. And yet here you are, involved in the often demanding work of reimagining church and what it means to be the body of Christ.

Richard, you have a successful career and a husband who loves you dearly. No doubt time already feels precious and in short supply. And yet you are about to take on the unchartered life of a bi-vocational priest, because while you aren’t the first, everyone does it differently by necessity.

So once again, why do it?

Well perhaps the answer can be found in the words we just heard from the prophet Isaiah:

Thus says God, the Lord,
who created the heavens and stretched them out,
who spread out the earth and what comes from it,
who gives breath to the people upon it
and spirit to those who walk in it;
I am the Lord, I have called you in righteousness,
I have taken you by the hand and kept you.

All of us have been taken by the hand and called in righteousness to show some aspect of God the world would never know otherwise. We all have something unique to show the world about God. This is a gift given us in our creation and our journey on this earth is live into it.

Jackie, Chris, Nancy, and Richard, you listened to God’s call, even when it was difficult, especially when it was difficult, and with faithfulness, answered this wondrous, and yet often perplexing, call to ordained ministry.
Now, all calls, vocations, be they lay or ordained each have their own blessings and challenges, but certainly the call to ordained ministry overflows with both.

Church can be glorious—beautiful services such as this one, but more importantly lives changed, people served, and how we all—lay and ordained—are with each other in the most tender and vulnerable times of our lives . It is such an amazing privilege and honor.

And it can be incredibly messy and really hard. I think I have told all of you one of the most difficult things in my spiritual life I had to grapple with upon going to seminary, and frankly after being ordained, was getting caught up in the business of church rather than what lead me there to begin with.

But several years ago, I came across this wonderful little book called The Pastor as Minor Poet by the Rev. Dr. Craig Barnes, President of Princeton Theological Seminary, in which he reframed of the sacred work of pastors, clergy, which I found tremendously helpful. He wrote:

[W]hen we begin with our own identity in Christ
and the pastoral call to assist others in becoming fully
alive in him, we are freed from the drudgery of being
managers and service providers to pursue something
much more creative—being poets of the soul.

What the congregation needs is not a strategist to help
them form another plan for achieving a desired image of
life, but a poet who looks beneath even the desperation
to recover the mystery of what it means to be made in God’s
image.

My dear friends—you have each in your own way shown us through your generosity, zeal, compassion, and willingness to serve God, what it means to not only believe in Jesus but believe Jesus. You are all poets of the soul.
And with God’s help, you will proclaim the good news by helping and showing us, and yourselves as well, how we all might not just recover, but live into the mystery of what it means to be made in God’s image—the God who called you in righteousness, takes your hand, and keeps you always.

Please know as you do so, you do it with our gratitude, blessing, love, and great anticipation for how you will proclaim, make God manifest, in a world sorely in need of good news. 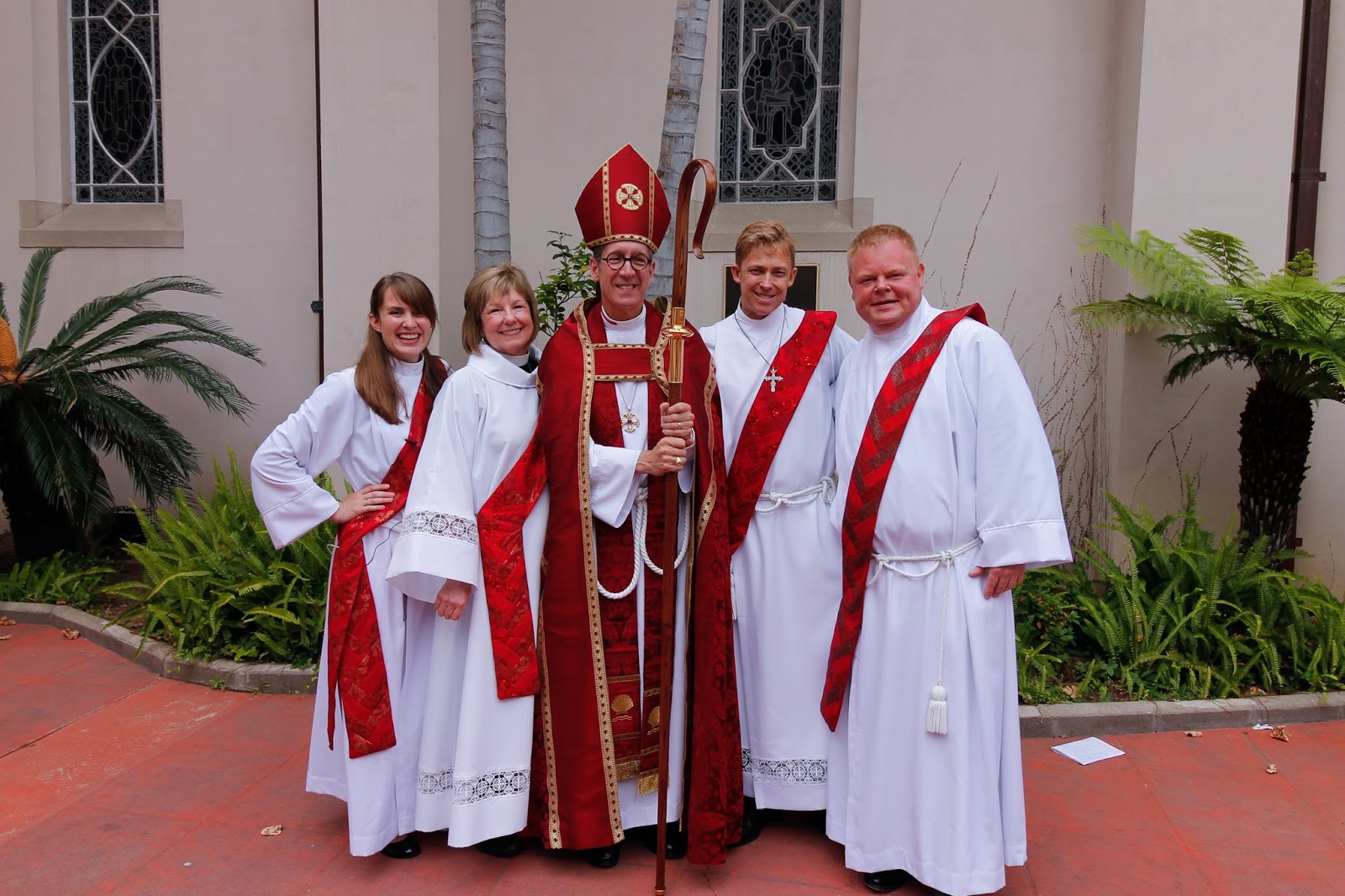