Skip to content
Home > All Our Voices > A new look at St George
The Rev. Canon Andrew Rank shares with us: 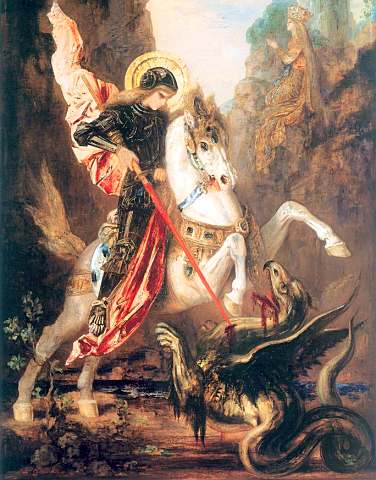 Leave it to Louie Crew, a retired professor from Rutgers and founder of Integrity, the LGBT organization of the Episcopal Church, that things aren’t always as they seem. This posting of his on Facebook page tells us something about good old St. George that probably few of us knew and perhaps why next year is the 50th anniversary of this celebration at our beloved Cathedral. Thanks and a pull of the dragon’s tail to Louie, one of our church’s great contemporary leaders from New Jersey.

St George the Dragon Slayer (click the link to read the whole thing!)

I’ve always been somewhat amused by the idea that St George, with no discernible link to this country, known primarily for an obviously mythical reputation as a dragon slayer, should have been adopted as patron saint of England…

That he should have a claim to a status as a gay icon increases the appeal. To cement the deal, the nature of his claim, to a mystical experience in which he is described as the “bridegroom of Christ” pretty closely resembles the central experience of the most intense retreat of my own life.

I think I should change my middle name to “George”.

Now, consider the dragon. The value of plainly mythical beasts lies in their potential as symbols. If we use the dragon image to represent ignorance, homophobia and the institutional hostility from heterosexual theology, can we all march under his banner?
I’d like to think so.