Skip to content
Home > All Our Voices > The Tuft of Flowers Revisited: Navarro River Strings Camp 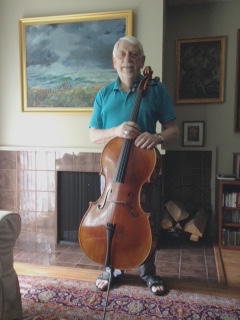 You may know Robert Frost’s poem The Tuft of Flowers, but if you don’t, I commend it to you. The scene is a hay field in the late morning when the speaker has gone to turn the newly mown hay. The mower, having been there at dawn to complete his work, has gone his way. The speaker finds, thanks to a determined butterfly, that in the middle of the field of cut grass, the mower did his job well, leveling all of the hay, but on purpose left standing a single tuft of flowers.

“The mower in the dew had loved them thus,

By leaving them to flourish, not for us,

Nor yet to draw one thought of ours to him,

But from sheer morning gladness at the brim.”

On Thursday evening, I came upon a tuft of flowers. Not real flowers, metaphorical ones, notes on a page, the cello line of the third Brandenburg Concerto. J.S. Bach was the early morning worker who left us the splendor of that concerto, not with any thought of ‘ours to him,’ but with the same motives that the mower had, simple beauty.

The cello and I are fairly recent friends. It’s true that I played the cello in my 20s, but frankly, I remember next to nothing about how I played in those days, perhaps one benefit of a poor memory. When I began (again) last July, I brought the ability to read music, and I knew the names of the strings. So within twelve months to be sat down in front of a composition by Bach didn’t fill me with confidence.

“Come on, Robert, here’s the cello score. We’re going to sight read it so get your cello and join us.” That was from another cellist named Shirley from California’s gold country. Okay, I thought. It’s been a friendly and supportive group and no one at camp rose to be critical of the musical efforts of others. So I sat down and shared the score with her and about ten or fifteen others of us, forming a small chamber orchestra.

There is no easy Bach. Anyone who has ever attempted playing his music knows that, and I was sure that I couldn’t read the score, much less keep up with the group. Fine, I would play what I could and stop when I couldn’t. I’d listen to the ensemble. That would at least be instructive. But we started slowly, counting two measures of 4/4 time, and we read through the first movement. Then we read through it again, this time up to tempo.

I was keeping up! I was reading the score, and I was keeping up! The third time through, I was playing the music, not merely sawing out the notes on the cello. By the time we got to the final chord, I understood what Bach saw when he wrote this work. The beauty of sharing it with this small impromptu chamber group, and with Bach, filled me with inexpressible joy.

“But glad with him, I worked as with his aid,
. . .
And dreaming, as it were, held brotherly speech
With one whose thought I had not hoped to reach.”

I sat there beaming, perfectly ecstatic, reveling in the epiphany of the moment. The woman who had organized our playing looked over to see me grinning like an idiot. “I think Robert would like to play it again,” she said. And she was right. And so we did.

I suppose this all sounds a bit syrupy and gushy, but some of our dearest, deepest emotions, when we own up to them, often do sound that way when we try to tell them out loud or write them down. I can only say that I cannot remember any musical experience before in my life that produced the level of elation I experienced that evening, of being able to play the music of perhaps our greatest composer, coupled with genuine gratitude for Bach’s genius, for the music that reaches across nearly three hundred years, and for his bequeathing us his gift of a tuft of flowers.