The current crisis has had the effect of taking us back to the Anglican tradition of Morning Prayer, not only on weekdays but also on Sunday mornings while we are unable to offer Communion. Those who have joined the Episcopal Church in the last 40 years may find the Morning Prayer service quite unfamiliar, but those of us who grew up in an Anglican Church before the late 70’s may be enjoying this revival of a liturgy that was part of our early formation. In the first church I served as Rector, there was a parishioner who, about every six months, would ask me if we couldn’t go back to having Morning Prayer at least some Sundays each month. He knew my answer would always be no, and after about 5 years he gave up asking. Isn’t it funny how things work out? While I remain faithful to the Eucharistic theology of the 1979 Book of Common Prayer, when it became necessary for us to do something other than Eucharist, I was very grateful that we had a longstanding and beautiful tradition of Morning Prayer to fall back on. Now, those who have come to our tradition since 1979 have an opportunity to experience one of the treasures of the Prayer Book.

Morning Prayer with music is also known as Mattins, just as Evening Prayer with music is known as Evensong. If you attend Evensong you know that some of the greatest liturgical music was written for the canticles that accompany Morning and Evening Prayer, but you may have never heard settings of the morning canticles such as the Jubilate or the Te Deum. Now, thanks to our talented musicians and audio-visual engineers, we are hearing some of these glorious pieces on Sunday mornings. This past Sunday our virtual choir treated us to CV Stanford’s setting in B flat of the Jubilate (Psalm 100, a traditional introduction or “invitatory” for the morning Office). I was struck by the fact that the “Glory be to the Father” verse at the end is the same setting as that which we hear at Evensong when the choir sings the Stanford Evening Service in B flat: it was a comforting moment of familiarity. The 1979 Prayer Book has greatly expanded our selection of canticle texts, but the classic musical settings were composed for the traditional canticles: the Jubilate, the Te Deum, the Benedicite (a Song of Creation), and the Gloria (which we sing in the context of the Eucharist).

The texts of these Canticles are a mixture of Scripture verses and songs from the early days of the church: besides Psalm 100, the Te Deum dates back to the 4th or 5th century AD and was thought to have been composed by St. Ambrose for the baptism of St. Augustine; the Benedicite is attributed to the three young men whom Nebuchadnezzar thrust into a fiery furnace in the story of Daniel (look for the book The Song of the Three Jews in the Apocrypha, or, in Catholic Bibles, in chapter 3 of the Book of Daniel); and the Gloria dates back to the 4th century and is traditionally attributed to St. Hilary.

The canticles are just one example of hitherto hidden gems in our Book of Common Prayer. Rediscovering them is one manifestation of God’s grace in this difficult time.
Your sister in Christ,
Penny

Every Thursday and Monday. Please contact organizer for link / details.

Every Thursday and Monday.
Please contact organizer for link / details. 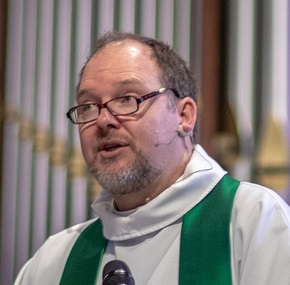 End each Monday through Friday with a casual and intimate group for prayer, reflection, and check-in via Zoom.   Follow along with the

End each Monday through Friday with a casual and intimate group for prayer, reflection, and check-in via Zoom.