Skyline church asked for no applause or outbursts and said they had a “friendship committee” that would escort violators out. Most people kept to this. Rob Gagnon with degrees from Dartmouth and Harvard wowed the crowd at the church with his scriptural juxtapositions of Jesus words and Old Testament prohibitions to argue that Jesus was against homosexuality–very weak. He also harped on incest, polygamy, bestiality etc-and kept putting all of them on equal ground with homosexuality in terms of behavior condemned in the Bible. Jennifer Roback Morse used a lot of the Prop 8 proponent arguments about the need to protect traditional marriage to protect children, women and society generally (a weak argument). 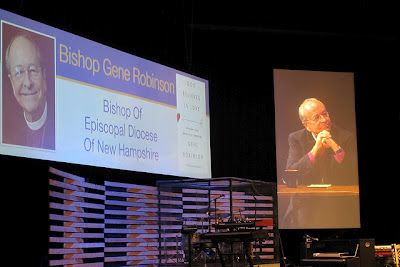 Bishop Robinson and John Corvino focused more on why gay marriage actually protects society and creates strong relationships. Bishop Robinson also talked about his own struggles with his sexuality and his first marriage and his fidelity to it. I think their recounting of their own personal experiences and journeys were much more effective than the reliance on so called academic arguments–but then we were biased.

And that minister at Skyline deserves credit for opening a dialogue and keeping it civil…. We learned a lot.

Two hours in, and the only two people that are making any sense are Bishop Gene Robinson and Dr. John Corvino (both homosexual, defending gay marriage). The opposing two “doctors” are using big words to explain al point that doesn’t exist. The bishop and Corvino are giving examples from their past experiences as a homosexual, while the two opponents giving biblical and historical example that have absolutely no proof or support….in other words, we’re winning!

It was a thrill to see the support of so many Episcopalians in attendance. Because of the sense of community amongst us, we made an important witness in the midst of the gathering. Bishop Gene was ever his usual gracious self, but he never gave in to the bullying. He was always a positive witness.


It was startling to be greeted by security and then behavior guidelines which were announced for the audience. It was interesting in the course of the evening to discover that it was probably in response to perceived or real threats from criticism for hosting this civil dialogue. As Pastor Jim Garlow said, probably no one’s position was changed. It was a model for dialogues between opposite sides. 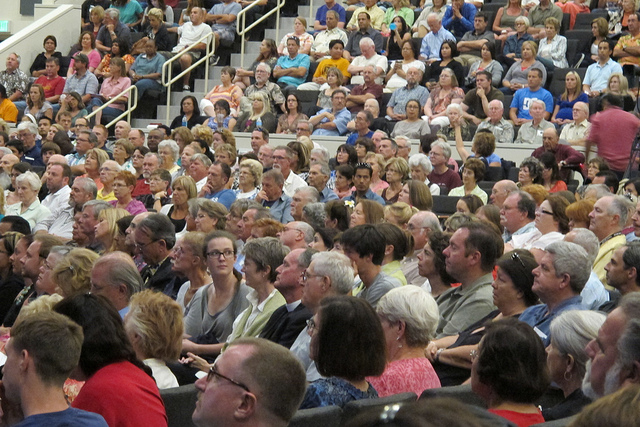