Skip to content
Home > All Our Voices > Lenten Devotions 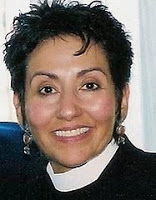 For the law of the Spirit of Life in Christ Jesus has set you free from the law of sin and death. (Romans 8.2)

Traumatized and sobbing, the 13-year-old girl from Guatemala began her story. “In Tijuana they took me to a house where they sold me to men for sex. They warned me not to try to escape because of the dogs guarding the house. If I stayed the abuse would continue and if I tried to escape the dogs could attack me. I turned the doorknob and the dogs began to growl. I prayed to God for help. The dogs held still and let me pass. God was with me. But I can’t sleep,” she cried. As I stroked her hair I said, “The same God who led you out of that house is with you every night, holding you in his love.”

The Reverend Canon Mary Moreno Richardson was recently honored by Episcopal Relief and Development for her work with young people in dire situations (Central Juvenile Hall in East LA, a detention center for undocumented youth, and victims of human trafficking ). She was asked to write vignettes of her pastoral experiences and one of them (April 6) appears in their Lenten devotional, which was distributed nationally. The others will be used by ERD in future publications; we’ll be providing them to you here, so that they can be part of your Lenten journey.