Have you ever noticed the labyrinth painted on the floor of the Great Hall? Ever wondered what those labyrinth walks advertised in the bulletin are really like? Susan and Lisa attended their first labyrinth walk last Wednesday, and sent us this report. 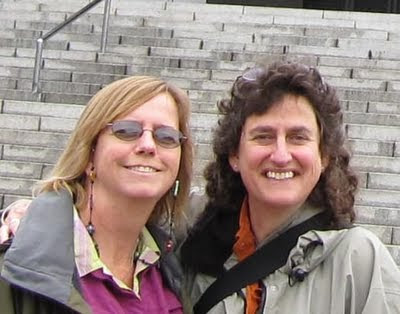 We have been intrigued by the idea of a labyrinth for some time, and finally were able to attend one of the Cathedral’s monthly labyrinth walks, held at 6pm on 1st or 2nd Wednesdays. The labyrinthis a tradition dating from ancient Greece. Since mediaeval times, it has been used as a device for spiritual meditation. The design represents a journey inward, to the center, and then after a period of reflection, a return to the outside world. Unlike a maze, a labyrinth has no choices, so it’s not a puzzle. It is simply a meandering path to a central space, from which you reverse direction to follow the same path out again. One of the classic examples is the labyrinth in Chartres Cathedral. This was reproduced in Grace Cathedral, San Francisco, and in turn in the Great Hall of St Paul’s. 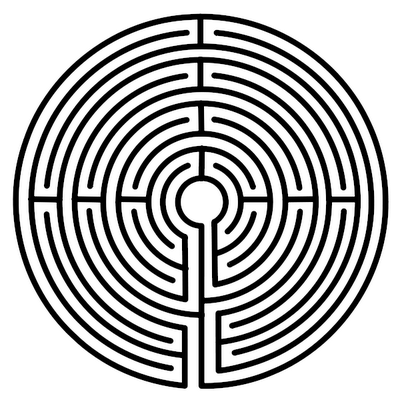 Upon entering last Wednesday, we found the Great Hall dimly lit. Candles outlined the perimeter of the labyrinth, and some modern chant was playing in the background. Three cushions were spaced in the center domain with a few more candles. There were a number of people there, but all were very quiet. and stood separate from one another. A table near the entrance was covered with cards.

I was concerned that the experience would be very structured and, well “church-driven”, which doesn’t work for me. But it wasn’t structured at all. In fact, we looked about rather helplessly to find some guidance as a few regulars stood in a circle around the middle domain to get started. However, in a few moments they returned to the perimeter, where one of the women introduced us to the labyrinth. She pointed to the cards on the table, which each had a single word on them (e.g., “Joy,” “Change”). There was also a book with some ideas of how to use the words as a meditative focus. The cards aren’t required, of course, but are helpful, especially for beginners. She explained the etiquette; people move through the design at different paces, sometimes stopping to reflect or pray. One simply steps aside to allow another to pass. In the center, people stand, kneel, or sit as long as they like before starting the journey back out.

I slipped off my shoes so I could walk noiselessly, and with a focus word to guide me, began my journey into the labyrinth. I set a steady, slow pace and eventually made it to the center, where I stood for some time before returning to the perimeter. I chose to face outward, looking at the journey to come. I found my thoughts wove variations around the theme word I had chosen. Sometimes my attention became very physical, intent on the rhythmic pace I had established, and whether to pivot around the turns, or walk through them slowly. Other times I moved almost automatically. I found it a very tranquil and unexpectedly moving experience.

I entered this evening’s adventure with a hope for instruction and direction. When approaching the unknown, I sought a “recipe.” But there were no instructors or outlines. A few people, a lot of candles and lovely background music. I asked questions of people lighting the candles and learned some general etiquette & contemplative practice ideas. A little nervous, I looked through the focus cards on the table at the front, looking for something Advent-related. Happy with my choice, I entered the labyrinth.

What a journey. I settled in a pace, focused on what’s in front of me, and found exquisite release from time. There’s a dance of sorts with others in the space, as you travel with and around them. But mostly I savored not looking too far ahead, and taking time in the twists… while making the long, straight paths last. Time in the center seemed to stop. As I journeyed outward, I found myself dreading leaving…

I went in with a purpose, a particular goal in mind., and it turned into something bigger—something worthy of further exploration.

Both of us found metaphor in the design of the labyrinth. As in real life, there are straight sections, and sudden turns. The path from one place to another can be longer, and less direct than expected. Lisa found it useful to pause as she reached each turn. Susan used the turns to change the direction of her thoughts with a “but” or “on the other hand.”

If you are seeking a quiet space to think , this is a wonderful tool to provide focus. For the time you are in the labyrinth, you are fully inside, without distraction. The experience can be personal, spiritual, or religious, any way you choose to encounter it—it needn’t be linked to any particular tradition or practice. It does require a certain self-discipline, as there are no structures or rules to lean upon, though the ability to move at will makes it more freeing than some other forms of meditation. And it’s a fundamentally solitary activity, not at all social. Conversation is for outside that contemplative space. We hope to return. 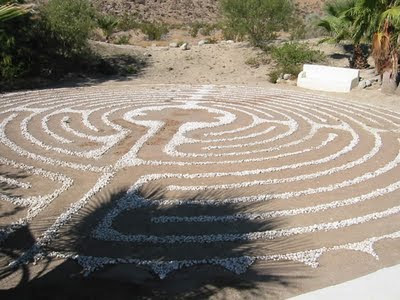 There is also a beautiful outdoor labyrinth next to the small Episcopal church of St Barnabas in Borrego Springs. Having now experienced the labyrinth in St Paul’s, we look forward to our next visit to Borrego and walking that path at dawn or dusk, with the peaceful silence of the desert and the fading violet light.

2 thoughts on “In and out of the labyrinth”